The Living End & The Darts play hard at the Crocodile 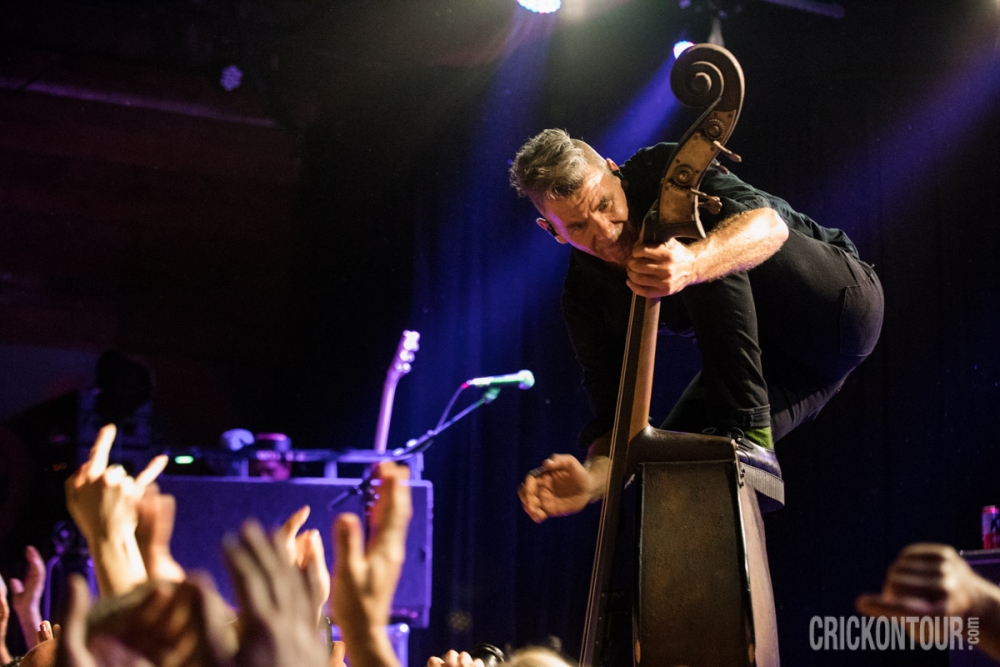 There’s a reason women fall in love with bass players, a social phenomenon on full display during a show featuring upbeat, rockabilly queens The Darts and the down-home stylings of punk rock legends The Living End at The Crocodile this Tuesday. Between The Darts’ Christine Nunez’s coy demeanor, scantily clad in her black lingerie and knee-highs, and The Living End’s Scott Owen’s energetic stuntman performance on the double bass, it was a good night for the rhythm section featuring two veritable super groups.
It’s a tough gig, opening up for a band like The Living End, but The Darts did not disappoint. Showcasing a retro vibe, modern lyrics, and sexy dance moves, The Darts bring to mind Dancehall Crashers, but after hours. Frontwoman and organist Nicole Laurenne played cat and mouse with the audience during the set, who ate up every minute of the Laurenne’s performance. Though their wheelhouse is clearly their set of pop-punk infused rockabilly songs about love, breaking up, and everything in between, their slower, more melodic tunes led by their rhythm guitarist Michelle Balderrama added a nice diversity to their set that would otherwise seem one-note.
The Living End, Australia’s own rockabilly punk group, headlined the show. Though their better-known A-sides were released in the late 90s, the packed house at The Crocodile had no trouble singing along, moshing, and enjoying the strong performance from the three skilled musicians. They sprinkled new material into a set of mostly classic hits and older, swampier songs, including “All Torn Down,” “Prisoner of Society,” and “Second Solution.” The set showed off the handiwork of their three members, with escalating bridges to highlight the talents of this trio featuring Chris Cheney on guitar and vocals, Seth Owen on bass, and Andy Strachan on drums. Their dueling performances that occasionally ended with Owen and Cheney sharing a perch on Cheney’s upright bass meant there was never a dull moment. Epic stage presence, a little smoke and sweat, and a 20-year punk career made for a killer show.

Meredith Smith is a writer in Seattle, whose musical roots date back to mid-90s ska and punk shows. She writes about the intersection of politics and music, as well as upcoming shows and Seattle events.
Related ItemsAlex CrickFeatureMeredith SmithThe CrocodileThe Darts
← Previous Story Thundercat: Drunk and Disorderly at The Showbox
Next Story → First Annual TitanFest Delivers the Goods