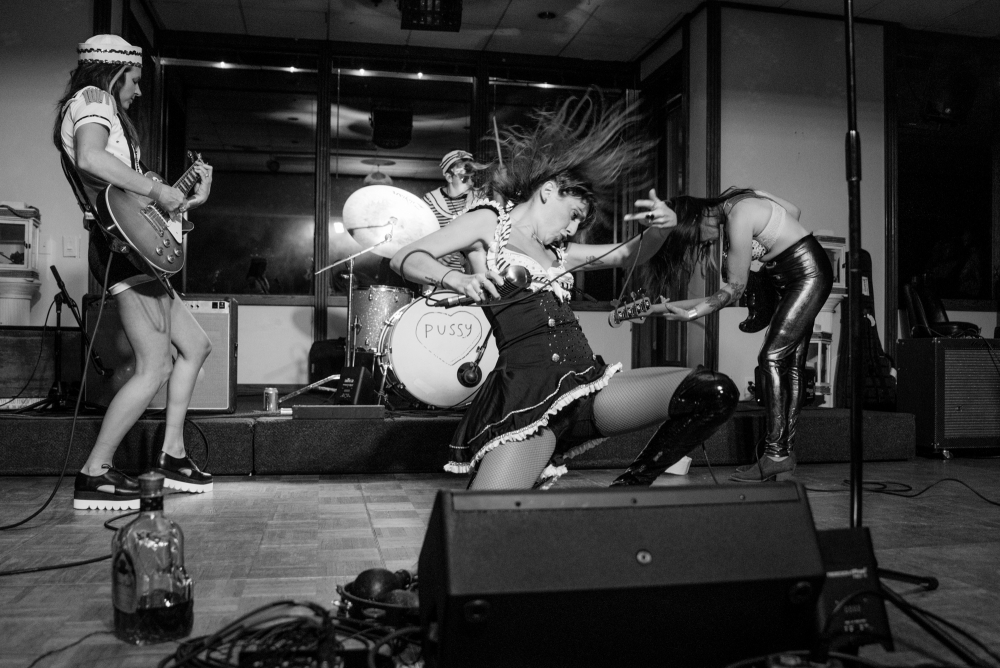 Thunderpussy at the Everett Yacht Club (Photo by Christine Mitchell)

Derek Johnston kicked off the night with only a blue Fender as his accompaniment. After seeing Johnston for so long as the bassist from Fauna Shade, taking in his solo material was a nice surprise and a solid start to the evening. Johnston mixed sinewy guitar melodies with a strong vocal performance, peppering his set with covers from the Beatles (“Cry Baby Cry”) and finishing with a Radiohead number (“You and Whose Army?”).

Kevin Murphy opted for the more traditional acoustic guitar arrangement for his solo set, delivering a solid repertoire of songs while the room slowly filled out and audience members found their way from Mitchell’s photo exhibit and the craft cocktail bar to the stage.

Naked Giants really got the night jumping with their brand of no-holds-barred garage punk… until the PA exploded about two songs into their set. Not missing a beat, both guitarist / vocalist Grant Mullen and bassist Gianni Aiello put their respective instruments down and proceeded to jam out a beat alongside drummer Henry LaVallee, ending with an all-percussion rendition of Queen’s “We Will Rock You” right as the PA kicked back into gear and the rest of their blistering set went off without a hitch.

The crowd erupted as Thunderpussy hit the stage wearing matching sailor outfits, playing to the fact that they were performing in a place usually reserved for weddings and old-money types, and proceeded to burn the Everett Yacht Club to the ground, stopping only a handful of times during their marathon set; once to acknowledge Mitchell’s photography work: “Christine Mitchell, you are a true gem,” lead singer Molly Sides said to a charged audience, which coaxed a four-plus song encore out of the band that included a cover of The Stooges’ “Search and Destroy.”

After the dust settled and the Yacht Club started to look more like a spot that your cousin booked for his second wedding, the patrons of the “SUMMERZOVER” event filed out of the old building and into the brisk Everett night. Maybe EMI was on to something with the name, or maybe the timing was just right, but as I pulled on to Marine View Drive to head home, it started raining.