Closing Night With City And Colour At The Paramount 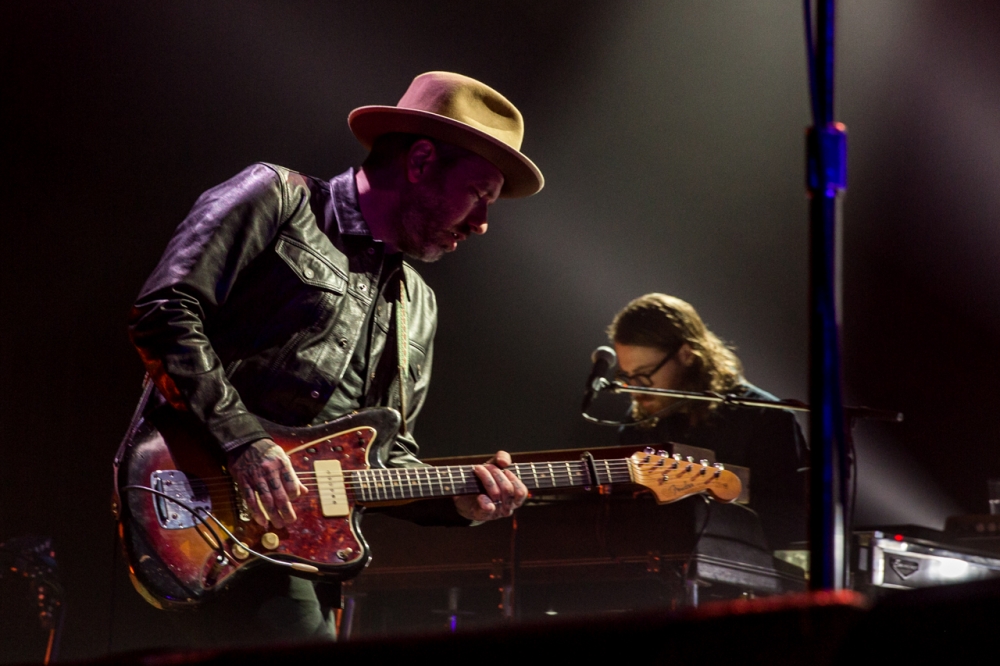 Somewhere between a rock show and a soft place lie City and Colour, the alias of Canadian singer-songwriter Dallas Green. Accompanied by his band, he hit the stage of Seattle’s Paramount Theatre in the final stop of his nearly two-year tour in support of the 2015 album, If I Should Go Before You. The night went from polite to all-out singalong at the drop of a hat, which is par for the C&C course.

Opening the show was local Seattle indie rocker, David Bazan, a prolific songwriter in his own right. The creative force behind early-aught darlings Pedro The Lion, he threw in a couple of those older tunes at the end of a stellar hour-long set. Bazan’s solo career has garnered him plenty of industry fans and it’s clear why. He showcased his uncanny storytelling skills, with lyrics that wrestled with life and death, politics, religion, and relationships; basically, the meat of being human. And his deep, distinct rasp wrapped deftly through an inventive instrumental framework. Not his first tour with C&C, Bazan was still a perfect live partner for opening this show.

The last time C&C were in town, at the same venue, the audience on the main floor was standing. However this time, The Paramount had pulled out the seats, and the crowd filled the venue quietly in preparation for a night of hits. That’s exactly what they got, but C&C didn’t let them get too comfortable.

Green kicked off the two-hour set with a solo “Sensible Heart” under a subtle spotlight before being joined on stage by a full band, but by the time they hit “Northern Blues,” a few tracks in, the band was blowing away the quiet with deep, bluesy guitars. Introducing “Waiting…,” Green said, “This song’s about dying but not in a bad way. Just make sure you enjoy yourselves and live your life. If you’re picking up what I’m putting down go ahead and sing along.” The request was filled by a crowd who knew every word, as they swayed their head in their seats.

But after that, he changed courses to rock out to another favorite, “Wasted Love,” saying, “to those wearing dancing shoes, stand up. Don’t worry there’s slower ones coming and you can sit back down.” You could tell the night was sentimental as he introduced the entire band and crew with care, detailing how they were truly a family after being on the road for so long together. It showed in the cohesive execution of a set for the ages.

During “Hello, I’m In Delaware,” there were a few couples slow dancing in the front row, clearing having a moment, but it was shared amongst an enthusiastic crowd shouting “We love you Dallas” from the rafters. They kicked off a three-song encore with “Little Hell,” Green noting that “It’s been a pleasure to tour with Dave again. This song is directly influenced by him and his music.” But it was “Comin’ Home” that the crowd was waiting for.

Teasing the crowd, who were shouting the request,” Green stopped to say, “So, ultimately some of you are gonna leave disappointed that I didn’t play the song you wanted to hear and I apologize. But I hope that something was sufficient.” And then they delivered.