By Mike Baltierra on November 10, 2017@baltierraphoto 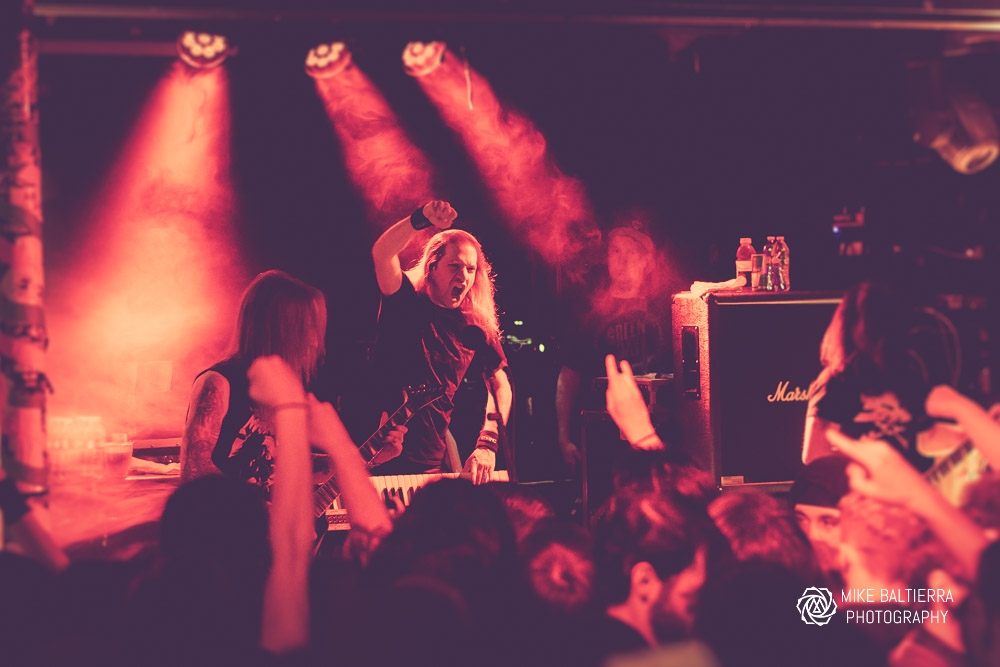 Finnish extreme metal band Children of Bodom, are currently touring North America and made a weeknight stop in Seattle at El Corazon, and their fans came out in droves. The venue was packed to the rafters,  and COB played a set list made up of material that concentrated on their first three releases: Something Wild, Hatebreeder, and Follow the Reaper. The band played material that they haven’t touched in over a decade.

Coming out to a very energetic crowd, the band, which is made up of Alexi Laiho (lead vocals / guitar), Jaska Raatikainen (drums), Henkka Seppala (bass), Janne Wirman (keyboards) and Daniel Freyberg (lead guitar), came out to massive roars and proceeded to rip through “Deadnight Warrior,” “In the Shadows,” “Needled 24/7” and “Hatebreeder.” There was no one in the audience standing still. Everyone was headbanging, fist pumping and, on the floor, a large circle pit that erupted in front of the stage. Other than the obligatory “how are you, Seattle?” the band didn’t waste a lot of time speaking in between songs. “Lake Bodom,” “Warheart,” and “Hate Me!” sounded excellent live, and the band played as a well-oiled machine. What was very impressive was the amount of younger fans who knew the lyrics and sang along with Laiho. He seemed to be impressed as well, stepping away from the microphone a few times to let the crowd take the lead vocal spot.

For fans of extreme, thrash, technical and melodic death metal, the remainder of the evening’s bill had fully satisfied everyone’s palate and taste for metal. In direct support of Children of Bodom were symphonic black metal band Carach Angren, whose members are Seregor (vocals), Ardek (keyboards) and Namtar (drums), and hail from the Netherlands. They are touring in support of their latest effort Dance and Laugh Amongst the Rotten. Their dark lighting and macabre theatrics were a perfect complement for their style of metal.

Finnish thrash metal band Lost Society, made up of Samy Elbanna (guitar / vocals), Arttu Lesonen (guitar), Mirko Lehtinen (bass) and Ossi Paananen (drums) were insanely good. Fast and heavy thrash metal played to near perfection. The band’s set was not nearly long enough, but the material they played was incredible. Their last latest release is 2016’s Braindead, and they full of energy, and the band had the crowd in a moshing frenzy from start to the end of their set.

Up and comers Uncured, who are based out of New York, got the evening started with their awesome progressive death metal.  Made up of Rex Cox (vocals / lead guitar), Zak Cox (lead guitar / vocals), Liam Manley (drums) and Jon Kita (bass), Uncured are touring in support of their debut album, Medusa. This band is awesome live and they need to be on your radar and on your play list.