By Mike Baltierra on November 27, 2017@baltierraphoto 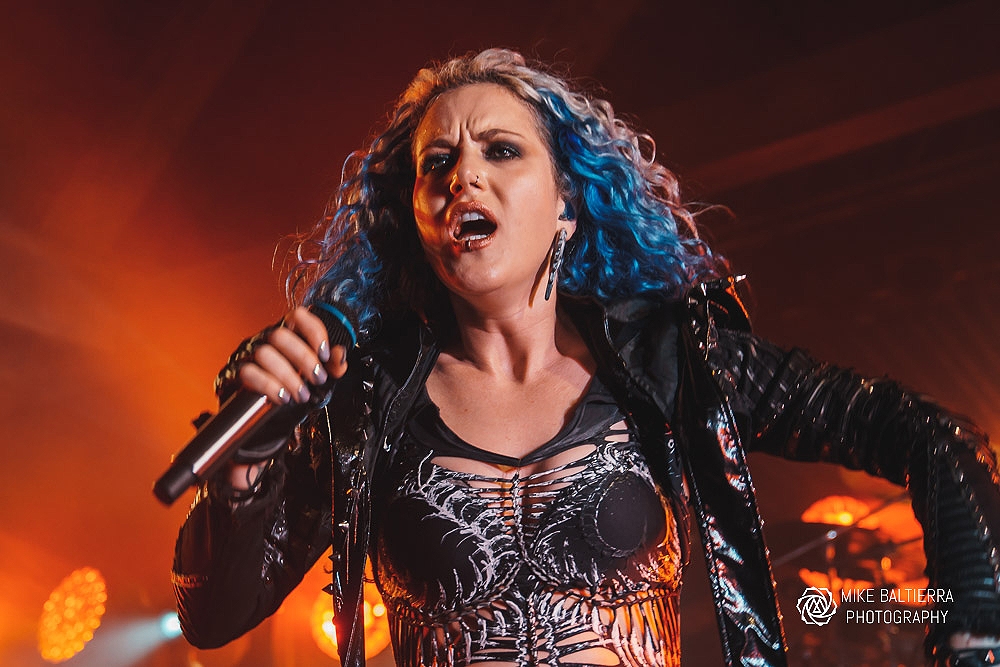 The Showbox Sodo was the place to be the night after Thanksgiving. Many a head banger made their way to the venue early for Arch Enemy and Trivium, waiting anxiously and impatiently for the evening to get started. With the venue packed to the rafters, and with security anticipating a sea of crowd surfers, the room was starting to grow impatient as show time got closer.

Opening the show were deathcore metal heads Fit For An Autopsy, who hail from Jersey City, NJ and are comprised of Tim Holey (guitar), Pat Sheridan (guitar), Josean Orta (drums), Peter Spinoza (bass) and Joe Baldolato (vocals). The band played a brutal thirty minute set with the crowd erupting into a massive mosh pit and the occasional crowd surfer making their way over the barricade in front of the stage.

Next was the metalcore band While She Sleeps who are based out of Sheffield, England. The group is made up of Lawrence Taylor (vocals), Sean Long (guitar), Mat Welsh (guitar), Adam McKenzie (bass) and Adam Savage (drums). Though heavy, the band had cleaner vocals and more melodic style guitar riffing than most metalcore bands. The Seattle crowd were very appreciative of the band’s performance and energy. At one point, singer Taylor climbed his way up into the lighting rig and worked his way from one side of the lights to the other before coming back down to the stage at the conclusion of their thirty minute set.

The stage was now set with a large array of lights, large drum riser and backdrops as the first of the evening’s co-headliners hit the stage. Trivium, who consist of Matt Heafy (guitar / vocals), Corey Beaulieu (lead guitar), Paolo Gregoletto (bass) and Alex Bent (drums) and are based out of Orlando, FL hit the stage with the ferocity of a runaway freight train. Opening with the title track off of their latest release, The Sin and the Sentence, the band took the capacity crowd on a fast and heavy ride. “Down From the Sky,” “Betrayer,” and “Until the World Goes Cold” were played flawlessly, and the tidal wave of crowd surfers covered the large audience from back to front. The only area where there were no surfers was the mosh pit that took up most of the floor right in front of the stage. The band then ripped through “The Heart from Your Hate,” “Thrown into the Fire” and “In Waves.” Trivium played a solid and impressive 75 minutes of nonstop heavy metal and the crowd was happy with what they witnessed. Everyone was now even more ravenous for the evening’s other co-headlining act.

Swedish melodic death metal outfit Arch Enemy, were the final act of the evening and came to the stage to much fanfare and large roars from the crowd. Arch Enemy is made up of Michael Amott (guitars), Alissa White-Gluz (vocals), Daniel Erlandsson (drums), Sharlee D’Angelo (bass) and Jeff Loomis (guitars). The band is touring in support of their latest release, Will To Power. They opened the set with the fan favorite “The World Is Yours,” then jumped into “Ravenous” and “Stolen Life.” The band was on point. The crowd, which was crazy during the opening acts, got rabid at this point. Many sang along with White-Gluz while throwing their hands in the air, giving the obligatory horned salute.

Power drumming and bass playing from the rhythm section, intricate and masterful guitar playing from both Amott and Loomis, and powerful vocals by White-Gluz proved why Arch Enemy remains a fan favorite. White-Gluz is the ultimate front person; betweem interacting with the crowd and her bandmates, head twirling and jumping off the drum riser, she had a demanding stage presence. The band performed many tracks that they are known for, such as “My Apocolypse,” “You Will Know My Name,” “The Eagle Flies Along” and “We Will Rise.” Not a single person in the crowd was standing still. Everyone was moshing, surfing and head banging.

Arch Enemy also performed a solid 75 minute set that was scorching from beginning to end. The night was special, since guitarist Loomis is a Seattle native and he was celebrating his three year anniversary with the band while performing to his home town fans.

The concert was the perfect remedy for a turkey day hangover, and this was definitely one of the best metal shows to hit the Seattle area this year.