By Mike Baltierra on December 5, 2017@baltierraphoto 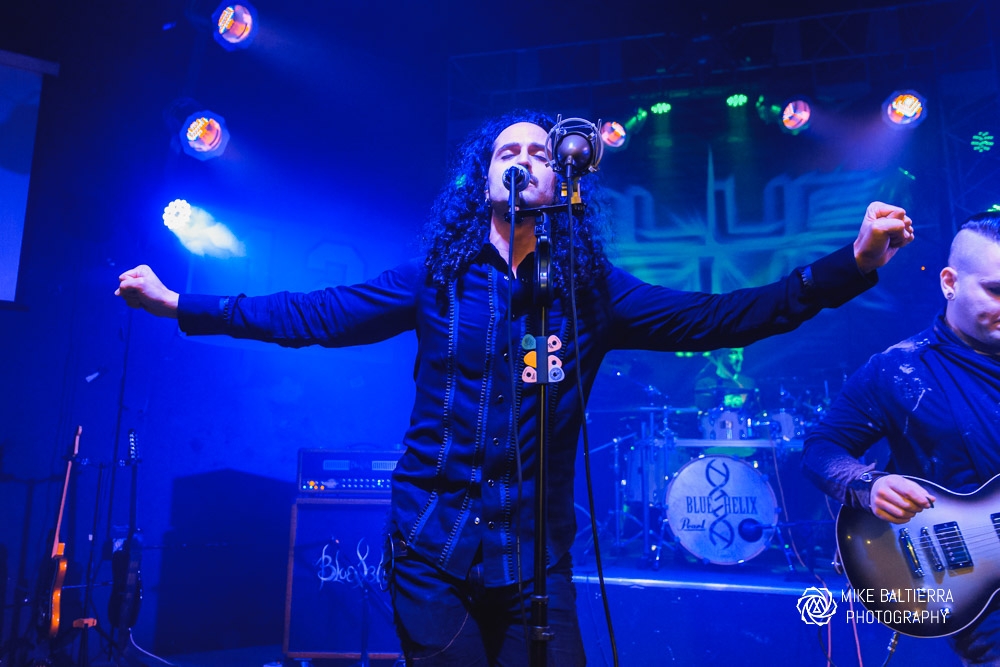 Puyallup based alternative rockers Blue Helix recently dropped their latest musical release, Anti-Social Butterfly, in mid-November. On this December evening, the band celebrated the video release of the lead track and first single, “Anti-Social Butterfly.” Singer Sami Chohfi, along with bandmates Arman Birang (guitar), Marco Bicca (drums), Brandon Wolf Gebhardt (Bass), and special guest Skye Warden (guitar) envisioned putting out a record that was built upon a story and also on a message. When listening to the album, it is very evident that it is a record written with emotion, passion and meaning. That message was perfectly delivered with the video that was produced by local videographers, Tetraknot.

Chohfi addressed the large crowd prior to Blue Helix taking the stage and talked about the team behind the production of the video. Chohfi also thanked the martial arts and self-defense school Ring Sport United, which allowed Blue Helix to come onsite and use their facility to record the story behind the video. He also discussed that there needs to be more awareness to stem the current epidemic of bullying, whether in the work place, school or online. The story within the video depicts a young person who has been facing being bullied throughout school, decides to learn how to defend himself, and eventually defeats the bully in a boxing match.

At the conclusion of the video, Blue Helix proceeded to perform a solid ten song, 45 minute set. Opening with “Anodyne” then jumping into “Despair” and “This Tragedy,” the band sounded solid, Chohfi sounded amazing on vocals; everyone could feel the emotion coming through his voice and words. The band also played some selections off their previous release, Tale of Two Halves. They played favorites such as “Six8,” “Bullets” and the popular “Aliens,” which was the band’s previous video release. All told, Blue Helix put on a stellar performance, especially after spending time on the road in Brazil promoting Anti-Social Butterfly. It is pretty evident that with Anti-Social Butterfly Chohfi had a story to tell, and all the emotions behind the story come through, not only on the record, but also through his performance. The rest of the band were on point and sounded superb. Definitely a great night for the band.

Supporting Blue Helix were Seattle’s Gypsy Temple, who brought their unique sound of rock, blues, funk and jazz with them and won over the crowd. On this night, the band consisted of Cameron Miles Lavi-Jones (guitar / vocals), Hamoon Milaninia (bass), Cory Cavazos (cello), Kai Evan Hill (drums), and Evan Lorbiecki (saxophone). The band played an energetic and groovy set that left people asking for more.

Alternative hard rockers Prelude To A Pistol are made up of Bryan Rohring (vocals), Lee Tillman (guitar / backing vocals), Daemon Chadeau (bass) and Nate Butler (drums), and were second on the bill. They performed a set comprised of original material that went over well with the early evening crowd.

Getting the evening started were alternative grunge hard rocking band Lust Punch, who are made up of Nick Knight (guitar / vocals), Noah Phipps (drums), and Mitch Midkiff (bass). They were a great selection to get the evening started, and they proceeded to rip through an awesome set that was a ball of energy from beginning to end.