By Christine Mitchell on January 1, 2018@Housetornado37 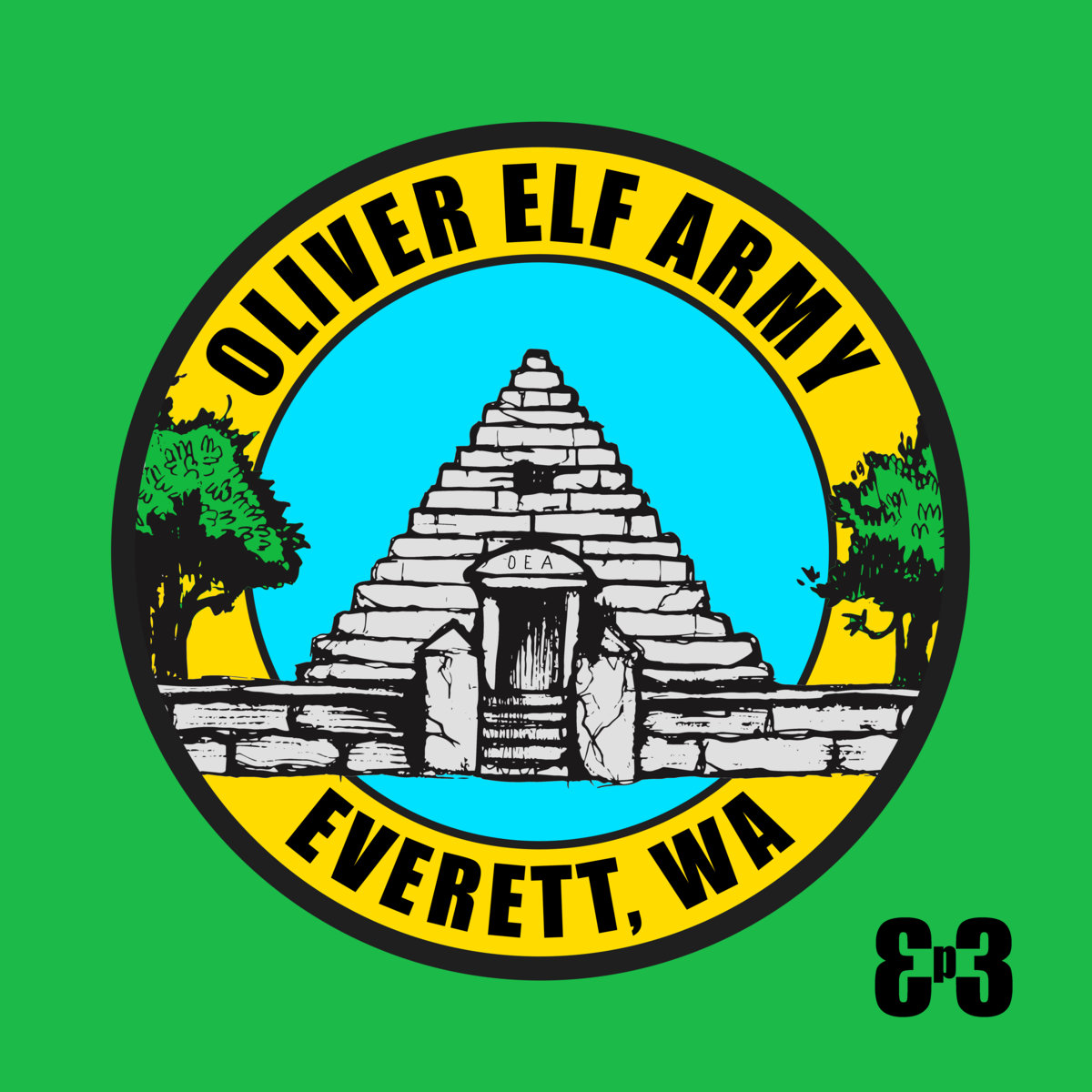 Oliver Elf Army released their third EP, appropriately titled EP3, at 12:01AM on New Year’s Day. This trio of tracks continues the duo’s fine tradition of tackling a broad array of topics using humor, sarcasm, sadness and wit. Recorded in the band’s home in Everett, EP3 is a sneaky gift to the PNW, and those in the know will appreciate the homage to not only the most popular tomb in Everett but also the state flag that graces the cover. Well, actually, it’s a sticker. Again, it’s that goofiness swirled with darkness that makes Oliver Elf Army irresistible.

“Nachthexen” is adorable pumped-up punkiness distilled, though the subject matter concerns female Soviet WWII pilots, the “Night Witches” who flew by night using out of date aircraft, floating in on the wind and dropping their payload on Nazi Germany. This is a seriously infectious anthem for anyone who has felt like punching a Nazi in the face over the last year or so, and you can just imagine what this will sound like live, with the crowd’s fists pumping as they shout out the chorus “Nazi Punks! Fuck off Nazi Punks!” The song is simple in its execution with minimal effects, which serves to whittle the intent to a spunky, sharp point.

“Agatha!” celebrates the famed mystery author’s canon via PBS. But it’s a humorous take on Christie that sounds more like a nod to the Scooby Doo gang, with a wiggy guitar solo and lyrics harking back to bubble gum and the psychy Scooby theme song. Make no mistake, though: these old British codgers need to get to bed, and they sure as shit aren’t riding in any nasty Mystery Machine. Was it Mrs. Peacock with the lead pipe or what? Let’s have tea.

OEA pulls out all the stops for “Infinity Is OK.” It’s a total power ballad Oliver Elf Army style, with washes of Martin Adams’ reverbed guitar layered one over the other in a spacy way, something that recording engineer Simon Nicol handles expertly. Combined with Mary Adams’ hypnotic, swaying drum beat, the resulting effect is expansive, which is perfect for a song about love and death, infinity and being reborn: this is a song that encompasses everything from the universe to a single kiss. Well, there is also a robot revolt thrown in there, but that’s what OEA does so well. They pair the absurd and the heavy, and it’s so damn good that you’ll want to laugh and cry at the same time.

OEA is playing at Black Lab Gallery on January 19th with Leava and Spirit Award. You can learn more about the performance here.

Christine Mitchell has been poring over album liner notes pretty much since she acquired the skill of reading, and figured out the basic structure of rock songs at an early age. Whether it’s the needle popping into the first groove of the record, the beeps that signal the beginning (or end) of a cassette tape, or digital numbers ticking off the seconds from zero, music brings Christine happiness, ponderous thought, opportunities for almost scientific study, and sometimes a few tears. When she started attending live shows two decades ago, a whole new piece of the puzzle clicked in and she has been hooked ever since.
Related ItemsChristine MitchellEP3FeatureMusic ReviewOliver Elf Army
← Previous Story Hot Seat: Matthew Schwartz of Pacifico
Next Story → Blue Helix Premiere “Anti-Social Butterfly” Video