John Maus Terrifies and Delights at the Crocodile 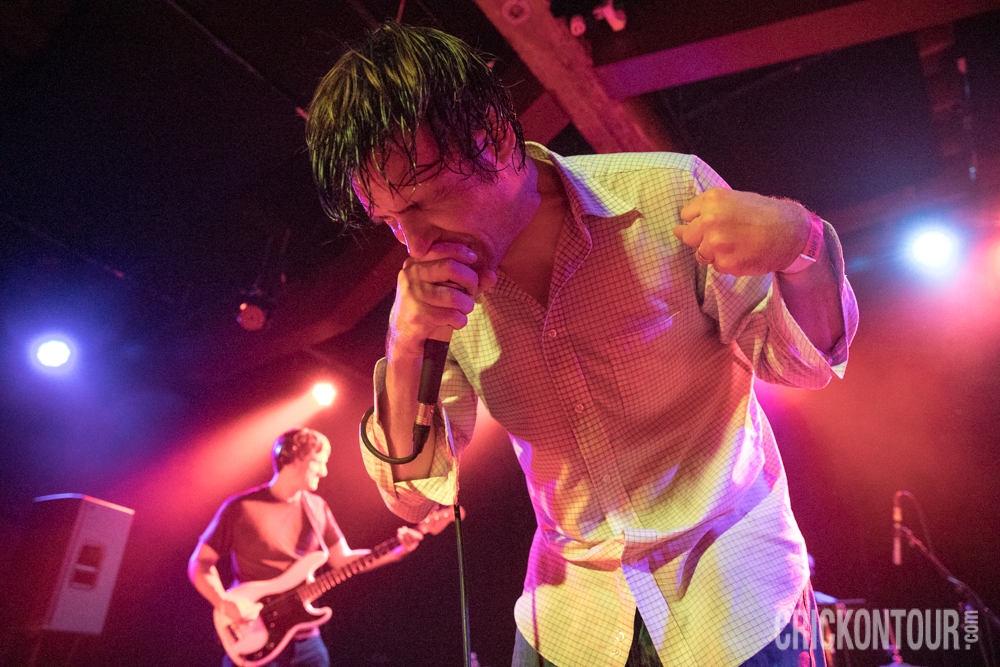 There is something slightly terrifying about a John Maus performance. His music–especially 2017’s Screen Memories–is apocalyptic and drenched in doom. But as he delivers his songs live, he appears to be genuinely tormented by them. His face contorts, and his body seems to punish itself as he exhibits his trademark moves: hitting his head with his hand and microphone, wringing his shirt, and clutching his chest. His stage presence is alarming, but it’s also immensely entertaining, and entirely void of gimmicks. In fact, it’s his authentic expression that makes his live show so compelling. Fans are entertained not by his torment, but by his lack of inhibition, and his ability to share so much of himself.

Opening his sold-out Crocodile debut on January 23rd with an icy rendition of “Castles in the Grave,” from his 2012 collection of rarities, Maus and his first ever backing band began an hour-long set which prioritized breadth over recent material. As his unintelligible wails reverberated throughout the venue, his arms stretched up and out rigidly towards the audience, his grimace, clenched eyes, and taut fists a warmup for the intensely physical performance ahead.

The show picked up when Maus and company launched into the brisk crowd favorite “Rights for Gays.” Even before singing a word, Maus began his side-to-side torso banging, moving unnaturally fast for the wide range of motion. The crowd went wild for his odd movements and the song’s straightforward chorus: “Rights for Gays, oh yeah…” and “medical care for everyone.” During the band’s fifth number, a groovy, twinkling performance of the kinetically arpeggiated “Streetlight,” Maus pumped his arms and fists encouragingly, as the crowd voraciously cheered him along. Earlier that day in an interview with KEXP, he worried his music wasn’t danceable enough. The Crocodile crowd assuaged his fears as they side-stepped to one of his most infectious synth-pop tracks. Not that he could tell; he didn’t even open his eyes until a late set rendition of “Bennington,” when he looked out into the crowd in sheer horror.

In contrast, there were also a few wonderful moments of sonic levity, like the song “Pets,” which surprised and delighted with its matter-of-factness in the face of pet mortality. Similar to “Rights for Gays,” “Pets” uses lyrical repetition, a groovy bassline, and an unfailingly upbeat synth line to meditate on one of life’s irrefutable certainties about our beloved furry friends. Keyboardist Luke Darger’s baroque harpsichord trills were immaculately rendered, making the song all the more comical in its frankness and simplicity, a strange earworm of headbanging proportions.

Like his new album Screen Memories, Maus’ set was over in a flash. Just 45 minutes after they had begun, the band stepped off stage, Maus staggering away, drenched in sweat. During the encore, a spirited take on mellow “Believer,” the crowd’s raucousness crescendoed as Maus uttered the conclusive line, “And I’m not coming back.” And with that, Maus acknowledged his fans with a spirited arm pump and a singular head pound before retreating for the evening.

And the fans? John Maus fans are a special group of musicheads. They are all-in: devoted, dedicated, enamored by his music, and in awe of his artistry. And they’re never casual about it. They’ll buy his campy tour t-shirts (one of each, please!), and pre-order his career-spanning six album box set like it’s going out of style. They’ve got a username on mausspace.com, and have read everything there is to know about the Girl from Bennington. They are, indeed, a cult following.

Opening the show was John Maus collaborator Holy Shit, aka Matt Fishbeck, who played an unassuming set of mellow tunes from under his dark shades and tussled hair. Fishbeck’s set was a bit flippant and stylistically wide-ranging, and the audience’s interest seemed to wax and wane alongside Fishbeck’s emotionally detached, mumbled banter. Set highlights were Fishbeck’s modest rendition of a song he co-wrote with John Maus and Ariel Pink, “Bombs Away,” and when he picked up the tempo and brought out an omnichord in the final song of his set. (An omnichord is a curious instrument manufactured by the Suzuki Instrument Corporation in the 1980s. Watch Fishbeck play it on a toilet in this delightful little video.)