DOTV benefit at Neumos this Saturday

By Christine Mitchell on February 5, 2018@Housetornado37 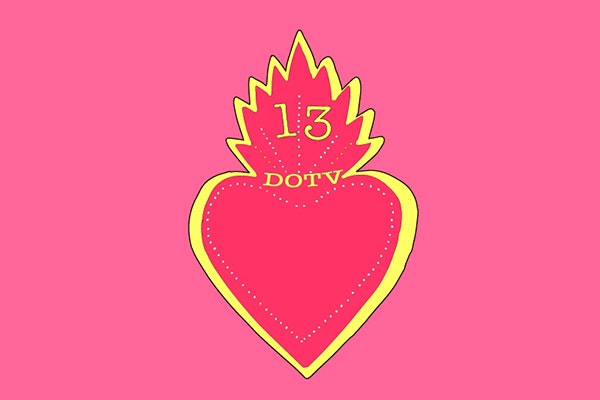 Most folks celebrate their birthdays each year with a slice of cake in the company of friends and family. Dancing On The Valentine‘s Jenny George has put on a benefit concert for her birthday (Valentine’s Day) for twelve years, and this year, the thirteenth, is no different. Or is it? George, a survivor of childhood leukemia, takes nothing for granted. She beat the disease over twenty years ago at age 16, and for her, every year is a gift. Her aim with DOTV, a fundraiser for the Leukemia and Lymphoma Society, is to raise money to find a cure and to help other children going through treatment. George is a mother who was told she would never have children; she was told she had less than thirty days to live when she was diagnosed. She beat the odds and hasn’t stopped giving back since. 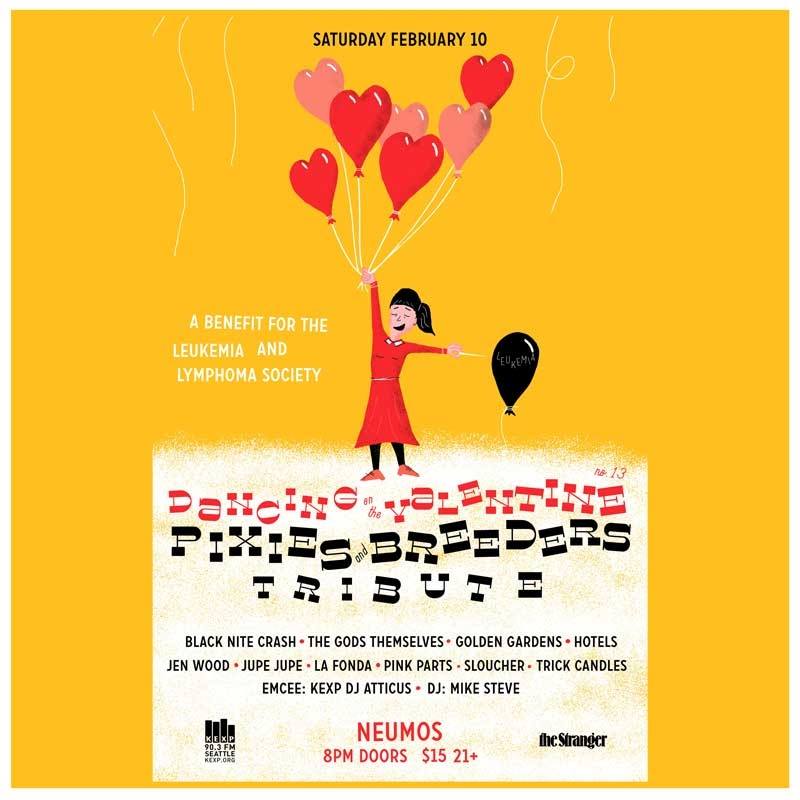 This year’s benefit, held at Neumos on Capitol Hill this Saturday, February 10th, is a tribute to 90’s college darling bands Pixies and The Breeders. DOTV has traditionally been a “tribute” style event, with bands covering everything from Duran Duran (whose music George credits as a huge part of her recovery) to Madonna, David Bowie, The Cure, and songs from John Hughes films. Pixies started in the mid-eighties as well, with The Breeders following in the early nineties. The title of the benefit, “No. 13 Baby,” is a reference to a song off Pixies most critically acclaimed album, Doolittle.

DOTV 13 has a full roster of bands to bring the songs of Frank Black and Kim Deal to life. The night will be plenty full, with performances from Black Nite Crash, The Gods Themselves, Golden Gardens, Hotels, Jen Wood, Jupe Jupe, La Fonda, Pink Parts, Sloucher, and Trick Candles, with emcee duties by KEXP DJ Atticus and tunes DJed by Mike Steve. The Gods Themselves in particular have been actively raising money to fight cancer in the past year, having also performed at Métier last March in support of SMI founder Greg Roth’s Obliteride team, #WeRideWhy. Roth has found inspiration in George’s story, friendship, and connection to music, and his forthcoming documentary, also titled #WeRideWhy, chronicles this as well as the story of Roth’s own mother, who passed away at an early age due to cancer.

The truth is, we probably all know someone whose life has been affected by cancer. There are happy endings, and there are tragedies. Jenny George is celebrating life while working to ensure that the tragedy of losing a loved one to cancer becomes a thing of the past.

Christine Mitchell has been poring over album liner notes pretty much since she acquired the skill of reading, and figured out the basic structure of rock songs at an early age. Whether it’s the needle popping into the first groove of the record, the beeps that signal the beginning (or end) of a cassette tape, or digital numbers ticking off the seconds from zero, music brings Christine happiness, ponderous thought, opportunities for almost scientific study, and sometimes a few tears. When she started attending live shows two decades ago, a whole new piece of the puzzle clicked in and she has been hooked ever since.
Related Items#weridewhyBlack Nite CrashBreedersChristine MitchellDancing on The ValentineDJ AtticusDJ Mike SteveFeatureGolden GardensHotelsJen WoodJenny Georgejupe jupeLa FondaLeukemia and Lymphoma SocietyNeumosPink PartsPixiesSLOUCHERThe Gods ThemselvesTrick Candles
← Previous Story Katy Perry’s Tacoma Dome spectacle
Next Story → MØ coming to Showbox SoDo