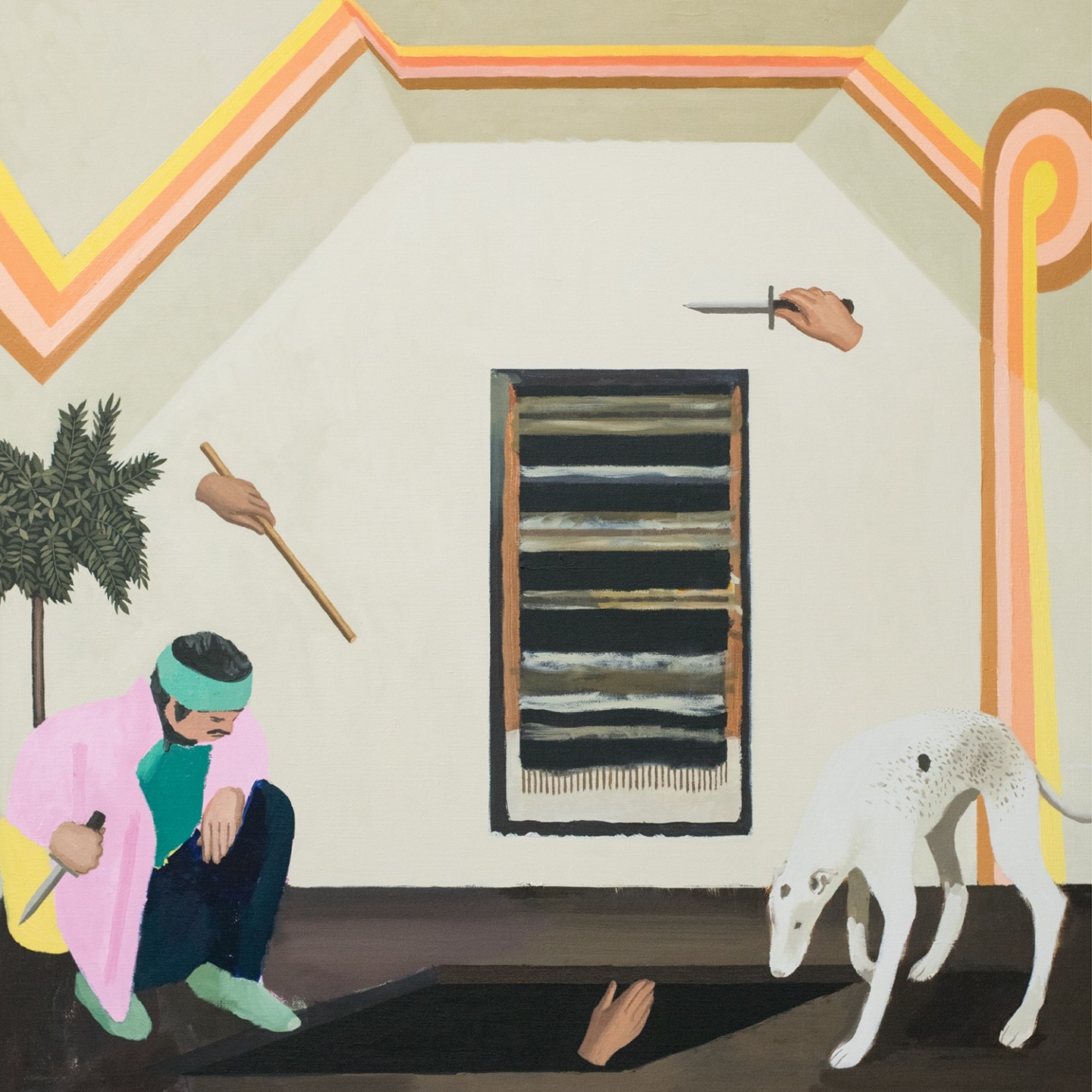 As the sheer number of records in existence grows each year, it is becoming less common to come across an album or band that is wholly unique. On Rock Island, the newest release from Philadelphia art rock band Palm, an intention is set – to create an avant-grade frenzy of atypically structured songs that almost defies description. Principally written by guitarists/vocalists Eve Alpert and Kasra Kurt, Rock Island has a strong chance at being one of the most important releases this year, and the accolade would be well deserved.

Palm does not play rock music traditionally. Any existing write-up of their music echoes similar sentiments; Palm’s distinct brand of deconstructed melodies and erratic polyrhythm remains unmatched by their contemporaries. On Rock Island, Palm elevates these anticipated themes to surprising new heights, all centered around a palpable mood of island living. Arriving for the first time in their music, Palm implements a steel drum MIDI voice for guitar and drum tracks in several songs, two of their singles (“Pearly” and “Dog Milk”) being prime examples. Bright and striking, the steel drums perfectly clash with delicately picked guitar chords; imagine each string being deliberately plucked one after another, creating a slow-mo sweeping effect. All the while, bass riffs that would feel at home in free jazz match with equally disjointed drumming, courtesy of bassist Gerasimos Livitsanos and drummer Hugo Stanley. If this sounds overwhelming, that’s because it absolutely is.

Timing is extremely loose in moments of this record, as seen in the final minutes of the twinkling, mechanical “Forced Hand.” Palm isn’t afraid to get psychedelic with that concept either, the heady highlight of the album being an ambling and vivid late-album track, aptly named “Color Code.” Palm plays with repetition in a sweetly jarring manner; despite several instances of riffs or rhythms repeated over, and over, and over (see “Heavy Lifting”), there is not a single millisecond on Rock Island that could be perceived as dull. In fact, the songs are so oddly shaped that some listeners might be initially turned away; trust that the record takes time to fully digest, and know that the band’s sound is, by definition, polarizing.

“Theme From Rock Island” deserves notice, as the short instrumental cut assists the listener in realizing the album’s concepts. As mentioned earlier, the record’s title is no coincidence, as the majority of the songs here do put forth subtle vibes of island music, carefree existence, and pleasant solitude. Palm’s attempted expression of these ideas and their signature sound could not seem farther apart; however, the juxtaposition of these two worlds is perfectly achieved here. Of further note are tracks like “Composite,” “Bread,” “Swimmer,” and “(Didn’t What You Want) Happen,” where Alpert and Kurt’s vocal melodies, pseudo-traditional rock rhythms and chord structures echo memories of Brian Wilson, albeit on a heavy dose of hallucinogenic mushrooms.

If the feeling of this record remains a mystery after absorbing this review, good; the remedy being to find Rock Island online or in physical format right away, and to give it a listen. Rock Island is out today via Carpark Records, and is available on most streaming music services and Bandcamp. Palm will be performing in Seattle at Barboza on Thursday, March 1st, with Spirit of the Beehive and Hoop. This concert should not be missed.

Paddy Moran is an active musician and participant in the bustling Seattle music scene. When not discussing his extreme distaste for eggs (any style), Paddy can usually be found fumbling around, looking for lost personal items and accoutrements. Have you seen his backpack? It was right here a minute ago; someone must have moved it. In his personal life, Paddy requires almost constant, near-24/7 audial stimulation, which explains both his undying love for new music and why he won't just stop talking already. Oh, there's my backpack. I mean his.
Related Itemscarpark recordsEve AlpertFeatureGerasimos Livitsanosghost handsgreg barukHugo StanleyKasra KurtPaddy Moranpalmrock island
← Previous Story Strawberry Mountain’s “Super-Neuro Tropical”
Next Story → Fisherman’s Village Music Festival Lineup Announcement 2018