By Christine Mitchell on February 17, 2018@Housetornado37 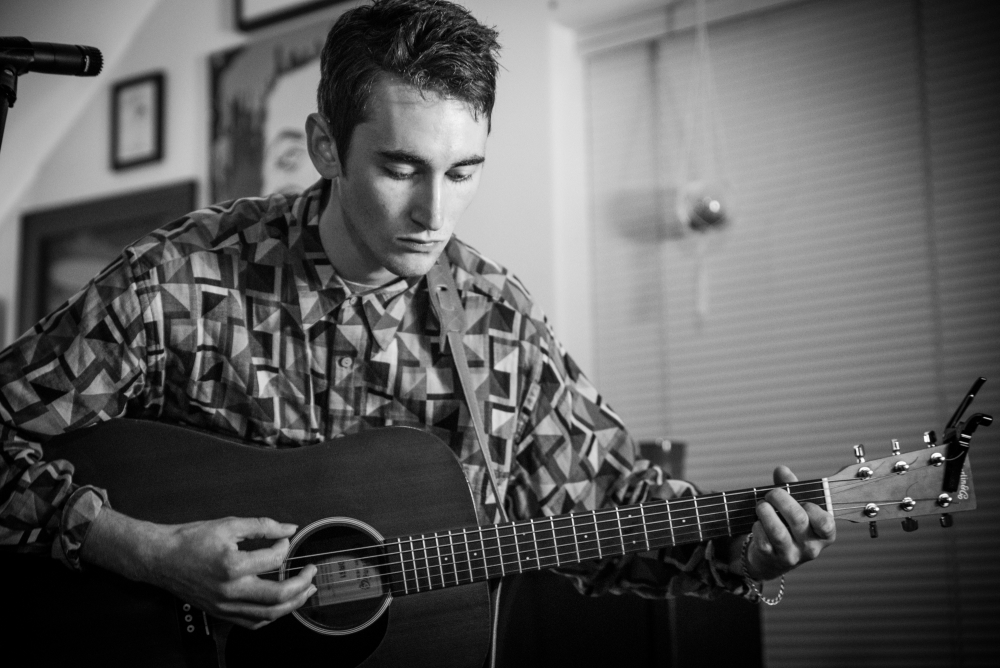 Late Nights podcast hosts Taylor Best and Aaron Hale may seem “prickly” (their own description) and rather rebellious (pot features heavily into this and Best’s other major venture, Skumbag Co.), but a closer look reveals a deeper truth: these dudes are simply playing hard while working hard to highlight and connect with creatives of all types in the burgeoning Everett scene. This drive was on full display at the inaugural Late Nights Last Call Showcase, an intimate house show that was invitation only and featured an eclectic lineup of five local musicians and one poet, each performing for 20 minutes, recorded and streamed live in 360 degree video on Facebook.  Though the event was BYOB, there was an open smoke bar, and haze thickened throughout the room over the course of the night. This made for a very mellow vibe, but the artists kept things intense via excellent, engrossing performances and droll emceeing by co-conspirator and all around renaissance man Alex Vincini.

Narrow Tarot is a musical collaboration between Tessa Tasakos (keys) and Trevor Fett (guitar). The band is so new that they don’t yet have an online presence, but after hearing them play it’s no surprise to find them listed on the Fisherman’s Village Music Festival lineup this year. Their music leans toward quirky folk, yet there is a dark edge that keeps Narrow Tarot from being too sweet. Fett started off with a couple of his own tunes, then Tasakos joined in for a few Narrow Tarot tracks, and then she finished the set with two solo songs. It was fascinating to have an eye and ear into the differences between the two and then being able to hear what they do together. If you’re headed to Fisherman’s, check them out.

Next up was Chance Osborne, who surprised the room by bringing in local reggae faves Cannon and The Lion of Judah to play with him. They proceeded to fill their time by playing impeccably executed reggae tunes. Heads bobbed along as smoke tendriled up to the ceiling.  Rio Chanae is a musician and poet with many ties to the local Everett scene, and on this night she wowed the room with just her powerful voice and her keyboard. Her emotional songs seemed at times to emanate from her entire body, her strong vocals projecting fiercely. Those present were enthralled; hopefully we will be hearing more from Chanae in the future, because she has talent in spades.

Apollo and The Rockets were the next band to play, and they’re another group set to hit Fisherman’s Village this year. This night’s set featured a stripped-down lineup of just Apollo himself on keys and Late Nights’ own Hale on guitar; normally there would be a full band including horns. But no matter; Apollo and Hale grooved no matter what, their soulful R&B permeating the walls. It was warm and sexy. Folk musician Savanna Woods closed out the musical portion of the night with an impassioned clutch of acoustic tunes.

The evening came to a close with a poetry reading from David Callaway, who writes under the name of David Arthur (and has written for SMI). He arrived late in the evening, fresh from a reading/release party for his new chapbook, Punished By The Pearl. He proceeded to read from Pearl as well as other works, sharing a body of work that was intensely personal and broken, yet strangely heartwarming and funny. Calloway’s tales of relationships cresting and crashing put those present on a sublime ride full of ups and downs. One little twist was Hale’s impromptu accompaniment on acoustic guitar, forcing Callaway’s words into a new tempo and adding even more push and pull. One might think that a poetry reading as a boring end to a night of music, but in this case it was perfect. Callaway’s words were just as compelling as those who performed before him.

The Last Call Showcase is promised to be a monthly occurrence, and if the debut is any indication, it’s going to be a can’t miss occasion every four weeks. The dedication of the Late Nights crew to shining a light on up and coming as well as established local artists is not only admirable, it bears close watching.

Christine Mitchell has been poring over album liner notes pretty much since she acquired the skill of reading, and figured out the basic structure of rock songs at an early age. Whether it’s the needle popping into the first groove of the record, the beeps that signal the beginning (or end) of a cassette tape, or digital numbers ticking off the seconds from zero, music brings Christine happiness, ponderous thought, opportunities for almost scientific study, and sometimes a few tears. When she started attending live shows two decades ago, a whole new piece of the puzzle clicked in and she has been hooked ever since.
Related ItemsAaron HaleAlex VinciniApollo and the RocketsChance OsborneChristine MitchellDavid ArthurDavid CallawayFeatureLast Call ShowcaseLate Nights PodcastRio ChanaeSavanna WoodsSkumbagTaylor Best
← Previous Story Gogol Bordello heading to Neptune
Next Story → NEW MUSIC – “We Can Do It” from OK Sweetheart