George Clinton: P-Funk at the Sodo 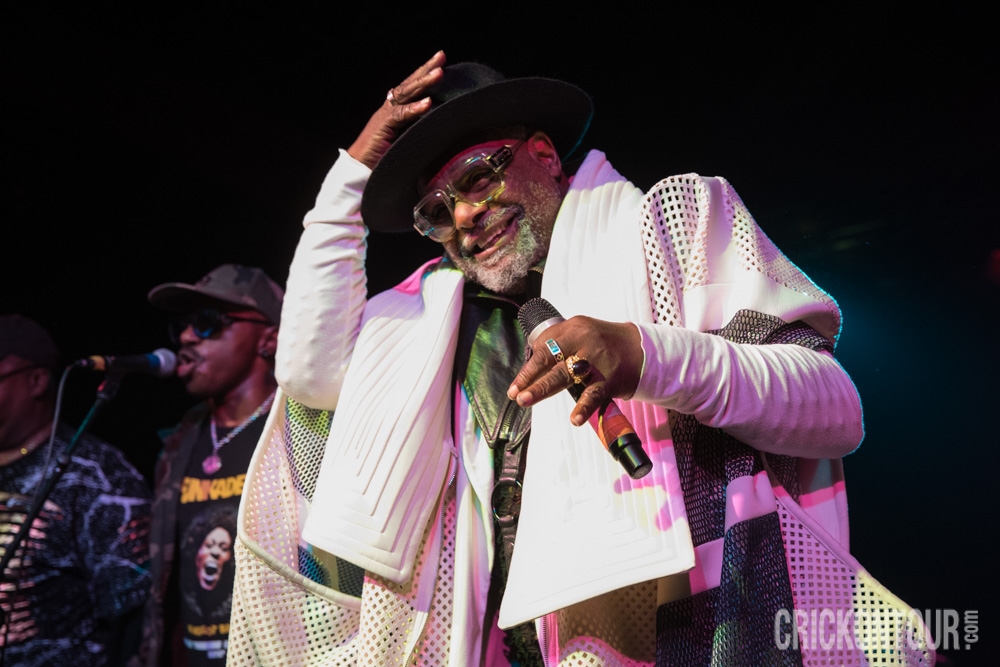 George Clinton at the Showbox SoDo (Photo by Alex Crick)

At times, George Clinton‘s performance at the Showbox SoDo on March 24 felt like a well-earned victory lap. The 76-year-old songwriter has, after all, spent more than four decades at the helm of his ever-changing funk music collective Parliament-Funkadelic, and in that time, the group’s influence on popular music has only amplified, with subsequent generations of hip-hop artists literally building hit songs atop P-Funk grooves.

Never one to shy away from endorsing or even collaborating with his many musical heirs, Clinton started the concert with a medley that segued seamlessly from old to new, funk to rap, connecting the dots between Funkadelic’s long-time call-to-action “Get Off Your Ass and Jam” and Lil Jon’s “Get Low.” Though many of the group’s founding members have passed, more than a dozen collaborators spanning generations packed the stage from the outset, each trading solos and shots at the mike when they weren’t just guiding the audience to get down.

Clinton served as the comparatively calm nucleus at the center of this rollicking onstage ecosystem, emerging in a white mesh robe and gleaming horned crown, which was quickly replaced by a feathered fedora for the remainder of the show. His regal getup and commanding presence helped make him the center of attention even as he ceded the spotlight often to his band mates. Throughout he was always on-hand to express his approval for their virtuoso playing with a point and nod of approval, or to induce screams throughout the audience with just one hand raised to his ear.

“Everybody say yeah!” were his first words of the night. And when George Clinton tells a crowd to do something, they listen.

The sax wailed the medley’s climactic solo, and with it every instrument reached a similar fever pitch of rhythmic intensity to end the set’s first song. There was hardly time to breathe before “Cosmic Slop” kicked in to follow. The pace set here continued throughout the concert, which skipped the traditional encore for a marathon-like run of jammed out P-funk classics lasting just past 1 a.m. It was understandable, then, that Clinton occasionally took a seat on the drum-riser while presiding over the jams — it was exhausting enough keeping up as an audience member.

Luckily, Clinton and company know how to keep themselves as well as the audience hyped up for hours, alternately leading everyone to chant along, clap their hands, sway their arms, raise the roof, and even do the monkey — something only Clinton can make look cool. In short, they make the songs feel collaborative, so the party atmosphere pervading onstage overflows to infect even Seattle’s typically-reserved concertgoers.

A propulsive trap beat gave way to a slightly slowed version of “One Nation Under a Groove,” which in turn exploded halfway through into the more uptempo “Flash Light,” another P-Funk signature and their first-ever number one on the R&B charts. And with this, out came yet another band member, a sculpted, shirtless man sporting a fuzzy vest and elongated false nose — the avatar of Sir Nose D’Voidoffunk, a character from the same album Funkentelechy Vs. the Placebo Syndrome and common fixture of P-Funk’s absurd mythology. He performed a few headstands and acrobatic somersaults at center-stage before challenging Clinton to bust a move himself.

The tried-and-true songs all seemed to rush out of the gate fully-formed, then Clinton and company keep finding ways to pile on more instruments, more beats, more face-melting psychedelic solos. Speaking of which, one of the night’s undeniable highlights came when most of the group exited offstage for the deeply-affecting extended guitar solo that is “Maggot Brain,” which couldn’t help but feel like a tribute to the  late, great Eddie Van Hazel. Watching the current guitarist’s fingers blaze across the fretboard to recreate his career-defining solo was still something to behold.  The solemn atmosphere was soon shattered by the warehouse-shaking singalong of “Give Up The Funk.”

It’s probably not an original observation to say a Parliament-Funkadelic show feels most like George Clinton’s three-ring circus of good vibes, with entertaining and enthusiastic performers to watch in every corner of the stage. Among the most memorable this time around were: the two stylish female backup singers who delivered the night’s only ballad; the male bassist(?) wearing a white skirt and helicoptering his long rainbow-colored dreadlocks with each song; the squat saxophonist who led the crowd in a round of scatting during the performance of “(Not Just) Knee Deep;” and the chrome-toothed, Seahawks-hat-wearing rapper who, in the night’s penultimate song, revealed himself as Clinton’s grandson Tra’zae, the “third generation of P-Funk.”

This was an unexpectedly sweet tribute to the enduring impact of Clinton’s collective approach to music, just before the big finale. The opening bands and backstage crowd flood the stage for one last groove, with a couple women gamely grinding against Sir Nose and Clinton himself. For the final song, Clinton made full use of his husky pipes, straddled his mike stand, flashed the “devil horns” hand gesture, and removed his hat in thanks before signing off.

One of the collaborators who shortly followed suit had the final, self-effacing word: “On behalf of George Clinton and Parliament-Funkadelic, thank y’all for tolerating us.”

We did much more than tolerate.