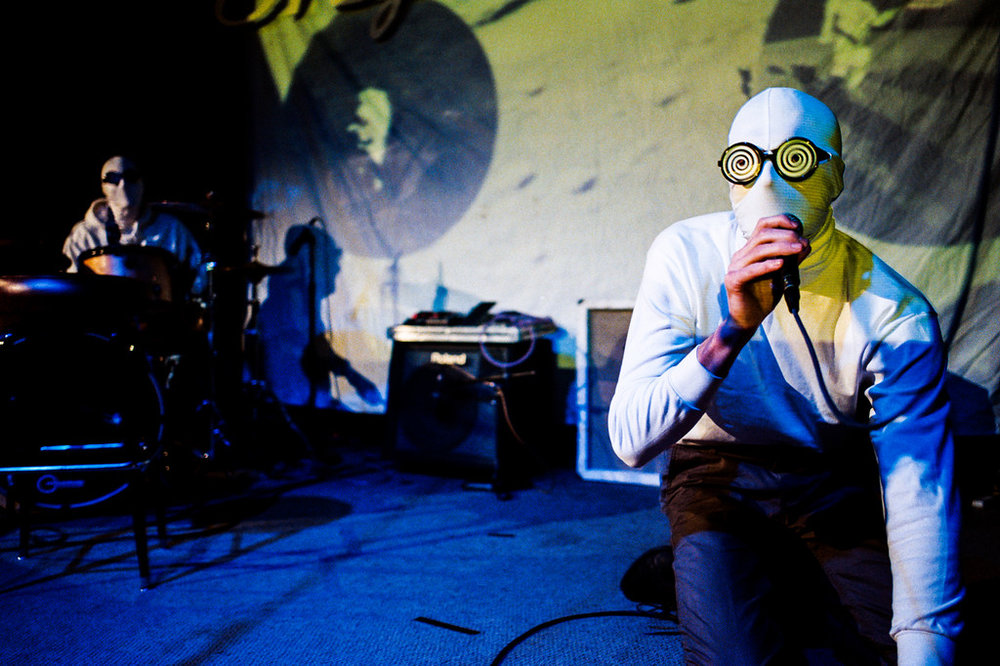 Local musician and specter Mr. Spaceman (Shit Ghost) has an important message for the human race – leave Earth now, or prepare to face the end of days. Coming to yet another crescendo in his successful venture into music, visual art, and comedy, Shit Ghost will be unleashing his anticipated sophomore record, 2: Photos of Bread, with a release show packed full of exciting local music. This powerhouse of a bill will take place on Thursday, May 24th at the beloved Neumos, and will feature Shit Ghost along with Erik Blood (who produced and contributed synth to 2: Photos of Bread), Newaxeyes (local experimentalist wizards fresh off their latest release, BLACK FAX), and Wall of Ears (experienced psychedelic-pop overlords and close musical comrades of Shit Ghost).

2: Photos of Bread has already been teased to the music community via the singles “Melt Your Brain” and “So What” – both of which can be experienced through their dazzling and deeply artistic music videos (check them both out here). Blood’s synths on the record take Shit Ghost’s music to some extraterrestrial terrain; meanwhile, the psychedelic and dance-oriented elements of Shit Ghost’s own style are not lost, bursting through both the released tracks. Even through all of Mr. Spaceman’s humor and wit (see his fainting goat infomercial and zany news segment with Pickwick’s Galen Disston), 2: Photos of Bread is an eccentric and emotional journey into the current state of his mind – which occasionally contains some less than happy thoughts.

SMI’s Paddy Moran spoke with Mr. Spaceman about his music, the quest he faces here on Earth, and the nearly-unavoidable and looming destruction of the human race:

Paddy: Mr. Spaceman, are you there?

Doing good. I’ve been looking you up and kind of learning a little bit about your journey –

It’s been interesting to observe, that’s for sure. I was wondering if you felt a noticeable loneliness, or any sort of sadness at all, before meeting your counterpart?

Uh, I think it’s common in any scenario when you’re kind of like an outsider, and you are visually observant as an outsider, to feel somewhat lonely. So, the answer to that is yes, of course. And I think part of what we do is – as musicians, me and my partner – is we like to make very introspective, very hypnotic music, so instead of looking outwards on what’s coming on, you can look inwards on your mind. And hopefully some of that loneliness won’t seem so scary and so daunting.

Wow. Yes, absolutely – there’s a lot of emotional connectivity that is felt, I believe, from your new music.

Do you feel that there may still be others like the two of you here in the physical realm?

You know, I do think – I do think that, and I think part of what we are trying to do is gather those people and connect them to one another through the cosmos, or from wherever they may be. I think there’s a lot more people like us than we can see visually – but I think they are out there, and I’d like to bring them together so we can all meet and join as one.

What purpose do you feel live performance serves in your ultimate goal to move beyond the physical realm?

What I like to do with all our live performances is take an idea or a concept and present it to the viewer, to the listener, and have them interpret that in their own way, and how it relates to them, and their connection to the physical realm – and how they can use that to transfer to other realms, through other dimensions.

It sounds like that also relates to a sort of purpose, maybe that you believe your art serves for the community of the living – beyond the purpose it’s serving for yourself. Would you say that’s accurate?

Okay. Do you feel any sense of direction, or something guiding you? Or do you feel like this is a totally blind quest that you’re on?

Initially it started off as a blind quest, as I was wandering, looking for purpose through music and art and comedy, whatever it may be, but I have found a guiding point right now, and I feel like one of the reasons that I was brought back to this world is to be an advocate and promote galactic travel. I think that is the single most important thing that I can do as a musician, as an artist – is to promote this space travel, to carry on this human race, because if we do not decide to leave this galaxy, eventually our handsome sun will burn out and the human race as we know it will end. So I like to do what I can and put an emphasis on the importance of intergalactic travel for the human race.

Wow. That presents a pretty strong concept of connectivity, as well as really illustrates a very large purpose that you’re serving – I think that illuminates a lot to some of the effects of what you’re doing, that are beyond what your journey is and what your goals are. That’s really interesting. How close do you feel that you are to completing your journey, or are you just not sure?

I feel I am…still years away. I don’t say there’s a – there’s no end in sight, but there is movement going forward, and I think that’s all we can ask for, you know, at the moment, is that we keep moving forward and keep striving towards this one goal. It’s hard to say that there’d ever be an end, because likely there never will be an end. Because you keep exploring, there’s gonna keep being more and there’s never gonna be an end. But as long as you’re moving forward with positivity and good energy, I think we’ll be just fine.

But are you at all concerned about how long it’s taking for you to serve your final purpose and sort of move beyond? Are you worried at all that it hasn’t happened yet?

Uh, I’m still pretty young…I’ve only been back here for a couple years, two years since 2016, and we are entering, you know, past the quarter mark of 2018, and I think I am still relatively young. I’ll probably start worrying about that in 5 or 6 years, but as of now it’s still something that I’m not too worried about.

Fantastic. That’s fantastic. I guess I just have one last question for you – you having been in the city and part of our art and music scene for the last two years, you definitely know that there is a lot of live music happening pretty much everywhere, every day.

Is there any particular reason why someone should come and see this next show?

I think it’s one of those things where, as far as music and leaving the house to go do something, you’re expecting – you’re doing it because you have some expectation of what it’s going to be. With this, there’s nothing you can really be prepared for, or what you’re going to expect – it’s gonna be something that you can’t experience anywhere else, and it is going to be something that will stick with you forever, because there will be nothing remotely close to these group of galactic men serving this purpose, on this night. It will truly be a cosmic journey.

Well, there you have it, folks. At the very least, it might be a good idea to ditch your expectations and come out to Neumos on Thursday, May 24th, and see Shit Ghost, Erik Blood, Newaxeyes, and Wall of Ears – because it could be your last concert here on Earth. Shit Ghost will release 2: Photos of Bread that day; you can pick up tickets online and check out the event page here:

Paddy Moran is an active musician and participant in the bustling Seattle music scene. When not discussing his extreme distaste for eggs (any style), Paddy can usually be found fumbling around, looking for lost personal items and accoutrements. Have you seen his backpack? It was right here a minute ago; someone must have moved it. In his personal life, Paddy requires almost constant, near-24/7 audial stimulation, which explains both his undying love for new music and why he won't just stop talking already. Oh, there's my backpack. I mean his.
Related Items2: photos of breadblack faxErik BloodFeaturegalen disstonInterviewmr spacemanNeumosnewaxeyesPaddy Moranphotos of breadPickwickshit ghostWall of Ears
← Previous Story Timber! 2018 Lineup Announcement
Next Story → Vendetta Red Record Release Show at Real Art Tacoma