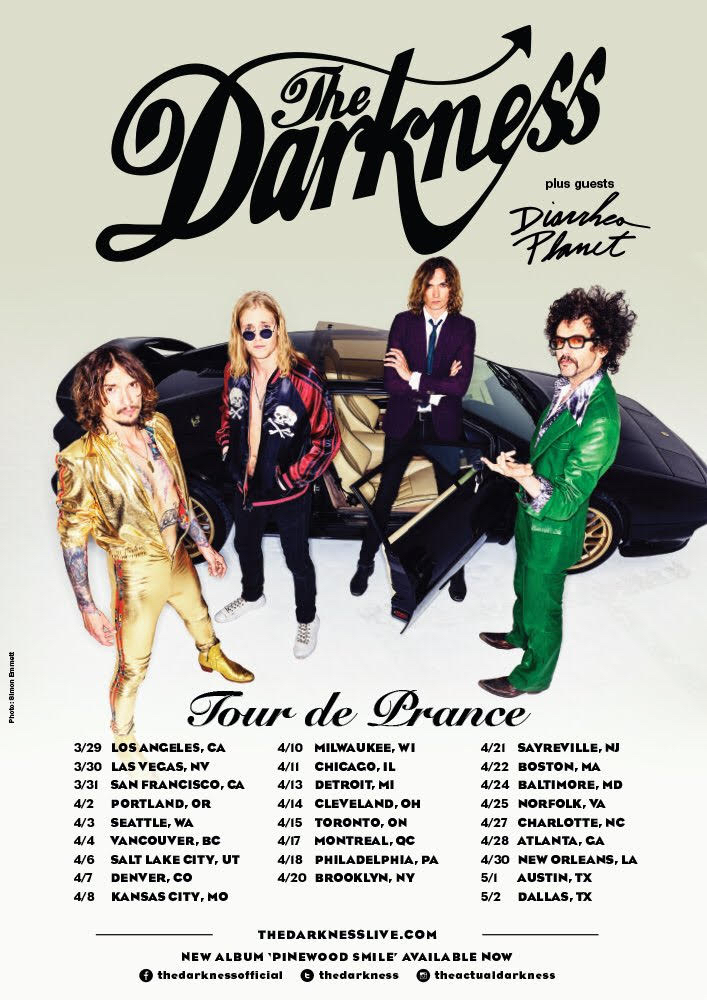 It’s been almost two decades have passed since two brothers in England decided to have spot of fun by forming a band.  They teamed up with two other English lads to become what we now know as powerhouse metal band known as The Darkness.  Their initial single “I Believe in a Thing Called Love” shot to the top of the charts. While The Darkness took a brief hiatus in 2006, and returned stronger than ever after launching a new album Hot Cakes.  Since then, The Darkness has been busy touring the world and making new music. They’ve recorded and released two more albums since their return, including 2017’s rocking Pinewood Smile. Now these legends of British metal are coming to Seattle as part of their “Tour De Prance” tour.  You can catch them blowing up The Showbox on Tuesday, April 3rd. They’re on tour with the oddly named but incredibly fun Diarrhea Planet.

Get tickets for the show on April 3rd at the Showbox at the Market at AXS.com.

Alex Crick is a Seattle based freelance photographer specializing in music photography. His interest in photography began as a school project in the early-90′s, when he also attended many live music shows. Eventually, he combined these two interests by conveying the power and excitement of live music through the eye of the camera. Over the years, he’s traveled all over the country photographing live musical acts. You can find samples of his work in SPIN, Billboard, Esquire. View his work here
Related ItemsAlex CrickConcert previewDiarrhea PlanetFeaturePreviewShowbox at the MarketThe Darkness
← Previous Story Sleepover Club’s ‘My Other Dad Is Your Ride’
Next Story → Trick Candles Debuts Twinkling New Single “241”