Full House With The Fratellis 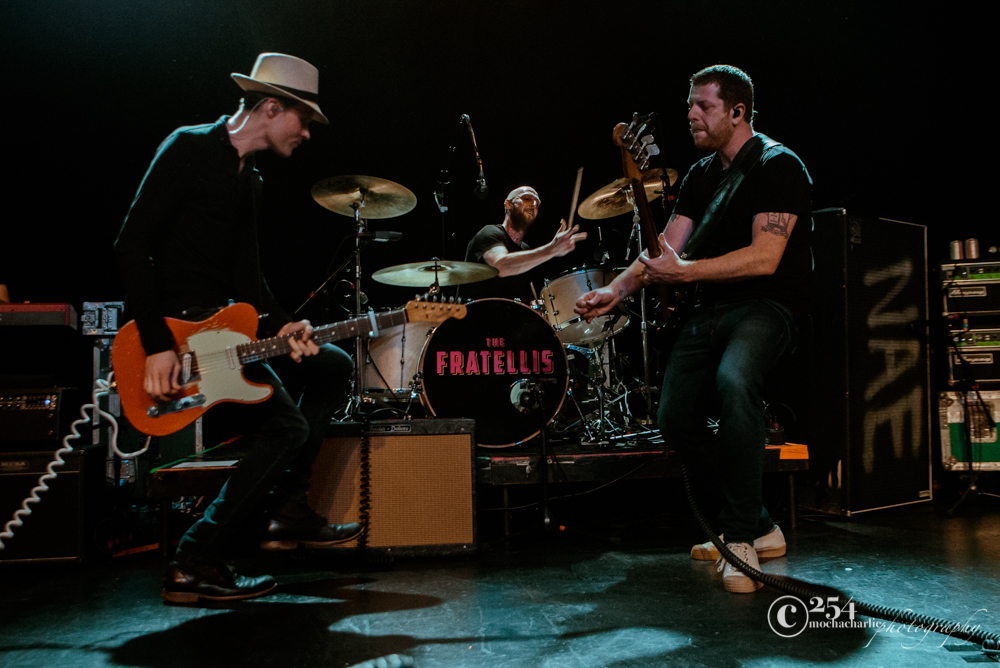 The Fratellis at The Showbox (Photo by Mocha Charlie)

Last Friday night, Scottish rock band The Fratellis, played to a sold out crowd over at Showbox Market. And before you head on over to Wikipedia, yes, their name comes from the “bad guys” from the hit movie The Goonies. They shared the stage with opener Blood Red Shoes, a two piece alternative rock band featuring lead vocalist/guitarist Laura-Mary Carter and drummer/vocalist Steven Ansell.

Fronted by lead vocalist/guitarist Jon Fratelli (John Lawler) and fleshed out by bassist Barry Fratelli (Barry Wallace) with background vocals and drums courtesy of Mince Fratelli (Gordon McRory), The Fratellis are currently on a world tour that will run select dates through the end of the year.

Formed in 2005, and after taking a few years hiatus from ’09-’12, The Fratellis have released five albums, including their latest release, In Your Own Sweet Time. They just released a video for their new single, “I’ve Been Blind,” over on their Vevo channel, which also showcases a good selection of their hits through the years. Their set Friday night included songs both old and new, which was interrupted by a blown amp just when it seemed the crowd was getting into their groove. The unexpected “intermission” gave fans an excuse to head over to the merch table, where a long line quickly formed.

Although getting their start in the early 2000’s, one could say  The Fratellis sound evokes more of an early 80’s punk feel, giving those of us who lived through the 80’s a very nostalgic look back to what was going on in small or underground clubs around the globe during that time.  You can almost imagine some of their music being a part of various iconic 80’s music soundtracks, (which I found in many older tunes as well with “Laughing Gas,” among others off their latest EP). Other tracks have uniquely different synthesizers incorporated into them, giving the band their own home within the ever-evolving alternative rock genre. Not all songs sound the same, due to the great vocal range of Jon Fratelli. Their music is fun, and relatively fast paced. Each album in their repertoire has a good variety of tunes, so if you ask which one would be “the one” to listen to, it would be hard to say. I purchased all five after the show, because I just couldn’t decide.

Mocha Charlie is an amazing photographer who has a real passion for music. She covers and shoots several shows per month in and around the region. She a brilliant photo journalist but most importantly, she is also a mother who does her best to balance out her life and live it to the fullest. Mocha Charlie uses her passion and talent to support the community, her friends and family any way that she can.
Related Itemsalternative musicbandsBlood Red ShoesDowntown SeattleFeatureMocha CharlieShowbox MarketThe Fratellis
← Previous Story Fuzz Mutt and fuzzy margs
Next Story → Unknown Mortal Orchestra at The Moore