Unknown Mortal Orchestra at The Moore

By Kriston McConnell on May 9, 2018@Kristonisms 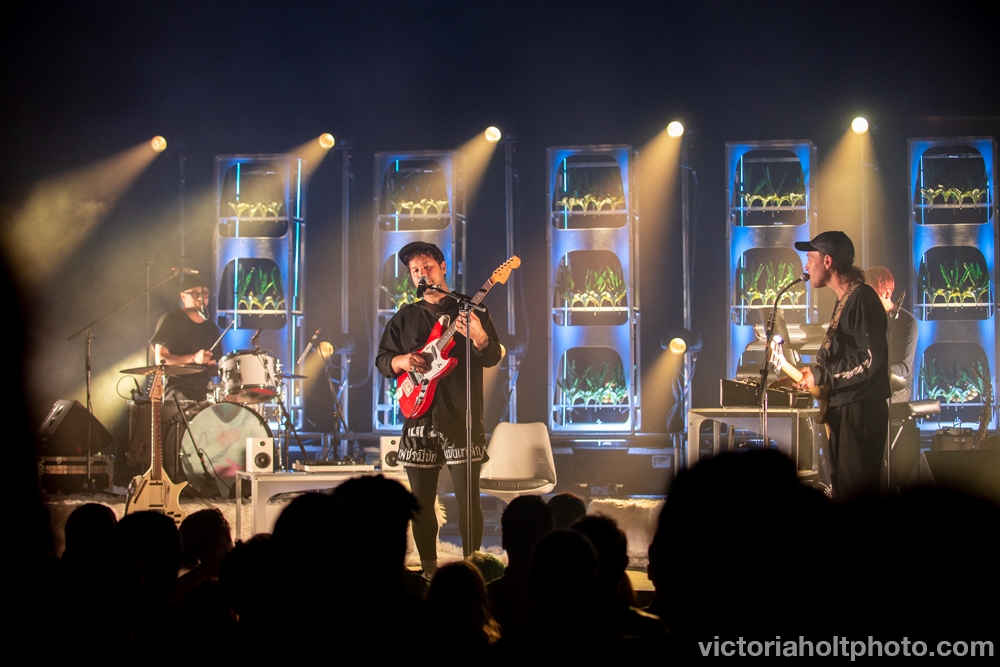 Fresh off the release of their fourth studio album, Unknown Mortal Orchestra have set out on a multi-month tour that will take them across the United States and through the heart of Europe. On Monday, May 7, the band performed at the Moore Theatre in downtown Seattle. Traditionally the theatre is used for theatrical performances, with its regal décor and cushioned seats, but instead of a set, there was a myriad of instruments.

The UK-based electronic artist Makeness opened the evening. The musician toggled between his guitar and DJ equipment as he softly sang into the microphone. His songs are dark and poppy – the perfect opener for a band such as Unknown Mortal Orchestra. The EDM style of his music didn’t quite fit in with the venue design though, as the crowd did not have room to get up and dance to his songs. Instead, a majority of the audience sat through his entire set, which the artist acknowledged was a new experience for him. Aside from this slight awkwardness, he put on a great performance with enjoyable music.

As Unknown Mortal Orchestra hit the stage, the audience quickly streamed forward to fill the smokey spaces between the seats. It’s no surprise that fans were quick to move close to the stage. On their own, these musicians are powerhouse performers, and the addition of a brilliant light setup within a slightly hazy room makes their shows even more remarkable. Throughout their set, different colored lights flashed from all over the stage, often to a disorienting degree. On more than one occasion, at the end of a particularly bright light show, the venue would go completely black, which made for an exceptionally dramatic ending to a song.

UMO began their set with a couple of older tracks to get fans excited. Just a few songs in, Ruban began an extended guitar solo and climbed down into the crowd. He ran through the audience and disappeared into the back of the venue before reappearing on the balcony. To the delight of fans, he made his way to the front of the balcony and played his guitar before slowly heading back to the stage below. Ruban appeared to be in a trance as he cranked out notes on his guitar, and watching him do so was an experience in and of itself.

The lighting came into play frequently during their set. While performing “American Guilt,” the lights behind the band frantically flashed red, white and blue. As the band performed “The Internet of Love,” they were bathed in a soft purple light, with a faint spotlight on Ruban. He would lean into the microphone, crooning the lyrics, then dip back out of the light between verses. This custom lighting created a unique experience for every song.

While The Moore Theatre isn’t an ideal place for an energetic band such as Unknown Mortal Orchestra, due to the fixed seating, it was still an excellent performance. Even with their new material, the band played plenty of older fan favorites, which had the crowd clapping and singing along the entire evening. New and old fans alike should absolutely go out of their way to see Unknown Mortal Orchestra on this tour, and any tours that come up in the future.

Kriston began her writing career as a passionate music fan. She attended dozens of shows, purchased CDs, vinyl and even cassette tapes of artists she barely even heard of. Shortly after joining a band's street team she happened to meet blogger Jacob Tender (now with Alternative Press) who asked her to write for his blog. After a couple of months he joined the staff of Under The Gun Review, and brought her along for the ride. After spending four years as a major contributor to the publication she moved on to be a web content contributor for New Noise Magazine, whose print magazines have a national reach.
Related ItemsFeatureKriston McConnellMakenessSTG PresentsThe Moore TheatreUMOUnknown Mortal OrchestraVictoria Holt
← Previous Story Full House With The Fratellis
Next Story → Showbox Hits Home Run With Papa Roach