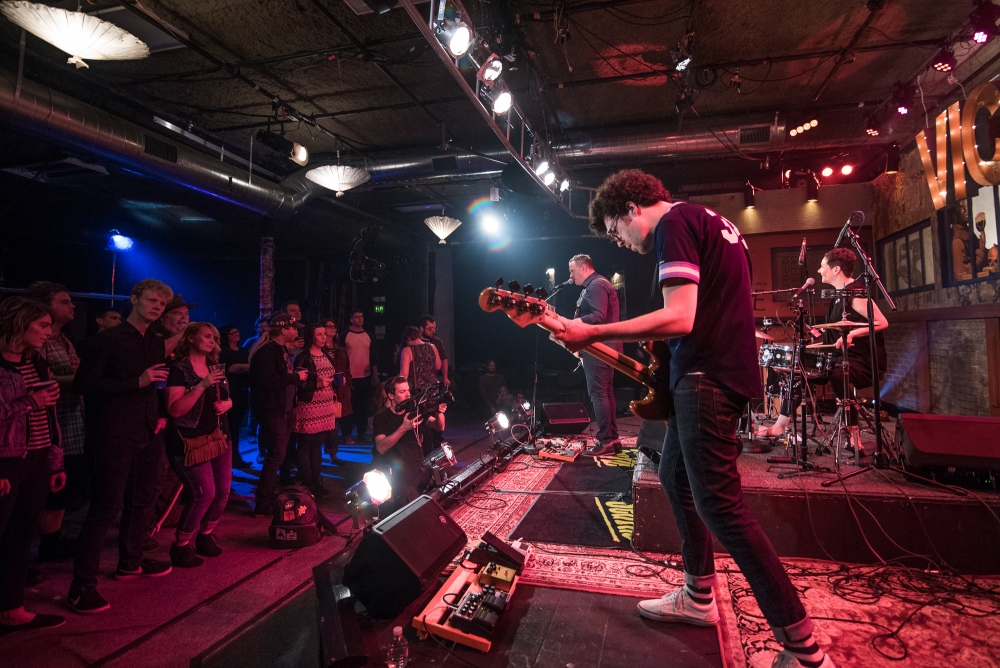 We can’t really recommend attending a Band In Seattle taping enough. The experience itself is one to remember; as is the usual case, the studio is much smaller in real life than it is on TV. Everything from the cameras on large boom arms to the copious amounts of free beer fills the room with palpable excitement. Smile folks, you’re on camera. And it’s true: you’re going to be on television, and maybe even streaming on Alaska Airlines flights.

On this particular evening, the show featured two bands that hail from Everett, and their contingent fan base made the trek south to the studio to support them. All jokes aside about the pairing of “Everett’s oldest and Everett’s youngest band,” it was a delicious bill that had Fuzz Mutt opening up for Oliver Elf Army, though each band will have their own episode. Which makes sense, because these bands can hold their own.

Fuzz Mutt was on fire. They seemed even more energized than they had been at their EP release show for COLORLESS a couple of weeks back. This extra zazz oozed out into the crowd, leading to the formation of a mosh pit, which was of recorded for posterity. The band played flawlessly and with fierceness, blistering through new tracks like “A Quiet End” and “The Doubt” while also breathing new life into some of their earliest tunes, such as the supremely catchy “3 A.M.” The band members, with Max Stephens on guitar/vox, Seann Groda on bass, and Jared Hoidal on drums, have a friendly yet reserved demeanor about them. It seems that they throw all of their intensity into their music, and we’re not complaining about that.

Oliver Elf Army is coming to steal your heart. If you haven’t seen them yet, watch their episode when it comes out. You’ll fall in love, and you’ll be surprised by it. Because Oliver Elf Army is sneaky like that. Mary and Martin Adams may not be anywhere near twentysomething, but they have more sass than musicians half their age. This comes into plain view when they play songs like “Judy Do You Ever Miss Hell” and “Booty Warrior,” take time to banter with the crowd, and share impish grins with each other. It also helps that they have Henry J. Yarsinske as their bassist, looking sporty and slinging his Jazzmaster to and fro, sliding into that low end like a beast. Martin took special time to get up on the drum riser and connect with Mary; he had professed earlier that he doesn’t get many moments away from the mic but obviously, this was a special show. They made heart eyes at each other. And slayed on TV.

You can find Band In Seattle’s recording schedule and purchase tickets here, and look for Fuzz Mutt and Oliver Elf Army’s episodes on KSTW soon.

Christine Mitchell has been poring over album liner notes pretty much since she acquired the skill of reading, and figured out the basic structure of rock songs at an early age. Whether it’s the needle popping into the first groove of the record, the beeps that signal the beginning (or end) of a cassette tape, or digital numbers ticking off the seconds from zero, music brings Christine happiness, ponderous thought, opportunities for almost scientific study, and sometimes a few tears. When she started attending live shows two decades ago, a whole new piece of the puzzle clicked in and she has been hooked ever since.
Related ItemsBand In SeattleChristine MitchellFeatureFuzz MuttOliver Elf Army
← Previous Story Showbox Hits Home Run With Papa Roach
Next Story → Late Nights at Narrative Coffee