By Christine Mitchell on August 14, 2018@Housetornado37 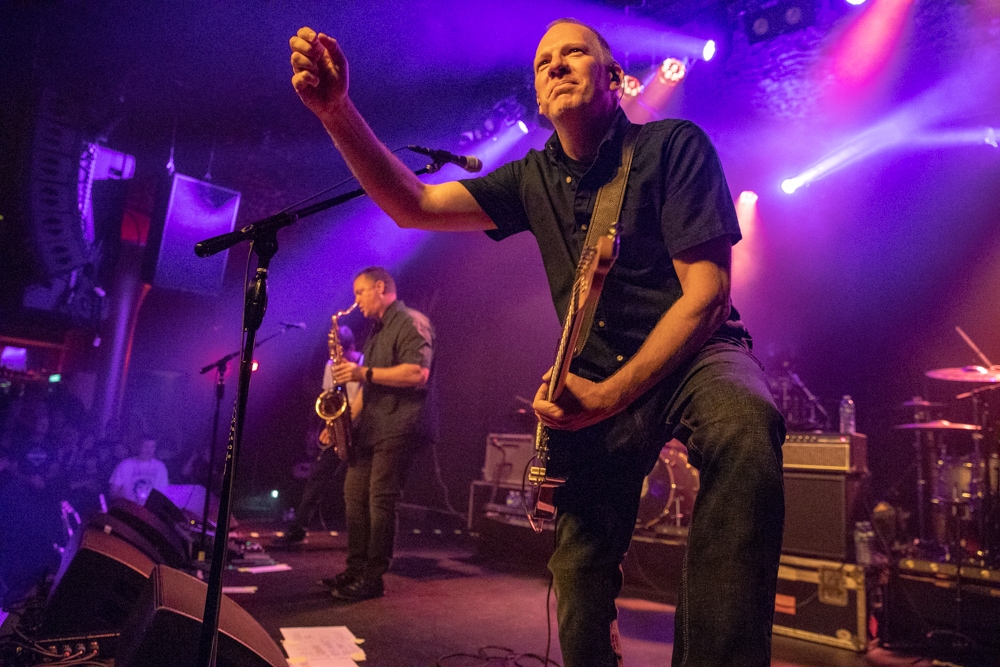 Black Happy at The Showbox (Photo by Alex Crick)

Black Happy was huge in Seattle in the early nineties, though you’ve probably never heard of them. But back in the day, if you were thumbing through The Rocket (RIP) you’d find their name in the NW Top 20 record sales alongside (and sometimes outselling) bands like Pearl Jam, Soundgarden, Alice In Chains, and Nirvana. Yet these days, if you start to talk about the band, you’re most likely to be met with a blank stare. Shut out of grunge chronicles like Hype!, among other things, Black Happy nonetheless has built a longstanding, dedicated fan base, one so devoted that their show at The Showbox last Saturday sold out less than 24 hours after tickets went on sale.

So, then, why the relative obscurity? Perhaps it was Black Happy’s particular brand of music:  the eight piece outfit included two trombones and a saxophone, along with dual drummers. This was a heady lineup in the time before the swing and/or ska revival. Besides, the band didn’t play songs in either of those genres, instead generating music that veered between punk, funk, and metal with a touch of polka here and there. Or perhaps it was the songs’ subject matter. In a time when the Seattle scene was exploding with music that detailed disillusionment, depression, and apathy, Black Happy mostly radiated positivity and spirituality. Their lyrics were pretty openly religious, though they definitely didn’t tread the same paths as other Christian bands. You were more likely to find them rocking a packed frat party than sitting in church. The first time I heard about Black Happy was from my then boyfriend, an avowed atheist. It didn’t matter. The music was too good to ignore, and the band’s two albums, Friendly Dog Salad and Peghead, have stood the test of time, so much so that they were recently pressed to vinyl for the first time via a very successful crowd funding campaign.

These re-releases were the impetus for a short run of shows to celebrate and promote the albums, the first time that Black Happy had played live since a short reunion tour in 2010. The Showbox date was the last of the four sold out shows they played, and the venue was packed to the gills. Local punks The Finger Guns led things off with a pounding set of originals along with a blowsy cover of “Tomorrow” from the musical Little Orphan Annie. Folks in their forties pogoed along. But let’s get down to business. I mean, we know why everyone was there.

Black Happy played for a solid two hours. In fact, they played two encores. And, in fact, they played until midnight, when they realized that they were past the show’s all ages curfew, or else they would have kept on playing. They played every song that they had on their setlist and then started winging it after that, ending with a cover of David Bowie’s “Suffragette City.” The crowd ate it up. It was hard to tell who was having more fun, the band members or the fans. And they sounded effing fantastic.

The night led off with the hypnotic, building “Myself,” and then Black Happy went straight for the jugular with the slamming “3-Day Weekend.” Paul Hemenway’s voice was as thick and syrupy as ever, and his smile was ten miles wide the entire night. His brother Mark seemed equally as happy back in the shadows, attacking his bass, the sound of which propelled us all through the night. The horn section appeared to be having the time of their lives, especially trombonist Jay Carkhuff, who soulfully grooved along whenever he wasn’t playing his instrument. At one point during the night, he took a tambourine to the back of the room and stood precariously on a ledge, letting loose and amusing the rest of his bandmates. The room was wild with moshing and crowd surfing, and everyone sang along to every single song. And up front in the pit, the band’s kids looked on and took videos with phones and tablets. Paul’s son was even seen flossing at one point.

Between belting out song after song after song, Hemenway regaled the crowd with the history of the band and the songs that they wrote. Before going into “Such Much Suck,” he explained the band’s hope that, in today’s world, their music and this show would inspire people to go out and spread happiness. And the song’s chorus reiterated this: “We can change things/ If we want to/ And I think it’s time we did/ Starting today.” Judging by the smiles on folks as they filed out of The Showbox, 1,100 people were fired up to do just that.

Christine Mitchell has been poring over album liner notes pretty much since she acquired the skill of reading, and figured out the basic structure of rock songs at an early age. Whether it’s the needle popping into the first groove of the record, the beeps that signal the beginning (or end) of a cassette tape, or digital numbers ticking off the seconds from zero, music brings Christine happiness, ponderous thought, opportunities for almost scientific study, and sometimes a few tears. When she started attending live shows two decades ago, a whole new piece of the puzzle clicked in and she has been hooked ever since.
Related ItemsAlex CrickBlack HappyChristine MitchellFeatureThe Finger GunsThe Showbox
← Previous Story GALLERY | Pearl Jam: The Home Shows
Next Story → #SMIontour: Pearl Jam at Fenway