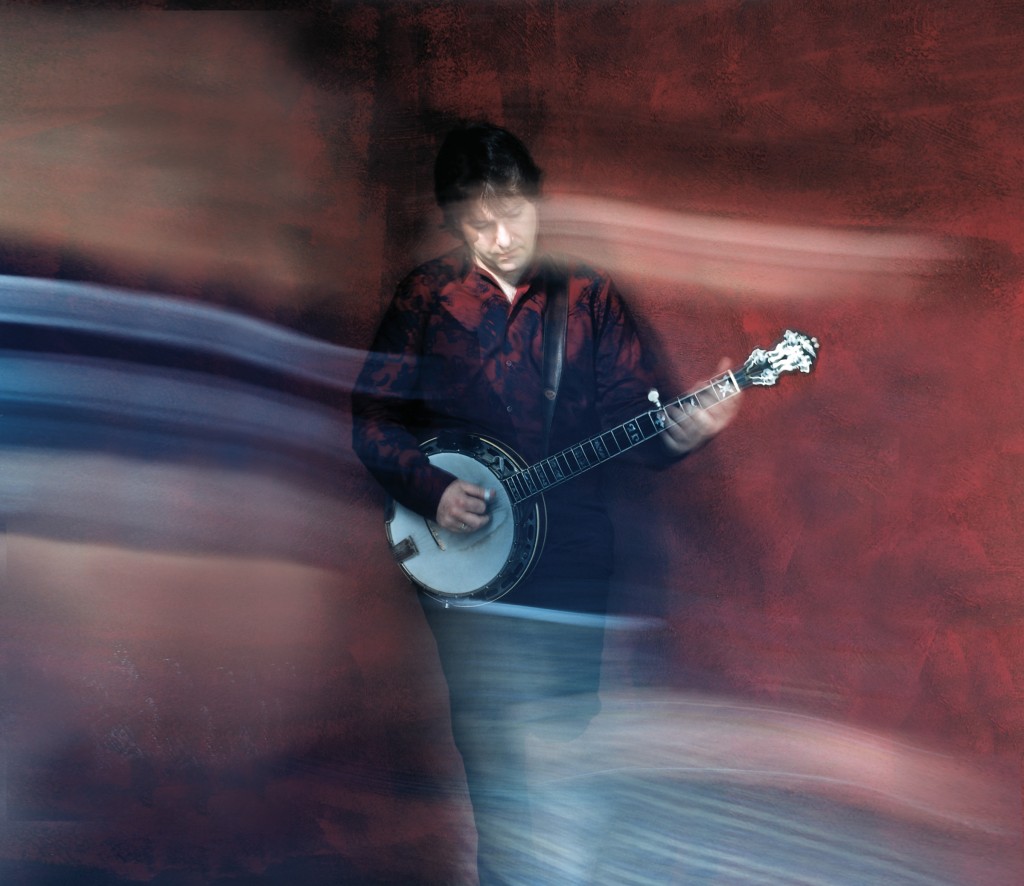 Béla Fleck is like Pablo Picasso, in that their genius and almost telekinetic rapid creation surpasses the craft itself.  Catching up with him in 2012, along with the Marcus Roberts Trio, creates a bridge in music that literally stretches Across the Imaginary Divide (Rounder) – an album title reference to what is hopefully the first of a series of collaborations.  The joy of discovery pervades the ear on this recording – a series of experiments that could be cast individually throughout various periods of music history.

It’s clear that Bela and Marcus, each among the most influential musicians of our time, approach one another with a level of mutual respect that speaks volumes about trusting sound at its origin.  The spontaneity in conception may sound modern, however, tunes like Let’s Go and That Ragtime Feeling conversely bend the ear beyond time, inspiring reflections of early jazz fragrant with Creole spirit.  Roberts’ piano may be steeped in a more traditional vein, though seldom seen with such sophistication in both rhythm and soul, introducing a freshness and complexity which evolves on the road.  Seattle will have its opportunity to savor the flavors in full beginning this Thursday 9/6, as the band kicks off a four-night series at Dimitriou’s Jazz Alley.

Béla may be best described as a seeker, whose continued adventures on the banjo and almost constant touring make him difficult to catch. I was delighted to find a break in the clouds, and to have a word with him, discussing the developments which led to the current project, touching on guitar-piano relationships, as well as being given a glimpse of a truly amazing future that even time itself may not know how to hold…

SMI:  Your contribution to the banjo as an instrument continues to grow beyond measure, as only a handful of artists in their respective fields have managed to probe such a range of genres while remaining a celebrated voice in modern music.  When reflecting on the early stages of your musical journey, through Newgrass and then what eventually led to the formation of the Flecktones, was there an intuition about how this sense of adventure could act as a compass for all that has transpired?

Fleck:  Thanks, sir! I am glad you feel that way. I always have been excited about learning new things, and also been fairly ambitious. But I never would have expected things to go as well as they have. I continue to find things that really excite me and propel growth.   And that feels pretty great.

SMI:  The genesis of the new project with Marcus Roberts Trio came about as the result of an impromptu jam. What was it like meeting for the first time, and did you expect you’d be playing together that very same day?

Fleck:  I didn’t expect to play with him, just pay my respects. He was sweeter than I expected, for some reason – and surprisingly open-minded and well informed about music I didn’t at all expect him to know about.

SMI:  Having known and respected Marcus as an accomplished master of piano, what quality would you say became most immediately apparent in the chemistry between you?

Fleck:  What a fantastic listener he is, and what a great team player he is became very evident very fast. And we did have immediate chemistry, and it has just gone up from there.

SMI:  Did these early encounters through both playing and becoming acquainted influence what material would be considered for the album Across the Imaginary Divide?

Fleck:  I think we knew that we wanted to do a lot more than jam, as we did on the first day. The next time we played together, we learned each others’ tunes, and I wrote a couple of new ones. After playing one actual ‘gig’, we both had a better idea of what the album might include.

SMI:  The guitar-piano relationship in jazz can be a bit elusive when considering the role of both accompanist and soloist, and seems to succeed when both players can share empathy in the way textures, harmony, and dynamics are employed. Have prior collaborations with pianists such as Chick Corea helped to inform the direction you’ve taken with Marcus?

Fleck:  Well, Chick told me to just play and don’t be hung up or worried about stepping on him harmonically, and Marcus has given me the same freedom. With both pianists, the idea of soloing simultaneously came up quick and became a strong part of our interaction. But the language is quite different between these two piano gods.

SMI:  The range of material on Across the Imaginary Divide provide an exciting canvas for exploration, however, the arrangements themselves really shine in a way that amplifies the spirit and camaraderie shared by the two of you. Can you describe how you were able to go through the process of sculpting these songs as a band while still managing to retain that spontaneity and playfulness inside your musical dialogue?

Fleck:  We both have an intense work ethic, and we like to work fast. So we were able to develop these arrangements in a day or two, and get down to the business of recording them. Arrangements sessions featured a lot of us finishing each other’s sentences, and knowing what each idea implied for the rest of the song, instantly.

SMI:  This inaugural project presents a compelling case for new directions in music. Is there a particular song from the album that suggests a potential next stop on the road, or perhaps a song that emerged unexpectedly and that alludes to another framework within which the group could operate?

Fleck:  I love the whole album, and the differences and diversity of the project. Rather than fix on one, I’d rather consider the whole. There are a lot of trails set out upon on this recording – and the live shows are bringing the fruit to an even riper point.

SMI:  If you were to choose one quality about Marcus that stands apart from all others, as it pertains to all you’ve experienced and learned as a result of working together, what would that be?

Fleck:  His playing sounds inevitable and right, which is an amazing musical achievement. In fact that is what I strive for myself, in playing and composing.

SMI:  The rhythm section of Rodney Jones and Jason Marsalis are certainly counterparts to Roberts’ formula for expression in the context of trio. What was it like working with them after having already had your first taste of jamming with Marcus?

Fleck:  These guys are fantastic, and played a huge part in the arranging and creating of this music. Marcus and I are leaders among equals. And the roles are so clearly defined in this group, that ego doesn’t enter in.

SMI:  What glimpse can you give us of new musical adventures that currently reside on your horizon?

Fleck:  I have about 10 ‘live’ projects going right now, which is too much. A big one is a new piece I’m composing for banjo and string quartet, which is a companion piece to my banjo concerto that premiered last year. I’ll be collaborating with Brooklyn Rider, a fantastic quartet from Brooklyn, of all places! I’ll be performing with them, and with several orchestras, over the next few years. Also I’ve recently finished a duo concert with Chris Thile, which we’d like to do more of, a ‘hardcore trad bluegrass’ show, some solo concerts, touring with Malian superstar Ouomou Sangare, and more…

In support of their new release, Across the Imaginary Divide (Rounder), Béla Fleck will be appearing with the Marcus Roberts Trio at Dimitriou’s Jazz Alley on Thursday, September 6th through Sunday, September 9th.  Tickets are available directly through the website at http://www.jazzalley.com/reservations_1.asp?showid=1120. 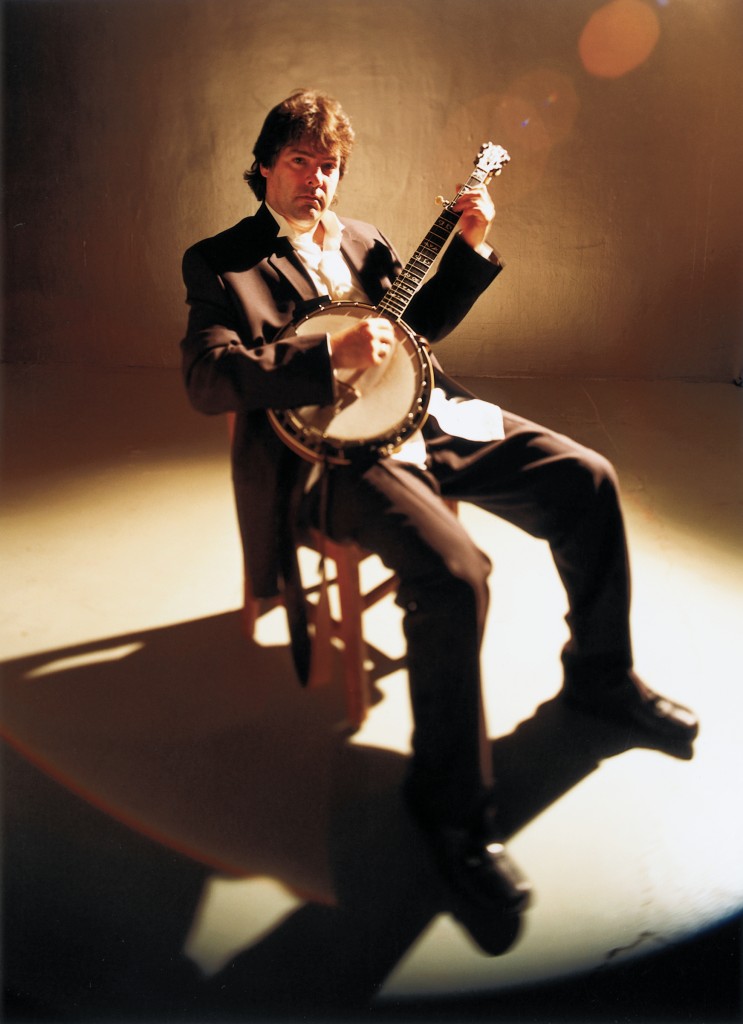 Not only is he a multi-media journalist, he is also an accomplished musician. He is the founder of SMI and drives the creative look, feel and branding for the publication. His years of writing, arranging, and performing live music in a variety of genres inform his ability to communicate the message and the mechanics of music. Roth’s work on SMI reflects his philosophy that music is the universal language, and builds community. He believes it has the power to unite people of every race, religion, gender, and persuasion.
Related ItemsBela FleckDimitrious Jazz AlleyJonathan SindelmanSeattle Music Happenings
← Previous Story Bumbershoot 2012: a Sunday smorgasbord of musical delights
Next Story → Bumbershoot 2012: Reignwolf rules day three