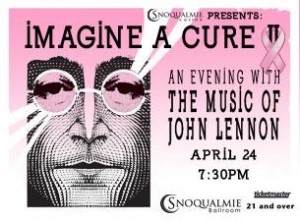 Seattlemusicinsider.com is now officially launched.  There will be several links that we will be adding as well as great coverage of featured musical artists. In addition “SMI Radio” is now on the air. The show will feature music and interviews from some great local artists. We appreciate your patience as we get the website up and running. The website is a continued work in progress so keep checking back as construction develops. In the meantime thank you for your support.

Imagine a Cure II: The Who’s Roger Daltry and Natashia Bedingfield to perform locally for charity

Mark the date — April 24, 7:30 pm.  That’s when the Puget Sound area will be rocked again with a world-class, all-star benefit concert — Imagine A Cure II. The show, honoring the music and memory of John Lennon, takes place at the Snoqualmie Casino and benefits the Puget Sound Affiliate. of Susan G. Komen for the Cure.

To read the rest go here.

Not only is he a multi-media journalist, he is also an accomplished musician. He is the founder of SMI and drives the creative look, feel and branding for the publication. His years of writing, arranging, and performing live music in a variety of genres inform his ability to communicate the message and the mechanics of music. Roth’s work on SMI reflects his philosophy that music is the universal language, and builds community. He believes it has the power to unite people of every race, religion, gender, and persuasion.
Related ItemsAlan WhiteExaminer.comImagine a CureJohn LennonSeattle Music ExaminerSMISusan G. Koman for the Cure
Next Story → One Reel offers less expensive ‘economy size’ version of Bumbershoot