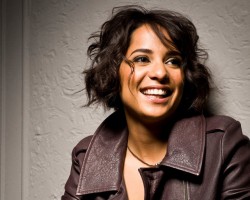 One of TV’s hottest new shows, “The Voice” on NBC, is garnering national attention for northwest singer/ songwriter Vicci Martinez. You can watch her compete for the top spot live on Tuesday, June 7th.  But before heading off to Los Angeles, Vicci performed a sold-out show at  Jazz Bones in Tacoma, Washington.

SMI Radio’s Greg Roth caught up with Vicci before she went on. In this week’s show, they talk about “The Voice,” her music, and her inspirations – and sample selected cuts from her  “Live From Jazzbones” CD.

Not only is he a multi-media journalist, he is also an accomplished musician. He is the founder of SMI and drives the creative look, feel and branding for the publication. His years of writing, arranging, and performing live music in a variety of genres inform his ability to communicate the message and the mechanics of music. Roth’s work on SMI reflects his philosophy that music is the universal language, and builds community. He believes it has the power to unite people of every race, religion, gender, and persuasion.
Related ItemsJazzbonesRockRoots RockSeattle Music InsiderSMI RadioThe VoiceVicci Martinez
← Previous Story SMI and NWCZ Radio join forces
Next Story → SMI Radio Ep. 23 On Demand: Michael “Fitz” Fitzpatrick, John Popper, Perry Acker