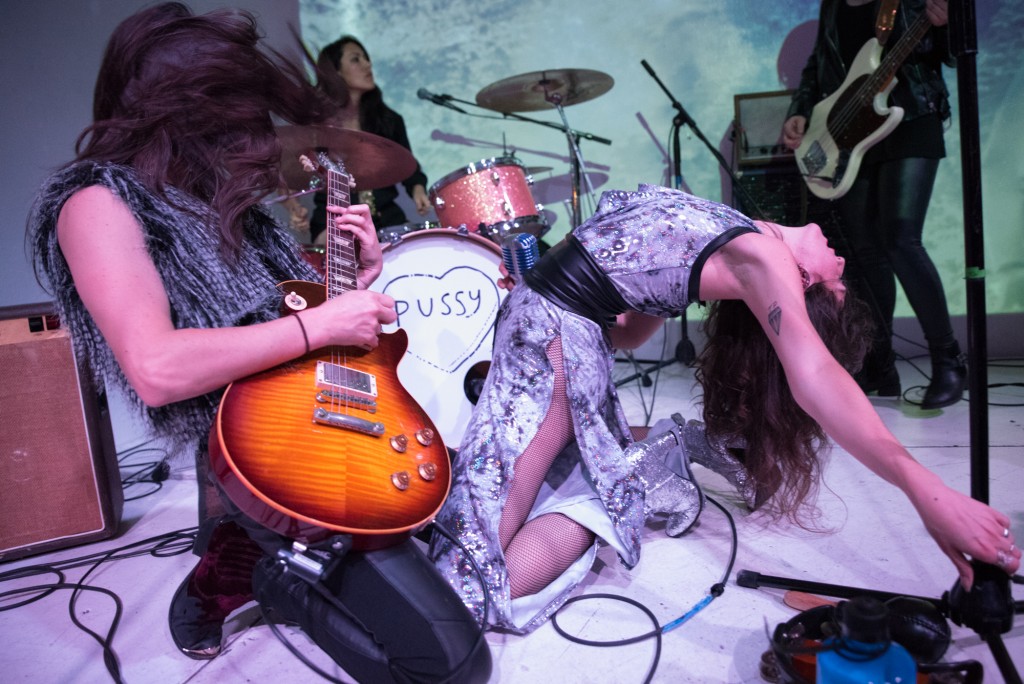 What follows is a friendly conversation between SMI founder Greg Roth and Content Coordinator Christine Mitchell about their shared experience at Thunderpussy’s party at Fred Wildlife Refuge for the premiere of their first music video, “Welcome to the Disco.”

Greg: So, this is a band that I have wanted to see for a long time, for many reasons. First of all, they are a Seattle supergroup consisting of members from some brilliant Seattle bands – Whitney Petty, former drummer for The Grizzled Mighty on guitar, Leah Julius from Cumulus on bass, Lena Simon, who plays guitar for La Luz on drums, and fronted by the talented, highly charismatic, and provocative Molly Sides, whose strong theatrical, musical and dance acumen were on full display throughout her performance last Saturday night.

All of this makes a great recipe for a supersonic and highly visual live performance. The buzz around these ladies has been off the hook. After reading your write ups here on SMI and seeing your stunning photos, capturing some electric moments of some of their recent live performances around town, my appetite was whetted to see TP do their thing in person. The video release party for their newest single “Welcome to the Disco” seemed like the perfect opportunity to see what this band is all about in a live setting, and I am here to tell ya that they exceeded my already high expectations!

Christine: I’ve been a foaming-at-the-mouth Thunderpussy fan since I saw them open up for My Goodness at The Cannery last September. From a photography standpoint (or an audience standpoint, for that matter), Thunderpussy’s live show is an absolute visual feast! Sides’ contortions smacked up against Petty’s cock-rock attitudes make for a heady, sexy mix that at times involves whips and gingerly placed electrical tape. In print it may sound a bit gratuitous, but, like so many Seattle bands of yore (Gas Huffer, Supersuckers, and Sky Cries Mary to name a few), Thunderpussy backs up their performance with solid rock music. I could go on about all of the members of this group and how well they play, but you don’t call a supergroup a supergroup for nothing. Their pedigree speaks volumes, and their seventies-tinged, danceable, fuzzed-out and driving tunes quickly dismiss the notion that these gals are just goofing off. They’re definitely not.

Greg: Concur! I think the real genius  behind this project is that the band produces a very powerful visual image in their branding and live performance. They are a solid live act. That said, underneath the bombastic sound and the chaotic and hyper kinetic performance are some solid musical chops.

Sides is one of the best front people that I have ever witnessed in the local music scene. It is hard to take your eyes off of her. She commands the stage and works the crowd like a seasoned pro. Her sexy and sassy attitude draw you in but what keeps your attention is the fact that she has real strong vocal prowess and range. I have seen a lot of front persons who know how to work a crowd but lack the technical ability. It is obvious that she has voice and dance training, yet her performance is not too slick or cheesy. Great artists create in the moment, in the physical space that they are in – Sides is a true artist. Another thing that endears her to me is the fact that her tongue is firmly planted in cheek. Molly brings a strong element of fun and mischief to her act which makes her more likable and accessible to the audience.

The band is tight. Leah Julius and Lena Simon are totally locked in and provide a strong rhythm foundation. The members all compliment and play off each other very well. Of course, I can’t say enough about Whitney Petty. I have watched her up close while she was drumming with The Grizzled Mighty, and so it was a lot of fun to see her in a totally different light – untethered, rockin’ her ax on stage, delivering 70’s styled power cords and guitar licks like a woman on fire. She is a real rock star in the classic sense!

A band like this is a rocktographers dream. Am I right or wrong?

Christine: (Checks external hard drive) . . . yes. Ha! As Sides orients herself, I’m having a field day composing and snapping away. Every time I photograph a Thunderpussy show I walk away sore, because I move with the band and get into really weird positions. They are very physical, and I feel it through the lens (and later the next morning). It’s a really good kind of sore, though.

I’m interested to hear what you thought of the video.

Greg: Yes, about the video . . . I thought it was Funkin’ brilliant! To me, a great video is like a great meal. It has to start with strong ingredients. The key ingredients here are the band itself. They are highly visual so that is a great start. The second main ingredient is the song. Without a great tune, the video could fall flat. I have seen videos with great visuals but because of a weak song, I was left cold. In this case, the video is strong because of the energy and attitude of the song itself driving the video forward. The foundation of the song possesses a solid tribal, “Bo Didleyesque” beat. The number is highly energetic, so all of the edits, transitions and subject matter of the video work well for me as a really strong marketing tool for the band, as well as a great piece of performance art. I love the retro-glam feel of the video, starting off with Molly and Whitney traversing through the dark streets of Seattle wearing vintage, metal flake motorcycle helmets.

Video producer and director Cheryl Ediss and Sam Kelly take the viewer into a kind of sleazy, glamorous, dark and magical world reminiscent of  Soho or Greenwich Village, New York circa 1976 / 77. I like the use of the hand-held camera as the viewer is taken inside the club where the band and denizens converge leading up to some eye catching choreography, showcasing Molly’s dance skills and the band’s live visual performance.

Christine: I’m a big fan of that continuous shot! I can’t imagine the amount of work that went into setting that up. I also love the little eggs that seem to transform their finders into the band members. I especially love where Whitney finds hers. I think she also likes licking people. The dancing for me is a no-brainer. Molly in a dance-off smackdown? YES!!! And then to realize that it was filmed right at Fred Wildlife Refuge, right where we were standing? Mind. Blown.

Greg: Indeed. I think it is brilliant that we were able to watch the video projected on the wall of the venue where some of the interior shots were filmed. The funny thing is, I didn’t consciously realize that we were standing in the actual venue until the end! It was a really great use of the space, which was the perfect location for the video shoot and viewing party. It is obvious, that a lot of long hours and work went into the video and release party.

Christine: Of course, the next stop for this band is SASQUATCH! I wonder how many bands find themselves playing THAT festival just a year after their first gig. And rumor has it that their debut album will be out sometime in the fall. One can only hope. Not a day goes by where I don’t hurt because I can’t blast Thunderpussy in my car yet.

Greg: Thunderpussy is definitely some good car blasting music with the windows rolled down! In the meantime, I will definitely have to get the ladies in the studio for an interview and in studio performance for (Shameless Plug Alert!) SMI Radio. Perhaps that will suffice until the new record drops. Great hanging with you Christine, catch you at the next picnic!

On behalf of SMI, thank you Thunderpussy for showing us a great time this past Saturday and inviting us to your rockin’ soiree!

Thunderpussy fans, you have read about what we think about the new video. Please tell us what YOU think! (We thinks ya gonna dig it!) 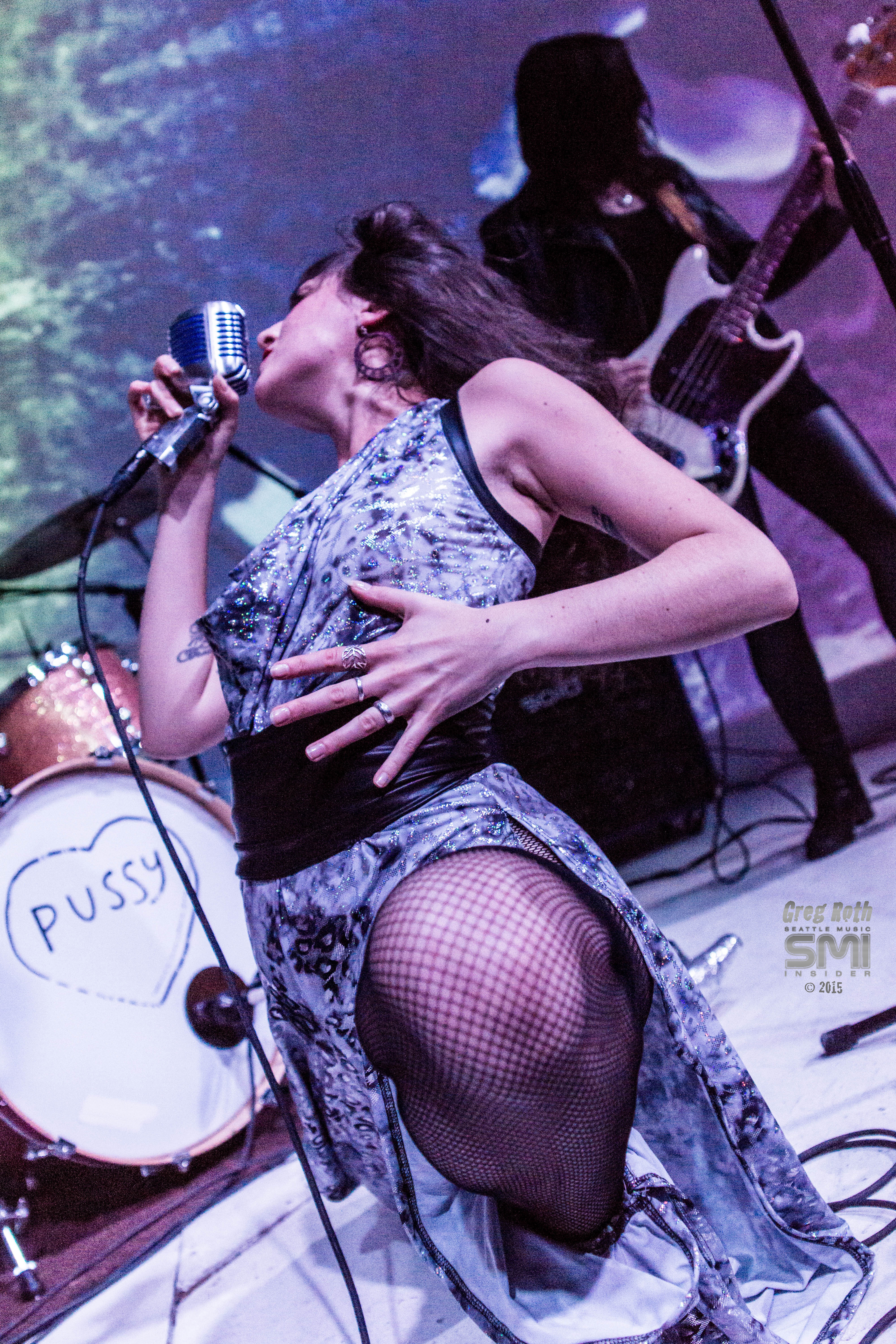 Not only is he a multi-media journalist, he is also an accomplished musician. He is the founder of SMI and drives the creative look, feel and branding for the publication. His years of writing, arranging, and performing live music in a variety of genres inform his ability to communicate the message and the mechanics of music. Roth’s work on SMI reflects his philosophy that music is the universal language, and builds community. He believes it has the power to unite people of every race, religion, gender, and persuasion.
Related ItemsbodChristine MitchellFred Wildlife RefugeGreg RothLeah JuliusLena SimonLocalMolly SidesNewsSeattle Music HappeningsThunderpussyWhitney Petty
← Previous Story Kaiser Chiefs at The Showbox: signs and songs
Next Story → SMI New Music Tuesday Preview: Yonder “Harborview”