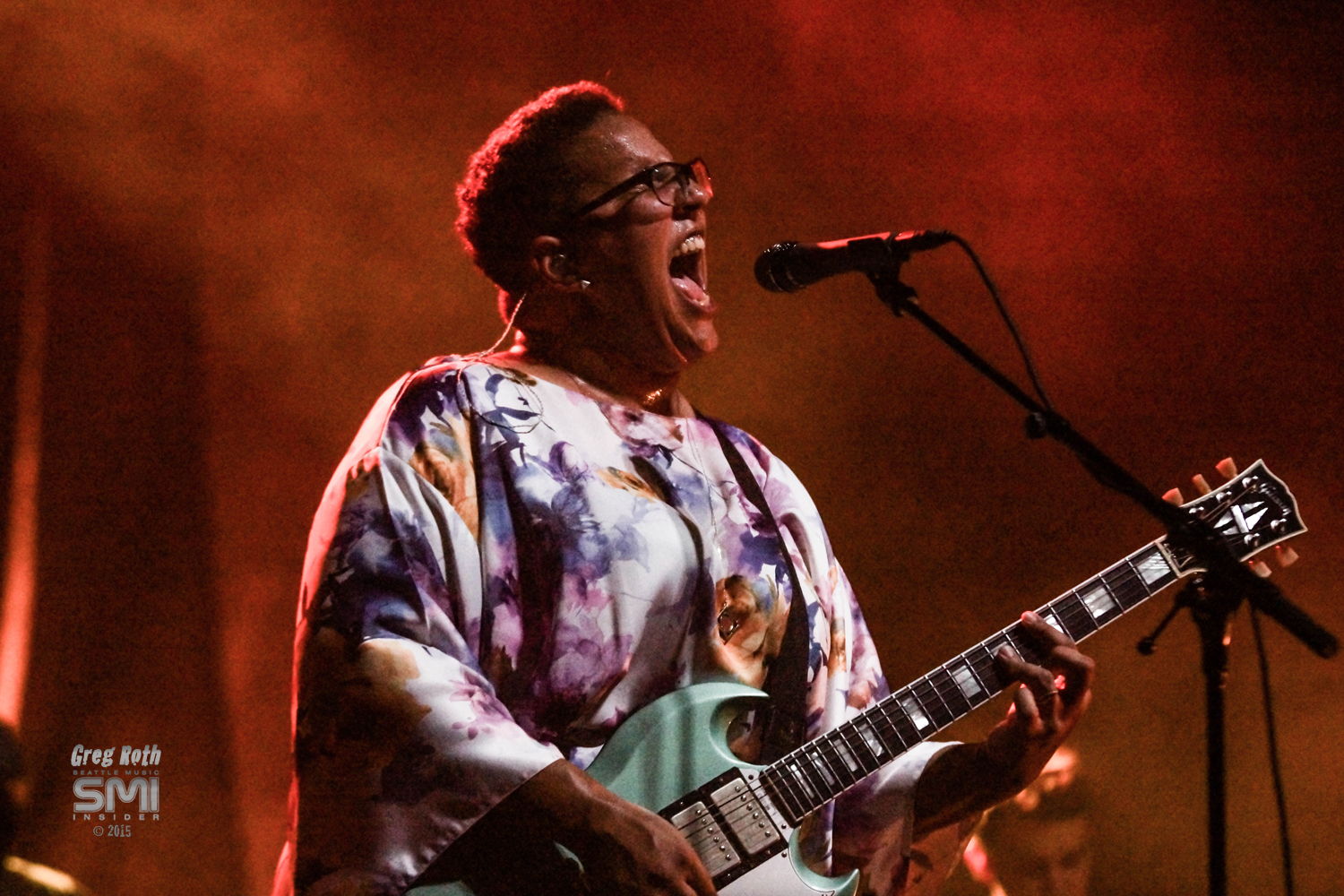 Clouds filled the sky and rain and wind were threatening, but the potential for summer rain couldn’t keep the throngs of music lovers from streaming into Redmond’s Marymoor Park for what turned out to be one of the highest anticipated shows of the year.

Alabama Shakes is touring in support of their sonically brilliant and highly anticipated sophomore effort, Sound & Color. The roots rock, blues and soul outfit came strong out of the gate with their solid debut record, Boys and Girls. After several years of barnstorming around the globe, the band is even tighter, and brings a greater level of maturity and sophistication to their music and live performances.

The clouds cleared and threat of rain subsided and Alabama Shakes proceeded to take the Marymoor crowd to church with their authentic brand of American blues based rock & soul. What made the show even more special was the fact that it was streamed live via Melodic Caring Project to children across the USA, who are unable to attend live music events because they are battling serious illness. Alabama Shakes lead vocalist, Brittany Howard delivered a flawless, enlightening and heartfelt performance to those in attendance, and to the Melodic Caring Project “Rockstars” watching live in hospital beds and at home. Howard gave a heartfelt dedication to each child prior to launching into each number. She truly made the evening about the kids, as if each note, chord and vocal styling was delivered just for them. With each shout out Howard gave to the kids, the audience responded in kind, often shouting out their names in solidarity.

Did the band play with a little more zeal because they knew that the show was streamed across the world and targeted at a special audience? It is hard to say. It sure seemed like it, but the fact is that Alabama Shakes played the only way they know how – tight, powerful, soulful and in the pocket. We have seen the band perform live before, and it seems to us that the band brought a little something extra special knowing they were performing in front of a special audience.

Howard brought the audience to their feet, channeling Sam Cooke, Otis Redding, Janis Joplin and Aretha Franklin with her own patented soulful style. They featured rousing renditions of songs from their two most recent releases. Based on comments on the MCP social stream, it was pretty clear that kids and people all around the world were mesmerized and inspired by the band’s brilliant Northwest performance.

The event was sponsored by Ace Cafe USA and Arnold Palmer Hospital for Children. The Los Angeles based band Chicano Batman opened the evening and wowed the audience with a high-energy and virtuosic set.

We had the opportunity to catch up with MCP co-founder, Levi Ware to share his thoughts on the special evening.

SMI: You have done literally hundreds of shows since you and your wife and MCP co-founder started this venture. All of the shows are special but this one has a little extra magic. What was it that made this show a little more magical?

Levi Ware: Let me start by saying thank you! SMI has been a fantastic partner to MCP and you and Jason Tang have been crucial members of the Melodic Caring Project team.

Over the last few years, since launching MCP, we’ve seen one factor that really differentiates shows, that is the intent of the artist. Brittany Howard fully realizes that her music, and a message of love, has the power to create positive change. Her dedications to the kids were sincere and heart felt and that intention inspired the entire crowd. Five thousand inspired souls is a powerful force and you could feel that positive energy at Marymoor Park last Saturday.

SMI: I have seen Alabama Shakes perform before. They always sound brilliant live. It seemed to me that they played with a lot more intensity and intention than from when I have seen them before. I would think that knowing that they were performing for some special kids they brought it even harder. Which is saying a lot! Do you agree?

Levi Ware: Absolutely. They were really excited to play for the kids! Alabama Shakes is a world-class band that puts on an incredible, high-energy show. But if you think about it, they play hundreds of shows every year to entertain crowds. I think this show was special for them because it was much more than entertainment. We repeatedly hear from artists that “playing for kids, who are watching from their hospital rooms, gives our music and performance more purpose.”  Over the last few years we’ve seen that purpose inspire artists to play their very best.

SMI: When you spoke to the band backstage, what was their feeling regarding this show and knowing that it was going out live to not only the Rock stars but to a global audience?

Levi Ware: When we talked to them backstage they were excited to play for the kids. I think, at this point, the band is pretty accustomed to playing to a global audience but playing a show for kids that really need the encouragement and love was something new and inspiring. It meant a lot to them and they gave it their all. Brittany did a beautiful job of reaching out to the kids and making each and every one of them feel like true rockSTARS.

SMI: Having a band like Alabama Shakes performing for the Rockstars and MCP is quite a win / win. How did this show come about?

Levi Ware: It is! We were honored and thrilled to team up with such a world-class band. We are very intentional about our curation and the artists we stream to the kids. This is a band I was excited to work with so I reached out to the Shakes management about partnering for their Marymoor show. The response was very positive from the start. After working with them it’s obvious that they are just as intentional about their music and the team they have assembled around the band. They were incredibly pleasant to work with, very kind and accommodating and from management to lighting to lead singer they were all really excited to send love to the kids.

SMI: You mentioned that the band might be interested in working with you again, that is terrific. It seems that they were a natural fit for MCP.

Levi Ware: Yes! I think the experience really meant a lot to them. The sentiment is something we’ve heard many times from artists: “We’ve played a lot of shows but this has been the most meaningful show of the entire tour.” I think artists are naturally passionate and compassionate people. Getting involved in a cause that empowers their music to be so much more than entertainment, really speaks to them.

SMI: In your own words, describe the evening and what it meant to you:

Levi Ware: Putting it into words is as hard now as it was the night of the show. It’s really difficult to describe the energy of an evening like last Saturday. Seeing the artists so invested in reaching out to the kids and sending them love and encouragement is a very powerful thing. Watching the crowd respond to that genuine love as they offer their energy to cheer for, not only the band but also the kids, makes the energy exponential. It becomes a very reciprocal relationship between the artist and the audience as they join together to send love to these kids (and families) that so desperately need it. That shared intention affects the entire performance and energizes the whole venue. It becomes a different kind of show, a purposeful show.

For me it has a special significance. I know, in my conversations with you, Greg, that you feel the same way: In a time when we, as people, are being divided and isolated by so many factors (politics, beliefs, fear, technology, social media… etc.) it has never been more important to come together as a community and focus on the things we have in common rather than the things that divide us. Regardless of our beliefs, views and stances we must learn to allow compassion and empathy to overcome our differences and inspire goodwill towards each other. On Saturday there were 5,000 people at Marymoor Park with completely varying views and beliefs but they were all joined together in sending love to the kids. That’s beautiful!

One amazing lesson we’ve learned from these courageous kids (and their families) is the importance of relationships. When tragedy has stripped all of the trivial things from your life, relationships are all that matters. I’m extremely grateful to these amazing families for sharing the wisdom they’ve gained through their trials and for reminding us that the most important thing we have is each other.

For a brief recap of the evening’s highlights and shout-outs to “The Rockstars” click on the video below courtesy of Melodic Caring Project….

Click on a photo to see the complete photo slideshow…

Not only is he a multi-media journalist, he is also an accomplished musician. He is the founder of SMI and drives the creative look, feel and branding for the publication. His years of writing, arranging, and performing live music in a variety of genres inform his ability to communicate the message and the mechanics of music. Roth’s work on SMI reflects his philosophy that music is the universal language, and builds community. He believes it has the power to unite people of every race, religion, gender, and persuasion.
Related ItemsAce Cafe USAAlabama ShakesArnold Palmer Hospital for ChildrenBrittany HowardFeatureGreg RothJason TangLevi WareMelodic Caring ProjectPeter BowersStephanie WareSteve Glum
← Previous Story Life In Pictures: Thunderpussy
Next Story → The Hot Seat: Savanna Räy Dohner