By Christine Mitchell on March 26, 2017@Housetornado37 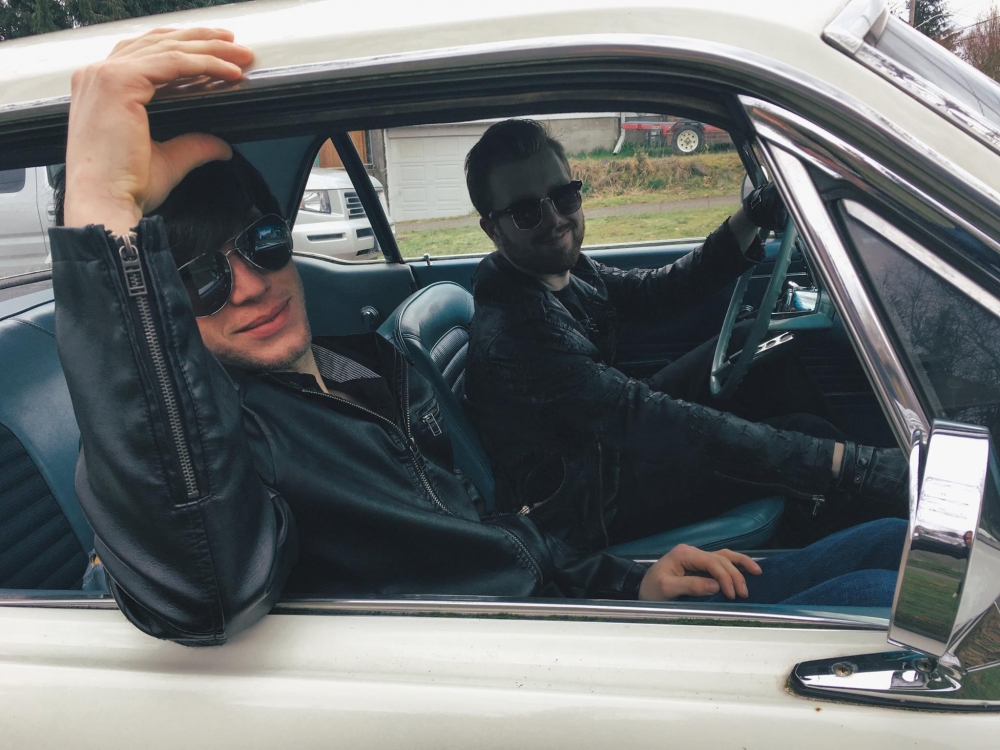 Shookup has been playing the long game for the past couple of years. The heavy rocking band released several songs on their Bandcamp page two years ago and has played a smattering of shows around town. SMI caught their first official show at The Anchor Pub during Fisherman’s Village Music Festival last year and dug their growling, low end swagger.

Shookup is ready to take on the world in 2017, and they’re starting things off right with a video for their newest track, “Drive,” directed by Erik Johnson. The video follows vocalist/guitarist Matt Grosvold and bassist Blake Lewis as they take a sweet classic Mustang (courtesy of Amber Murray) on a joyride all around town. Lewis describes the plot thusly:

“What happens when two nihilists with hearts of gold steal a car and take it for a joyride around Seattle?
Who can say? I don’t think these boys even know. They just believe in Rock and Roll. But yet, in the face of absolute nothingness, the desire to preach the good word and return what is owed perhaps wins in a small way.
Don’t overthink it.”

The video is a visual showcase of Seattle; the pair hit up all of the hotspots: they start off in Ballard as they breeze past The Tractor Tavern, then hit the Space Needle, and Capitol Hill with its rainbow-drenched intersections. There is a humorous nod to the absence of their drummer, Kevin Past. And they must truly be nihilists, because who can stomach La Carta de Oaxaca AND Dick’s in one day? Grosvold and Lewis are clad in black leather (Lewis sporting his love for Maszer on his tshirt), and they drink from a paper bag and smoke their smokes. They kindly return their ride where they found it, though, proving that hey, they ain’t so bad.

“Drive” has a snotty growl to it, a devil may care attitude that accompanies the video’s story quite well. The chorus itself is a nihilistic chant: “We want it all, we want it now.” Grosvold’s vocals are low, warm, and dark, the guitar scuzzed out with overlays of slide and clear notes. Lewis’ dropped C bass replicates the sound of the Mustang they drive in the video, full of octane and horsepower. And though Past may be missing visually, aurally his presence is unmistakable and vital. The drums in “Drive” hit hard in all of the right places.

Enjoy a first look at “Drive” below. Shookup plays The Sunset Tavern on April 27th, opening for Honor Hall and Trash Dogs. You can pick your tickets up here: Tickets. It promises to be a grungy, sludgy good time.

Christine Mitchell has been poring over album liner notes pretty much since she acquired the skill of reading, and figured out the basic structure of rock songs at an early age. Whether it’s the needle popping into the first groove of the record, the beeps that signal the beginning (or end) of a cassette tape, or digital numbers ticking off the seconds from zero, music brings Christine happiness, ponderous thought, opportunities for almost scientific study, and sometimes a few tears. When she started attending live shows two decades ago, a whole new piece of the puzzle clicked in and she has been hooked ever since.
Related ItemsChristine MitchellFeatureShookup
← Previous Story Seattle’s Newest Music Venue? Welcome to Métier
Next Story → Interview: Jeremy Depoyster of The Devil Wears Prada