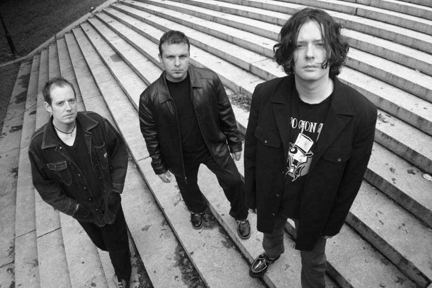 Enjoying Extras/B-side/Rarities albums as much, or even more, than a band’s studio efforts is a phenomenon that I have yet to understand. After all, who’s never shouted at the stereo, “Why didn’t you put this song on the record!?”

a B-sides album for the past few years on the band’s website message board. And with the band gearing up for a US tour with fellow 90’s alt rock groups Everclear, Gin Blossoms, Lit, and Sugar Ray, now is a perfect time.

What sets Marcy Playground apart from their contemporaries is a level of songwriting that transcends the decade-specific sound. Sure, their 1997 hit “Sex and Candy” will go down as one of the songs that defined the late 90’s, but that album (Marcy Playground) had some magnificent gems that have stood the test of time for those who bothered to dig deeper.

[Their following 3 studio albums, Shapeshifter (1999), MP3 (2003) and Leaving Wonderland…In a fit of rage (2009), demonstrated MP’s ability to keep fans engaged, as well as grow musically to stay relevant. Unfortunately, like many talented bands from the 90’s, such as Nada Surf, Toadies, and Harvey Danger, Marcy Playground was tainted in the eyes of hipsters by the double-edged sword of the radio-perfect hit song.]

Aside from the B-sides and previously unreleased tracks are 3 covers that highlight the musicality of Marcy Playground, especially the vocal prowess of lead-singer/primary songwriter John Wozniak.

The arguably over-covered “Hallelujah,” by Leonard Cohen, is executed with an “if it ain’t broke don’t fix it” approach. Though they may not bring anything new to the song, it retains its emotion and is a real treat.

On Neil Young’s “The Needle and the Damage Done,” Wozniak displays his chameleon-like ability to find the halfway point between the originator’s voice and his own. It’s refreshingly to hear Wozniak retain more than the original chords and lyrics when covering a song that is obviously very important to him.

One of the high points of Lunch, Recess & Detention is the cover of Procol Harum’s “Whiter Shade of Pale.” Here again, it appears that Wozniak approached the cover with more of a sense of admiration than that of innovation. Retaining the

A fantastic vocalist, it’s here that Wozniak’s skills are used to their utmost.

In short, this is a must have for die-hard fans of Marcy Playground. It would also be a great introduction for those interested in getting to know the band at a level of intimacy that surpasses that of their familiarity with “Sex and Candy.”

Not only is he a multi-media journalist, he is also an accomplished musician. He is the founder of SMI and drives the creative look, feel and branding for the publication. His years of writing, arranging, and performing live music in a variety of genres inform his ability to communicate the message and the mechanics of music. Roth’s work on SMI reflects his philosophy that music is the universal language, and builds community. He believes it has the power to unite people of every race, religion, gender, and persuasion.
Related ItemsMarcy PlaygroundNew Music PreviewNewstimmy held
← Previous Story Capitol Hill Block Party 2012: Lemolo lets it flow (Photo Slideshow)
Next Story → Capitol Hill Block Party 2012: Video Interview with The Grizzled Mighty