Roger and Me… a conversation with an authentic rock legend 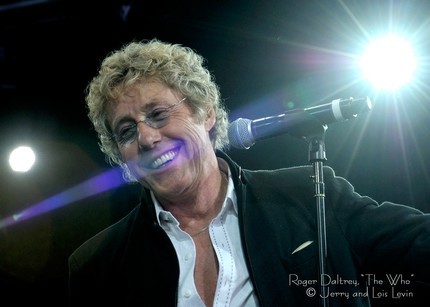 My conversation with Roger Daltrey took place two years ago at a pre-show party for a local charity concert that featured several rock luminaries. The Who is slated to perform at the Olympic closing ceremony this Sunday (8/12.) To honor the occasion, please enjoy one of the first pieces that appeared on SMI in April of 2010.

One early summer – years ago, my family moved up from San Jose and settled in Olympia, Washington. I left behind my friends, my soccer team, and the California sunshine for the June gloom of the Northwest. It was a big transition, one that did not come easy. I have always found that in my saddest and loneliest moments, music was my refuge. One of my most vivid memories as a teen was mowing lawns and baby sitting, so I could earn enough money to buy my first record.

My first record was “Tommy” by the The Who. I listened to that record everyday, all summer song. The powerful arrangements, haunting melodies, and thoughtful lyrics from Pete Townsend touched my life that summer in a very profound way. Along with the powerful music was the equally powerful voice of Roger Daltrey. When Roger sings, it is as if he musters every ounce of passion from his soul and unleashes it on the universe. No singer could interpret and deliver the great Pete Townsend compositions like Daltrey.

In my second year of college, I started my first band, “The Blitz,” (a power-pop trio) and saw “The Kids Are Alright,” an amazing documentary about The Who. I was transfixed as Roger Daltrey twirled his taped mic in the air and caught it without missing a beat. After that night, I taped my mike the same way – and when I performed, did my best Roger Daltrey mic-twirling interpretation.

Aside from musicianship and theatricality, something that distinguished The Who is longevity. One of my favorite shows ever was T-Bone Burnett, The Clash and the mighty Who at the Oakland Coliseum for what was supposedly their “farewell tour.” Of course, we all know the group continued long after that, and that the remaining members, Daltrey and Townsend, still play together and even appeared at halftime during the 2010 Superbowl. Once again, the two rock veterans will perform in front of a global television audience tonight in London for the Olympic closing ceremony – a testament to the British group’s legacy and international impact.

On April 23rd, 2010, at a private function for participants of the charity event, “Imagine a Cure,” I had the opportunity to meet and talk with one of my musical heroes, Roger Daltrey. Throughout my career, I’ve met lots of certified musical heavyweights and artists that I respect, without getting too starstruck.  But meeting Roger Daltrey was something else.

Roger was standing by himself in a warmly-lit den. He was dressed in dark, age appropriate, yet hip couture. When I first approached him, I found an extremely friendly and gregarious person, not a jaded, brooding artist. Roger seemed to really enjoy the fact that I valued what he and The Who contributed to my life. I told Roger about seeing the late John Entwistle on his last solo tour before his untimely passing.

“Was it loud? He always played so loud!” he said, with a gleam in his eye.

“Yes it was, very loud in fact, I stood in front the whole night just watching his hands,” I told him.

Roger confided that he always struggled to hear himself on stage because Entwistle’s bass was always tuned high and very loud.

As we continued chatting, we talked about music, and he shared stories and jokes. We talked about his scene-stealing appearance on That 70’s Show and how much fun he had playing the prissy music teacher, Mr. Wilkinson.

Roger and I share a common passion for “the beautiful game,” – the real football (soccer).  He’s an Arsenal fan, but I like their competitors, Chelsea.  We talked about who we think is going to be a favorite for The World Cup agreed it was Spain (and we were right!) We marveled at the feats of our mutually favorite player, Lionel Messi.

Roger was philosophical about life and his love of country. He misses friends who have passed on, but looks at death as just part of the cycle of life. He spoke about how much he enjoys visiting the Northwest, but was looking forward to getting back to his England.

When our conversation had reached it’s natural conclusion, I shook his hand and thanked him for his time and all of the great music that has brought so much joy into my life. Sometimes, it’s not a good thing to meet a hero. It can be a huge disappointment. But in this case, it was the opposite. Roger was even more friendly and engaging than I thought he would be. It seems that in the world of rock n’ roll he has seen and done it all – even helped invent it.

But when I shared with Roger what his music means to me, he looked me in the eye, smiled, and said, “Without you guys, we are nothing,” and clearly meant it.

Later that evening, Roger sat down in the kitchen with an acoustic guitar and launched into an impromptu Johnny Cash medley. It was wonderful. Of course, he treated us to some acoustic versions of Who songs. And although it was recorded on several iPhones, everyone agreed that this was a special moment of time among family — just as brilliant as a stadium production — but not to be made public. A mini Roger Daltrey concert in a kitchen of a friend’s house — Wow, did that just happen? Yes, it did, and it was a slice of time that I will treasure the rest of my life.

All in all, my experience of Roger is that he is classy, bright, charming, and extremely engaging.

Thank you for the inspiration, and thank you for all the great music, Roger. It was truly an honor to meet you. I look forward to seeing you rock the world again on the telly at the Olympic closing ceremony in your beloved home country.

Not only is he a multi-media journalist, he is also an accomplished musician. He is the founder of SMI and drives the creative look, feel and branding for the publication. His years of writing, arranging, and performing live music in a variety of genres inform his ability to communicate the message and the mechanics of music. Roth’s work on SMI reflects his philosophy that music is the universal language, and builds community. He believes it has the power to unite people of every race, religion, gender, and persuasion.
Related ItemsFeatured ArtistImagine a CureRoger DaltreyThe Who
← Previous Story Q&A: Jazzman Ravi Coltrane still moved by the spirit
Next Story → Kristen Ward drops new single from forthcoming LP (Free Download)