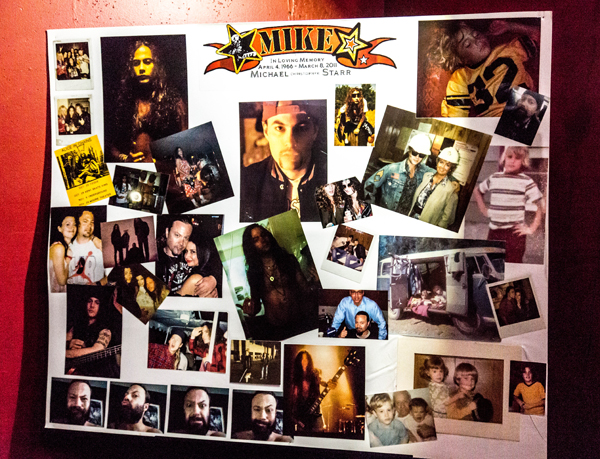 Fans, friends, and family gathered Thursday, March 8th, at Studio Seven to remember co-founder and Alice in Chains bassist, Mike Starr. It was the first memorial concert since his passing in 2011.

The night was filled with touching tributes, memories, and photos and video from Mike’s personal collection.

A video montage of Mike’s early days with Alice in Chains played in bittersweet counterpoint to the heartfelt performances.

A mix of new and veteran musicians performed, including Blacklist Union with Tony West, Grind, A Tribute to Alice in Chains, Amanda J. Hardy, Garden of Eden, Sin Circus, Steel Beans, and a stunning surprise performance by The Randy Piper Band.

Thanks for the music, Mike. We miss you.

Not only is he a multi-media journalist, he is also an accomplished musician. He is the founder of SMI and drives the creative look, feel and branding for the publication. His years of writing, arranging, and performing live music in a variety of genres inform his ability to communicate the message and the mechanics of music. Roth’s work on SMI reflects his philosophy that music is the universal language, and builds community. He believes it has the power to unite people of every race, religion, gender, and persuasion.
Related ItemsAlice in ChainsAmanda J. HardyGarden of EdenGrindJennifer AustinMike StarrRandy PiperSeattle Music HappeningsSin CircusSteel Beans
← Previous Story SMI New Music Preview: ‘Go Find Your Own’ by Pony Time
Next Story → Atoms For Peace makes a Sonic Boom debut in Seattle