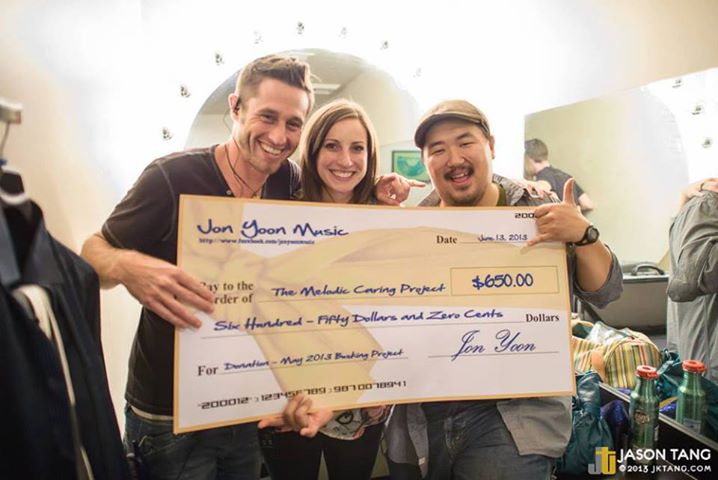 Jon Yoon is a fixture in the music community. He volunteers his time and talent to Seattle Living Room Shows by working the door or lending a hand in helping set up or whatever else is needed.

Rarely if ever, is he not seen without his trusty ukulele in tow, ready to break it out at any time to play a little ditty.

Jon broke out his instrument every day in the Month of May down at Pike Place market and busked his heart out to raise money for Melodic Caring Project. His efforts helped raise $650.00 for MCP.

This past Thursday night backstage at The Triple Door, prior to The Local Strangers and The Cellar Door show, John presented Melodic Caring Project founders Stephanie and Levi Ware with the check.

Not only is he a multi-media journalist, he is also an accomplished musician. He is the founder of SMI and drives the creative look, feel and branding for the publication. His years of writing, arranging, and performing live music in a variety of genres inform his ability to communicate the message and the mechanics of music. Roth’s work on SMI reflects his philosophy that music is the universal language, and builds community. He believes it has the power to unite people of every race, religion, gender, and persuasion.
Related ItemsJon YoonLevi WareMelodic Caring ProjectSeattle Living Room ShowsSeattle Music HappeningsStephanie WareThe Cellar DoorThe Local StrangersThe Triple Door
← Previous Story Sasquatch! 2013 picks and preview (Videos)
Next Story → Fall Out Boy Returns to Seattle (Photo Slideshow)