By Christine Mitchell on November 25, 2013@Housetornado37 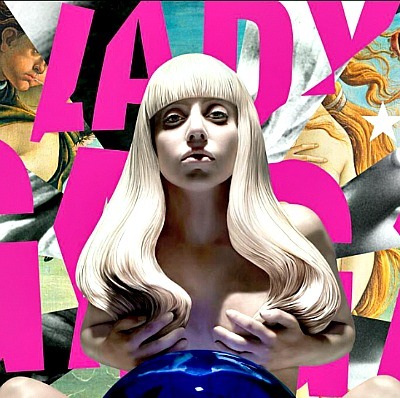 For what it is, Lady Gaga’s third album of new material, ARTPOP (Interscope Records), is good. Not awesome or groundbreaking, just good. And that’s just for what it is…music for partying. If I had drunk my face off and was dancing poorly all night long I would be okay with listening to this. But the truth is I was mostly scrubbing my kitchen floor while I was listening to this. And well, when you’re scrubbing the kitchen floor, or not partying, or simply just trying to listen to music…ARTPOP’s shiny veneer starts to blister away, and what’s underneath isn’t so pretty or appealing.

And it’s frustrating, because Gaga’s careful attention to detail in so many areas has kept me interested and searching for meaningful layers in her music for longer than I care to even admit. I own both of her previous albums and purchased them in an attempt to decipher her strangely compelling mystique. I raptly watched her HBO special and found it very entertaining. I enjoyed the meat dress, the Gaga in the Bubble, Jo Calderone, and the rest. She is a feminist, a staunch LGBT rights supporter, and a believer in being yourself, all things that I am gung-ho for. But sadly, when the ultimate product she is trying to move is so vapid and brainless in comparison to the image, does it really matter? Is Sandro Botticelli scrabbling even now to break out of his grave and strangle this woman for using his celebrated artwork on ARTPOP’s cover?

And yet…and yet I do call it good.  Throw thirteen music producers (including will.i.am) at anything and it will sound great. Even as I scrubbed the floor, I was dancing along to it. No one can deny Lady Gaga’s ability to sing; her voice has great depth and range. ARTPOP’s opener, ‘Aura’, finds Gaga sounding vaguely like Creatures’ era Siouxsie Sioux building up to a majorly danceable, ravey beat. ‘Sexxx Dreams’ is tailor made for the club (oh, but aren’t they all?) with its heavy snatchin’ from the DiVinyls and another batch ‘o’ bumpin.  And so it goes, from polished track to polished track (the track ‘Jewels n’ Drugs’ being a grating exception), and if you are interested in dancing the night away, this is the new music you’ve been waiting for. Just don’t listen to the problematic lyrics, if, you know, you pay attention to that sort of thing.

Take ‘Aura’, for example. The sticking lyric in the chorus is ‘do you wanna see me naked, lover?’ Oh dear. And it only goes downhill from there, the low points being ‘Do What U Want’, with R. Kelly cooing about how he can ‘do what I want with your body’. Um. Oh, and also ‘Donatella’, which is an ode to fashion guru Donatella Versace where Gaga deadpans, ‘I’m blonde, I’m skinny, I’m rich, and I’m a little bit of a bitch’. Granted this is meant to be taken tongue in cheek, but it all wears a bit thin when it seems that all Gaga thinks about is sex, clothes, money, and partying. There isn’t even a ‘Born This Way’ or other anthem that speaks on any other level than the material. It’s indulgent, and I find it irritating that Gaga sings about someone being a ‘Swine’ and being ‘disgusting’…perhaps she needs to swing that mirror around and take a look at herself. I wouldn’t let my daughter listen to this because I would rather she didn’t glom on to Lady Gaga’s apparent conception of what it’s like to be a grown woman. Again, taken tongue in cheek, I could deal with it, knowing Ms. Gaga’s philanthropic ambitions…but I can’t let ARTPOP off the hook. If she really wants to strip off her ‘Aura’ and let us see her for who she really is, Lady Gaga needs to get on that post-haste, because the appeal of the outer packaging is waning.

Decide for yourself: Watch Lady Gaga’s video for ‘Applause’:

Christine Mitchell has been poring over album liner notes pretty much since she acquired the skill of reading, and figured out the basic structure of rock songs at an early age. Whether it’s the needle popping into the first groove of the record, the beeps that signal the beginning (or end) of a cassette tape, or digital numbers ticking off the seconds from zero, music brings Christine happiness, ponderous thought, opportunities for almost scientific study, and sometimes a few tears. When she started attending live shows two decades ago, a whole new piece of the puzzle clicked in and she has been hooked ever since.
Related ItemsARTPOPLady GagaNew Music PreviwNews
← Previous Story Blitzen Trapper: A bowshot to the heart at the Neptune Theater (PHOTOS)
Next Story → SMI New Music Preview: Eminem – The Marshall Mathers LP 2