Home / Artist Spotlight / Flight to Mars 2014: still crazy after all these years

Flight to Mars 2014: still crazy after all these years 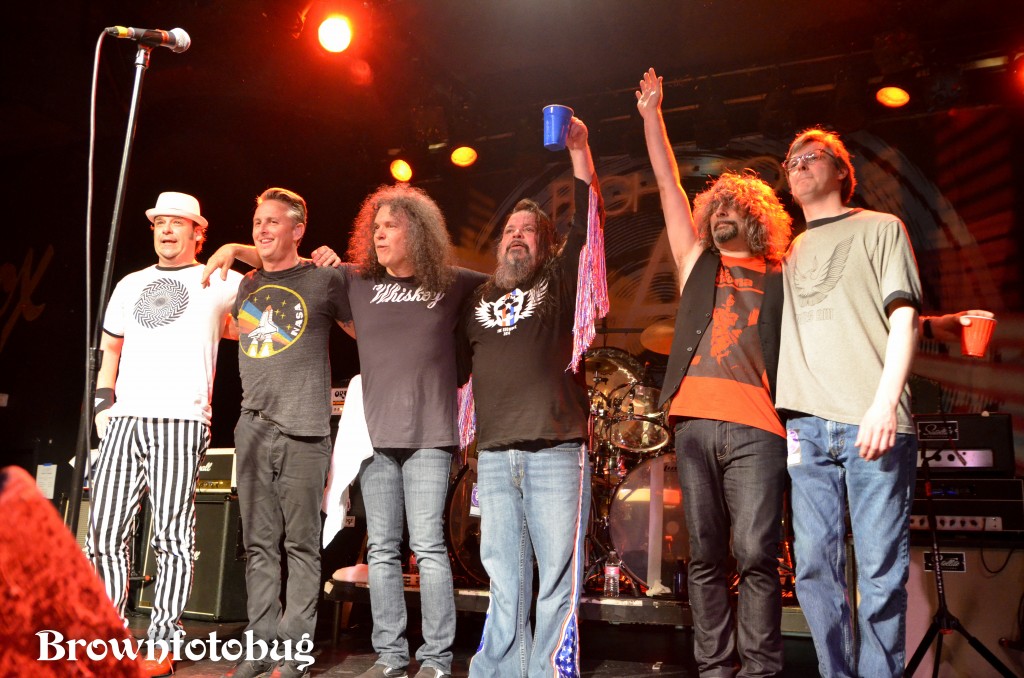 Mike McCready’s UFO cover band Flight to Mars has been playing a benefit show for Crohn’s disease and Colitis research (specifically CCFA Camp Oasis and the Jennifer Jaff Center) for twelve years, now. And while the cause is a great one, I have to admit that I was rather skeptical: a group that plays covers of a lesser known ’70s hard metal band? Really? And people sell the benefit show out every year for this? I know it’s Mike McCready of Pearl Jam and all, but come on. In any case I did feel that I had to give them the benefit of the doubt and check the whole shebang out.

We stood outside the bar next to the Showbox for half an hour so that we could wait two more hours and have first dibs on entry. There was a hefty crowd waiting to get in with us. We ended up positioned against the barrier on the right end of the stage. The show actually started about fifteen minutes early, which seemed freaky until I realized that the concert lasted nearly four hours.

The Young Evils are the punky little band that can. Vocalist Mackenzie Mercer sports a voice that combines elements of Debbie Harry and Carrie Akre into something a little nasal and sexy. She clung to her pink mike stand and/or danced, while lead guitarist/vocalist/songwriter Troy Nelson harmonized. Lyrics like “He doesn’t like my demons/ I thought I had them tucked away” and “They don’t like you anyway” bought darkness to the jumpy, upbeat tempo and throwback 80’s grooves…and then they covered Ozzy Osbourne’s ‘Crazy Train’. I saw a lot of folks pick up their current EP this night, although they are close to releasing a new album and most of the songs from the set are as yet unreleased. I’m holding out for the fresh stuff.

It was after The Young Evils that things began to complicate, as the revolving parade of musicians began. Danny Newcomb, former lead guitarist for Goodness and The Rockfords, came out to sing a couple of songs (he’s releasing an album on McCready’s label Hockeytalker soon). After this, Brad Sinsel and Rick Pierce of the late, great Seattle metal band TKO took the stage with McCready to perform the TKO song “Kill the Pain.” Sean Bates, who has been seen around town performing with Carrie Akre (Goodness connections abound), came on and performed a rousing version of Otis Redding’s “Try a Little Tenderness.” Covers of The Beatles’ “Hey Bulldog” and Tom Petty & The Heartbreakers’ “I Need to Know” followed, which were just okay and featured Tim DiJulio of The Glass Notes and (the sadly closing) Piecora’s New York Pizza. The backing band, which featured the likes of Chris Friel of The Rockfords on drums, did do a great job of working through the various songs, the best of which was Jimi Hendrix’s “All Along the Watchtower,” which involved most of the previous musicians on stage at once and also a pummeling drum solo by Friel. The “medley”part of the set ended with Neil Young’s “Hey Hey, My My” and tons of feedback.

In the nooks and crannies between performances and sets, prizes (artwork, posters, etc.) were raffled and/or auctioned off. A cool frameless print of a Mike McCready photo went for $2,000 . . . awesome.

Flight to Mars took the stage. I loved Mike Musburger’s (The Posies/The Fastbacks/Supersuckers) stripey pants and drum setup with a couple of gongs. That whole vibe reminded me of Keith Moon. Of course, McCready was there with an event-appropriate NASA t-shirt. DiJulio was back with his smokin’ guitar solos, along with bassist Gary Westlake. But the focus of the band goes to the arresting personage of frontman Paul Passereli. Decked out in a Flight to Mars shirt with wings of red, white, and blue fringe, sporting long, flying metal-hair, and a tongue that snakes out a la Gene Simmons, Passereli brought the crowd to life during the performance. Belting out UFO songs such as “Lights Out” and “Mother Mary,” Passereli brought the room straight back to the days of hard rock vinyl. The band stayed true to the originals, and really, with rock music such as this, while definitely dated, is also a timelessness in that it is pure and simple and doesn’t need crazy production or updating or theatrics to work. Now, if Flight to Mars was performing gig after gig after gig, it might get a little strange. But as a once-a-year one-off, it’s easy to see why this event sells out so quickly. It’s a blast.

The band had fun, too, as McCready leaned up against the barrier and into the crowd to play a particularly blistering solo. Passereli was all over the place, mugging and even stealing SMI photographer Arlene’s camera, taking some shots of the crowd going insane. PUSA guitbassist Andrew McKeag hopped up on stage for a couple of songs, and super-fan and large scale donation-maker Michael Winter came on stage to perform with the band. At one point, the band had to stop playing when a fight broke out in the crowd, but that fire was soon put out and we all soldiered on. After a short break, the band came back to perform an extended version of the song “Sweet Leaf,” various solos dovetailing into one another. Eventually all of the night’s performers were invited back on stage for Lynyrd Skynyrd’s epic ballad “Tuesday’s Gone.” It was just the right ending to a long, fun night, the various musicians’ camaraderie plainly evident, which spread out to the crowd and left us glowing, yet tired. Yes, I was convinced. I have no doubts now; Flight to Mars has won me over. 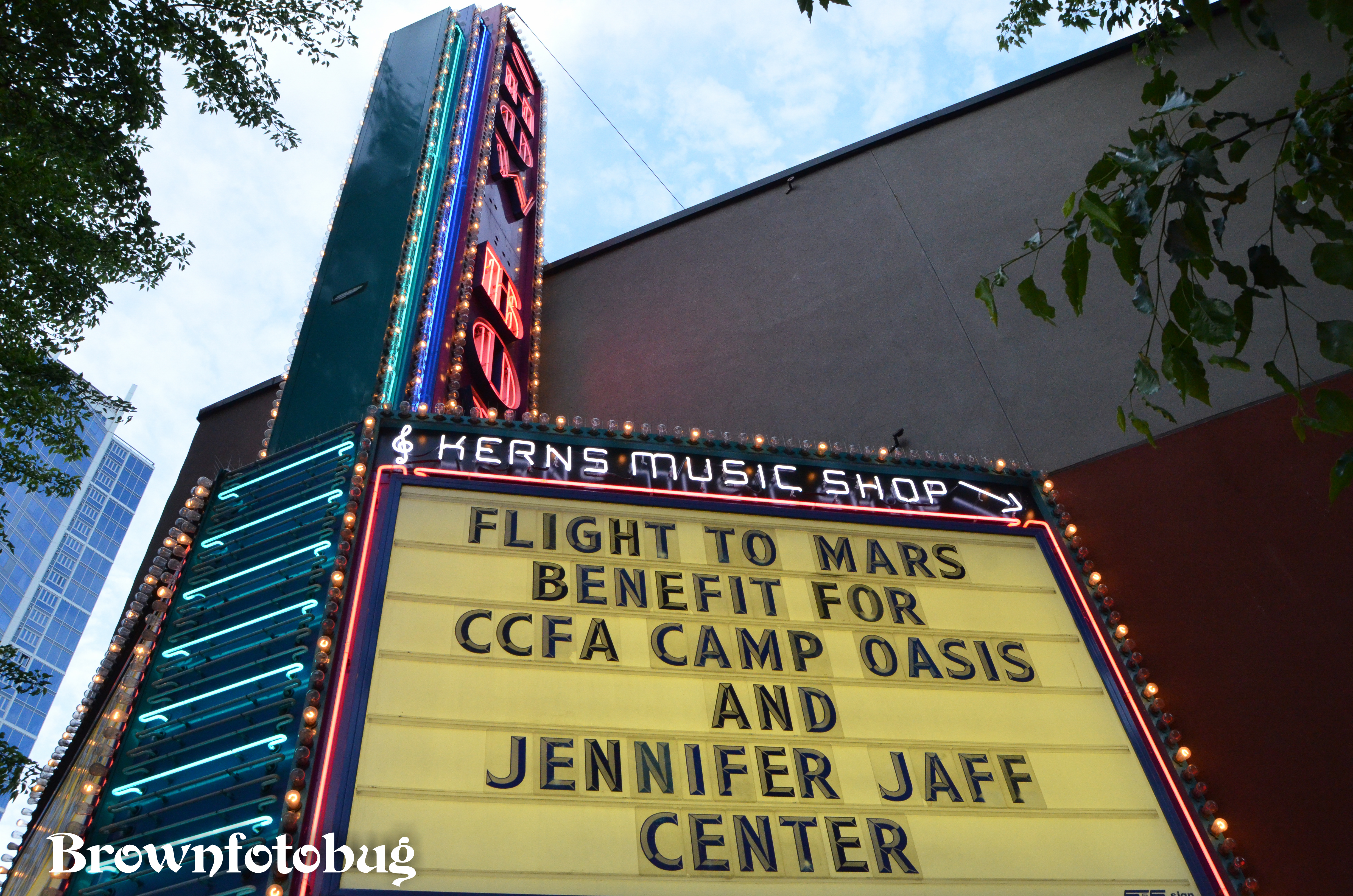 Christine Mitchell has been poring over album liner notes pretty much since she acquired the skill of reading, and figured out the basic structure of rock songs at an early age. Whether it’s the needle popping into the first groove of the record, the beeps that signal the beginning (or end) of a cassette tape, or digital numbers ticking off the seconds from zero, music brings Christine happiness, ponderous thought, opportunities for almost scientific study, and sometimes a few tears. When she started attending live shows two decades ago, a whole new piece of the puzzle clicked in and she has been hooked ever since.
Related ItemsArlene BrownChristine MitchellCrohn's DiseaseFlight to MarsMike McCreadyNewsSeattle Music HappeningsShowboxUFOYoung Evils
← Previous Story More than videos make “Spectacle” at The EMP (Photo Slideshow)
Next Story → Kyle Gass Band Rocks The Crocodile (Photo Slideshow)