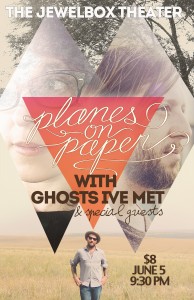 In this world of music that for the most part is processed through a meat grinder and dusted liberally with nitrates, it has been an absolute pleasure to make acquaintance with Planes On Paper. Since reviewing their East End Session EP last December I’ve had several friendly chats over the ether with singer/guitarist Navid Eliot, mostly about punk rock (and a little about cartoons). I’ve gained the sense that he’s all real/no bullshit when it comes to music, which follows through in practice with Planes on Paper.  Eliot and co-vocalist/artist Jen Borst plainly share a love of writing and performing music that is finely hand-crafted (and intimate) from the ground up, and hasn’t been distorted through the lens of what may or may not sell to the masses. This music is meant for the people who fall in love with it. It is created and packaged up entirely by the Planes on Paper from start to finish, and I appreciate that completely.

Planes on Paper will be performing at their first headlining show in Seattle at The Jewelbox Theater at Rendezvous on June 5.  I sent a few questions to the duo over to Yakima via email and received enlightening, humorous responses (see below). Needless to say I will be at The Jewelbox, both as a fan and also as part of this music machine (although I prefer to think of myself as an organic meat grinder . . . I strive to push a healthy, honest product to you.) I look forward to experiencing Planes on Paper live and finally meeting Navid and Jen face-to-face, and I hope to see some of you readers at The Jewelbox, too.

What follows is a short interview that involves talk of middle school jazz band, zen calligraphy, some percussion discussion, and acoustic NOFX (!).

1. Tell me the story of Planes on Paper.

Eliot: Planes on Paper is actually our second musical adventure together. We met a couple years ago now and I wasn’t really looking to put a band together, but we ended up doing a couple unplanned harmonies at a birthday party, and I was pretty amazed by Jen, particularly because I knew her as a photographer and artist and had no idea she sang at all. We promptly put together a five-piece rock band, and in the process of gigging pretty hard for a year and a half with that band, we decided to put together a separate set of duo material. The rock band kind of reached its lifespan, so now we can just put our energy into this. I think we both enjoy writing a lot, and Planes is definitely more writing-focused, so the whole process of getting used to singing with each other, and finding our strengths together through other projects, really led us to a great place.  Now that I’ve said that though, I think Impromptu Birthday Band should count, and this is really our third project together.

2. I’m so pleased that I’ll be seeing you at your next Seattle show at The Jewelbox Theater. How do you two feel about your first headlining show in Seattle? Do you have any special plans? Do you hang out around town, or is it a zip in, zip out sort of thing?

Borst: We have some special plans musically speaking for sure! Some surprise guests, and a few new songs no one has heard before. I think we’re both excited for the show, and being able to play a Planes on Paper set that is a little longer than when we’re somewhere in the middle of a three band bill. Like Navid said, we enjoy writing a lot, so it’s going to be nice to share some more of what we’ve been working on. 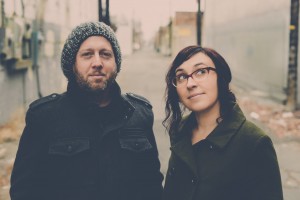 Eliot: We usually hang around town as long as we can, because Seattle is still kind of home for me, although sometimes that means sleeping on my parents’ futon, so “as long as we can” really means “one night.” And about The Jewelbox! I remember playing The Jewelbox WAY back in 2006 with Curtains For You, so I’m excited to be back there. I’ve always liked that room, and we’ve had a great experience so far, working with their new booker, Evan. He seems genuinely invested in making the shows he’s booking successful.

3. Tell me a bit about Ghosts I’ve Met, your opener for the upcoming Jewelbox gig. And for extra credit: Can we expect future Planes on Paper recordings to include some percussion?

Eliot: I knew Sam Watts when we were just kids, playing in the Eckstein Middle School Jazz Band, but hadn’t seen him since. One day, Matt (of Mikey and Matty, and formerly the same Eckstein Middle School Jazz Band) calls me and says, “Did you know Sam Watts is making records, and has been for years? You gotta hear them.” I Googled “Ghosts I’ve Met” and really haven’t stopped listening to him since. Sam is an amazing writer.  He also happens to be an amazing percussionist, so yeah, all the forthcoming Planes recordings will definitely have percussion.

Borst: Since Sam is a songwriter as well, I’ve always felt like he really understands our music. It’s sort of hard to explain, but Navid and I singing together has always felt very natural, and having Sam playing feels the same. There just isn’t any real “laboring” involved. And he is the best thrifting partner. While Navid is still asleep, we hit the estate sales.

4. Speaking of future recordings, do you have anything in the works? How do you prefer to record your songs? What is your timeline for releasing more music?

Eliot: We do have things in the works! We’re getting ready to record another little set of songs this summer, so timeline is maybe early fall? Preferred recording . . .I think it depends on the songs. The last EP we did completely live, no editing at all, which is a little nerve-racking, but they were all very personal songs, and we were just a duo, so doing it live felt right. For this upcoming project, we are recording as a 4-piece, with Sam, and with Steve Norman playing pedal steel. We’ll probably do most of the tracking live together, but in a more controlled environment than the last EP.

5. Jen, you do the graphic design for the band, right? What’s your process for creating the Planes on Paper ‘brand’?

Borst: Thank you! There hasn’t really been a consistent process for all of it. I kind of take it show-byshow, and think about what style I think fits the venue, and the other bands . . . the feel of the show, I guess. I’ve used a lot of found paintings and photos I’ve taken on the road, and occasionally do a painting myself to use. Each poster is really a stand-alone thing, so there hasn’t really been much thought of the “brand.” Navid’s lettering is the thing that is consistent across most of the posters. He spends hours working on little bits of calligraphy, and not actually just when we need some for the band. I think he actually enjoys working on it.

Eliot: It’s as close as I’m getting to Zen.

6. Navid, tell me more of these acoustic NOFX covers with Matt of Mikey&Matty. How did they come about and, more importantly (to me), which songs did you perform?

Eliot: Ah . . . the photo evidence in question is from The Fuse Box in Seattle, which is THE smallest venue in town, and is a hell of a lot of fun to play. Mikey, in fact is booking those shows, and he suggested the set. Matt and I have been playing in bands together as long as I’ve been playing, so the post-show jam sessions remain fun and abundant, and just a touch nostalgic. Since we were 13 or so, we’ve shared a love for punk rock. In fact, I think it was a birthday tradition for many years to buy each other punk albums. I’m pretty sure this last acoustic punk rock session included, “Freedom Like a Shopping Cart,” and “Linoleum,” by NOFX and the worst cover of Bad Religion‘s “Skyscraper,” the world has ever known. It was so much fun though. Mikey and Matty are two of the best musicians I could ever hope to meet, so given the opportunity, there will ALWAYS be a jam session, though not always punk.

Planes on Paper will perform at The Jewelbox Theater at Rendezvous with Ghosts I’ve Met on June 5 at 9:30 p.m..

Christine Mitchell has been poring over album liner notes pretty much since she acquired the skill of reading, and figured out the basic structure of rock songs at an early age. Whether it’s the needle popping into the first groove of the record, the beeps that signal the beginning (or end) of a cassette tape, or digital numbers ticking off the seconds from zero, music brings Christine happiness, ponderous thought, opportunities for almost scientific study, and sometimes a few tears. When she started attending live shows two decades ago, a whole new piece of the puzzle clicked in and she has been hooked ever since.
Related ItemsChristine MitchellJennifer BorstJewelbox TheaterNavid EliotNewsPlanes on PaperSeattle Music Happenings
← Previous Story KAIROS time is time well spent
Next Story → The Everett Fisherman’s Village Festival: A look back (Photo Slideshow)