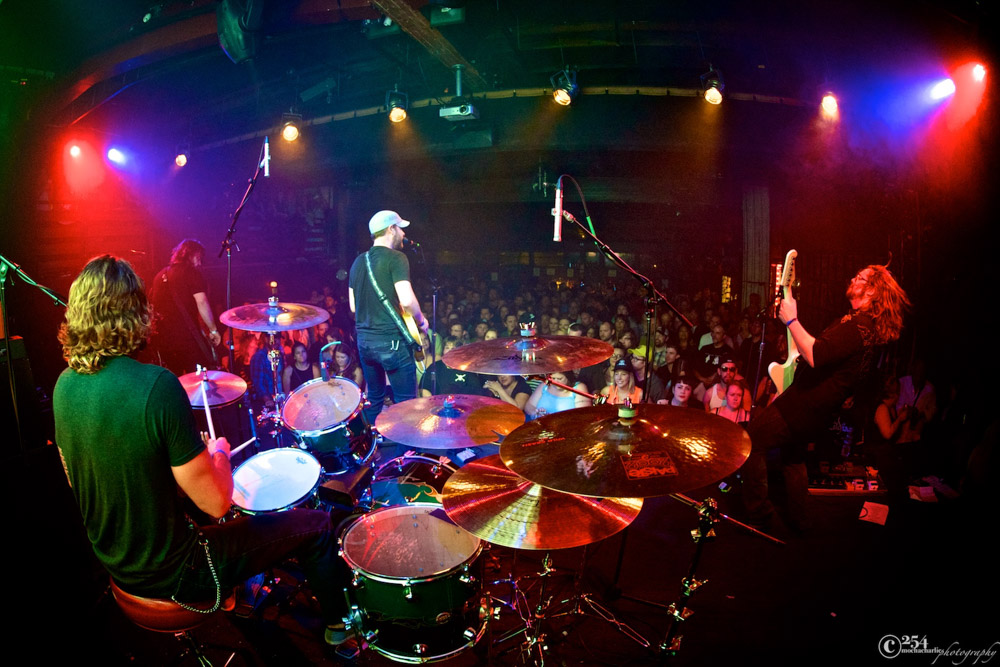 On any given evening, Seattle music fans fill venues to hear their favorite tunes played live. Friday night at The Crocodile was no exception, especially when fans had been waiting nearly a decade for this special night.

Seattle-based Van Eps had released a limited-run short EP a few years back, (some still available as “singles” on line), but since forming the band nearly ten years ago, they hadn’t put down enough tracks to make a full-length CD – until this year. Two songs, “Dirty South” (the first song they wrote as a band), and “Go Ahead” appear on both, but the newer versions have been redone and remastered.  When asked why it took them so long to produce a full-length CD, lead singer Matt Strutynski said that they had “wanted to for a while, but we didn’t really start to take things serious until about five years ago,” and they hadn’t been happy with enough songs until now. They also didn’t have the funds to make it really what they wanted, and didn’t want to rush into it knowing it wouldn’t be “great.”

Strutynski, who describes their sound as pure “rock and roll,” says his favorite song from the CD, “Vegas Rain,” is “catchy, and has great hooks. It’s the most fun song we’ve recorded so far, and it showcases the direction the band is going.” Their strategy for writing has been the same from the start. He and drummer Jake Jovanovich write the majority of the lyrics. Then, they start working on guitar riffs and take it to the rest of the guys where they work on adding other multiple sounds and finishing touches. They seem to be on a roll these days – after completing the nine songs on their self titled CD, they’ve written three new songs, which they added to their set on Friday night. During their set, they had a few special guests singing backup. Rachel Lerwill joined them for “Nineteen,” and Chantal Bailey jumped onstage for “The Ballad of John and Mary.”

As for future plans, Strutynski (who also has the title of band manager, occasional tour van driver, and booking agent), has scheduled a West Coast tour this month. They plan to add a few more dates to a second tour leg, hoping to hit some mid-west cities, including Denver, in the fall. They will play a few local shows throughout the summer, but because of band member schedules, they won’t be playing any regional music festivals.

The middle slot for the night was filled by Seattle band, Moneta. In addition to playing a variety of shows around the region since 2007, they also played Van’s Warped Tour ’08-’10, and have opened local dates for national acts such as Paramore and Smashing Pumpkins. Their latest CD, The Only Constant,was recorded at Robert Lang Studios by acclaimed producer Jim Wert (No Doubt, Incubus, Jack’s Mannequin).

Opening the show was Spokane-based band, The Nixon Rodeo, who had everyone in the venue rockin’with on-stage visuals, including colored smoke boxes that went off at specific points during the show. Lead guitarist Brent Forsyth took center stage throughout their set, but was joined up front for the last few songs by drummer and background vocalist Ethan Harrison.  Bassist Travis Singleton moved over to the kit, allowing Harrison the ability to more closely interact with fans in the crowd, move about freely on stage and sing atop band-stamped light boxes, with the occasional jump from box to center stage.

Mocha Charlie is an amazing photographer who has a real passion for music. She has her finger on the Pacific Northwest music pulse. She covers and shoots several shows per month in and around the region. She a brilliant photo journalist but most importantly, she is also a mother who does her best to balance out her life and live it to the fullest. Mocha Charlie uses her passion and talent to support the community, her friends and family any way that she can.
Related ItemsFeatureMonetaThe CrocodileThe Nixon RodeoVan Eps
← Previous Story Jonathan Richman at The Crocodile
Next Story → SMI Around The World: Nneka’s spiritual musical journey