Jonathan Richman at The Crocodile 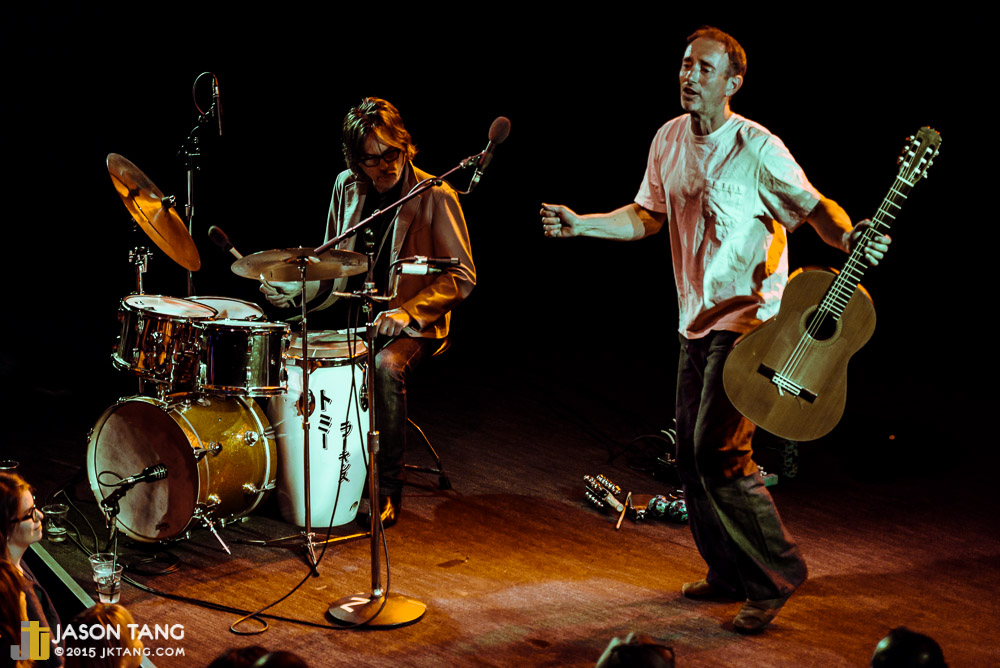 Jonathan Richman started the show Wednesday at The Crocodile with little ceremony. With no opening act and no introduction, Richman strode on stage in jeans and a white t-shirt with his nylon-stringed acoustic guitar, as long time percussionist Tommy Larkins took a seat at the drums. Richman began plucking and singing “Behold The Lilies Of The Field” as Larkin laid down a laid-back beat with brush and mallet. The near sold-out crowd giggled as Richman began to sway his hips in his characteristically cute, boyish manner to the song’s jazzy feel. He seemed relaxed, yet adorably awkward.

In fact, Richman is at times so loose that it can be hard to tell what is rehearsed performance or lyrics, and what is coming to him in the inspiration of the moment. By playing in a duo with the same percussionist for so many years, Richman has found a freedom to innovate, improvise, and let the spirit move him throughout the night. This particular night was by turns funny, insightful, celebratory, and sad. And above all, it was intimate, raw, and real.

Cheers of recognition erupted as Richman launched into the bouncy instrumental, “Egyptian Reggae,” one of his earlier hits. Richman spent good portions of the song, and indeed much of the show, vamping off mic, doing a sexy shimmy with bells at the edge of the stage before launching into a sort of hieroglyphic dance. This is signature stuff for him, as these stripped down shows seem to be as much about these non-musical performance aspects as any lyrics or notes.

But Richman is much more than just a goofy dancer and wide-eyed funnyman. His songs are steeped in pathos, heart, and honesty.  And despite the simple ’50s rock and early R&B structure of many of his songs, they have much to teach. The crowd was treated to a brief art history crash course on “No One Was Like Vermeer,” as Richman moved off mic and around the stage, describing various canvasses by the Dutch master.

The room was reaching sweltering levels by now, after a warm Seattle day. Richman is a peculiarly particular performer. At The Crocodile he had requested that the venue turn off the air conditioning system so the room could be truly silent. He told the audience not to blame the venue for the heat, saying he wanted it to be as quiet as possible because, “I want to hear every cruddy little note.”

Sure, it was hot in there, and asking for no air conditioning is unusual. But this isn’t just a no brown M&Ms rock star affectation. It allowed Richman to move off mic, entirely unamplified, and still be heard well in the smallish room. It also created a closeness between performer and audience, different from many other shows.

So, when he launched into the wistfully nostalgic heartbreak of “That Summer Feeling,” and started telling a story about the particular smell of the dust and dirt at his four-year-old playground of memory, and his love for a five year old “older woman,” everyone in the venue was hushed, hanging on every word.

Much of what Richman said and did evoked laughter, but his humor belied a seriousness and depth. He explained that he doesn’t use computers or cell phones, and that caller ID takes all the fun and surprise out of prank calls. But underneath this is a clear and genuine desire for real, honest human connection, as heard in songs like “Because Her Beauty Is Raw And Wild.”

It is interesting to see how much this enigmatic troubadour has left behind his early musical self. He became a proto-punk hero in the early ’70s with The Modern Lovers, a garage band that served as a sort of cultural and sonic bridge between The Velvet Underground and The Ramones, and inspired much of the punk generation. But Richman broke up the band just as they were getting big, preferring instead the stripped-down acoustic approach he has largely employed ever since. For many years, he was something of a cult figure, before gaining wider recognition once again for his part as a sort of modern Greek chorus in the 1998 movie “Something About Mary.”

Richman took a global detour in the middle of the set, singing songs that included Ojibwe, Spanish, Italian, Hebrew, Arabic, and French. Throughout, he continued to reassure the audience, saying that if the next song is in Italian, it’s OK, because it’s just 17 adjectives for the party.

He drew the crowd back in with favorites like “I Was Dancing In The Lesbian Bar,” before taking more serious detours into songs about exploring the darkness of life, or opining that he doesn’t want to go back to the brutality of the traditional world. Richman plays with humor and sorrow, joy and pain. He brings both sides of the coin to bear.

“Audience, folks! Guess who’s happy?” Richman later announced, “Jonathan is happy! And that’s because it is close to 101 degrees, not 72 with air conditioning. And that’s why we’re having so much fun.” He also answered in a falsetto voice (as the audience),  joking: “I’m glad you’re having so much fun, Jonathan, we’re sweltering in here!”

But in truth, smiles abounded throughout the room, and when it was appropriate, a total silence pervaded, allowing all focus to be on the musicians. People seemed to be attentively enjoying themselves despite the sweat. He closed out the set with the jaunty dance number “These Bodies That Came To Cavort,” about our corporeal desires to be free, active, and healthy. The crowd cheered enthusiastically, refusing to let Richman leave the stage. For an encore, he played the beautiful, almost Buddhist-tinged ballad “When We Refuse To Suffer,” about all the things we miss out on when we try to avoid life’s inevitable lows.

Richman seemed to decide to add an additional poem-song at the last minute, a wrenching description of the things he learned as his mother lay dying in a nursing home. He acknowledged the pain and sadness, but blessed the audience with the wish that they may also have this chance to learn, even in the ravages of the deaths of those closest to us. It was a painfully honest, intimate end to an excellent, unique show.

Isaac Kaplan-Woolner is a live music fanatic and radio nerd living in Seattle. When he’s not attending concerts, he works as an assistant producer for the public radio show Travel with Rick Steves. He also volunteers and occasionally moonlights at KEXP Radio, and serves on the board of directors for the nonprofit Fremont Abbey Arts Center. He got his start in radio with a punk show at the tiny 10 watt station WNMH at his highschool in Northfield, MA, then in college volunteered at KBOO radio in Portland, OR, before landing a job as a DJ and news producer at KOHO Radio in Leavenworth, WA. Isaac collects vinyl, gig posters, ticket stubs, and ukuleles. The first CD he bought with his own money (when he was 11) was a used copy of Public Enemy’s Fear of a Black Planet. These days he listens to all sorts of music, though he still has that Public Enemy CD somewhere.
Related ItemsFeatureJonathan RichmanThe CrocodileThe Modern LoversTommy Larkins
← Previous Story BIG BLDG BASH: on the right side of the tracks
Next Story → Van Eps Draws Crowd on Heels of Full-Length CD Release