By Alicia Kamenick on June 30, 2015@corianderstem 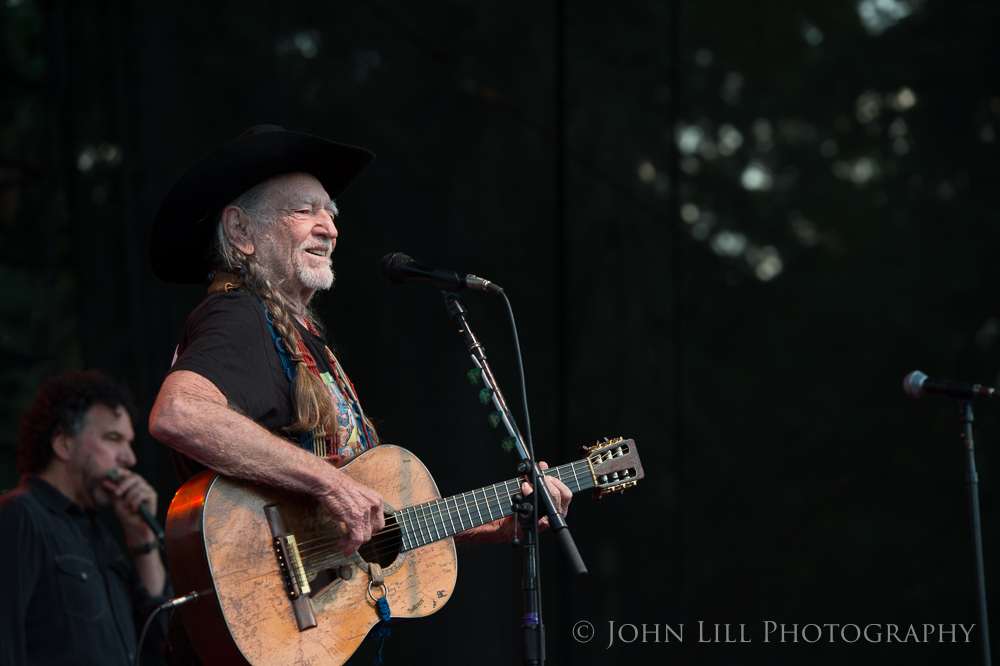 Saturday night brought a sharp contrast in two country voices: the pure, clear tone of Alison Krauss’ angelic soprano, and the instantly recognizable gravelly warmth of Willie Nelson. As the sun finally settled behind Marymoor Park’s trees on the hottest day of the year, the crowd gave a sigh of relief and settled in for an evening of bluegrass and classic country.

Alison Krauss and Union Station led off the show with an hour’s worth of some of their best tunes. A long-standing band, they alternated between energetic bluegrass and sad ballads, Krauss’ voice and the band’s harmonies blending beautifully no matter what the song’s mood.

“We like the sad songs because we don’t believe the happy ones,” Krauss quipped. “And we don’t want anyone to feel good leaving our shows.” Thankfully, they failed in that mission, as the crowd was definitely not feeling bad at any point. “I Am a Man of Constant Sorrow,” in particular, had people in high spirits, to no surprise.

Dan Tyminski (aka the voice coming out of George Clooney’s mouth in “O Brother, Where Art Thou?”) traded lead vocals with Krauss throughout the set. “The Boy Who Couldn’t Hoe Corn” was a highlight, with Tyminski beginning the song with Dobro master Jerry Douglas. Douglas performed an impressive solo number mid-set.

The set closed with gentle, but too-short renditions of “When You Say Nothing At All” and “Down to the River to Pray.”

Krauss and Union Station not only impress with their musical skills, but with their long-standing tenure of playing together – a rarity in the modern music landscape. With Ron Block (banjo) being on board for 24 years, Tyminski for 23, Douglas for 18, and Krauss and Barry Bales (bass) being there from the start at 25 years, the band’s years of honing their craft and songwriting shines.

With a big Texas state flag as his backdrop, Willie Nelson took the stage and brought the audience on a trip through a long and varied life of songs. At 82, Nelson still has his trademark braids and guitar named Trigger, and if his voice is wizened enough that he needs to vary the phrasing and melody of some of the songs, his work does not suffer for it.

With the musical catalog Nelson has in his back pocket, a seasoned concert-goer might expect that while the man has so many songs to choose from, the biggest and most crowd-pleasing might regularly appear as the encore. Not so with Nelson – his setlists vary so much it’s nearly impossible to predict what might pop up next. “On the Road Again,” “Always On My Mind,” “Crazy” – all appeared in the main set.

Nelson’s touring band The Family, featuring his son Micah Nelson on drums, was loose and capable, harmonica and boogie-woogie piano providing accompaniment for Nelson’s guitar. Nelson played with the fans, throwing a bandana and later his hat into the crowd.

If the expected clouds of pot smoke were not as prevalent as one would expect at this concert, the man did provide musical cannabis reference, with “It’s All Going to Pot” (from his new album Django and Jimmie, recorded with Merle Haggard), and the penultimate song “Roll Me Up and Smoke Me When I Die.” You got it, Mr. Nelson. You are a national treasure and we would be proud to do as you request.

Alicia is a Midwest transplant who loves Seattle but misses thunderstorms. Her musical obsessions began when her coolest aunt gave her a copy of K-Tel’s Rock 80 album for Christmas when she was 7. She spent many years studying piano and voice, but the force of rock and roll won, so while she still sings in a local chorale, her true musical passions lie more with The Beatles than with Beethoven. When she’s not working at her job in HR, she can be found singing bad pop songs at the top of her lungs … although sometimes she does that
Related ItemsAlicia KamenickAlison Krauss and Union StationBarry BalesDan TyminskiFeatureJerry DouglasJohn LillMarymoor ParkMicah NelsonRon BlockWillie Nelson
← Previous Story SMI Radio Ep. 111 On Demand: Catherine Feeny & Chris Johnedis and Carrie & Kristen Watt
Next Story → INSIDE OUT: The Music Industry from the inside . . . out