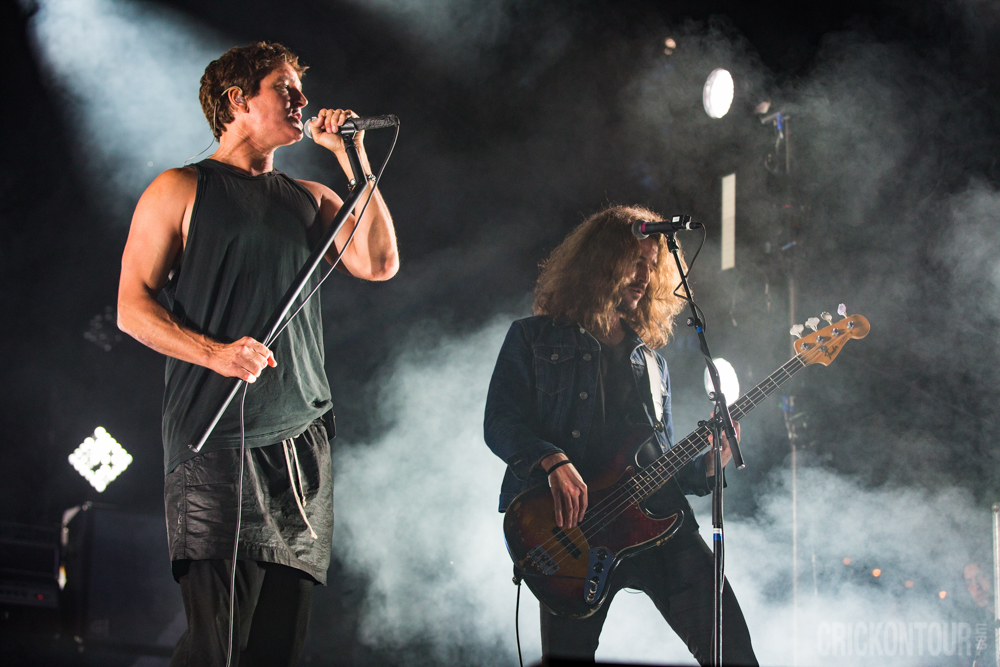 There are a lot of things one could expect to do on a Wednesday afternoon these days, but re-living one’s preteen years is not necessarily a regular occurrence. That’s exactly what happened last Wednesday when Third Eye Blind and Dashboard Confessional played to a sold-out crowd at Marymoor Park. Seriously, hearing an entire field of people sing along to those familiar words “I wish you would step back from that ledge my friend,” is a surreal moment to say the least.

Sixteen years after The Swiss Army Romance was released, Chris Carrabba’s earnest emo wail was still as fresh as ever, and surprisingly so. For a band that hasn’t released an album in over five years, they sounded tight and authentically Dashboard, and not like they were trying to please the people who fell in love with their music in their most fragile pubescent years. There were obviously old favorites like “Screaming Infidelities” and “Remember to Breathe,” but also a couple surprises. Like the fact that Carrabba is actually in another band called Twin Forks, and brought out one of his band mates to play one of their songs, which sounded like it came straight out of Seattle. It was weird. The songs sounded polished but raw, and the band seemed like they were actually having fun, and not putting on any sort of act.

Third Eye Blind took the stage to a loud and raucous opening with “Graduate.”  It was a selection of old emo kids, bros, bros’ girlfriends, and proper grownups – and everyone ate up the nostalgia like it was a box of Kraft macaroni and cheese. The set was well planned, with songs off the band’s forthcoming Dopamine sprinkled amongst the hits that personified 1999. It’s hard to believe that front man Stephen Jenkins is 50 years old this year, because his energy was on par with any 20-something rock star these days, plus his skirt over sweatpants getup definitely gave out the perfect college rock vibe.

The main set was a good 15 songs – the highlights being the epic angsty ballad “Motorcycle Driveby” and an odd but awesome cover of Beyonce’s “Mine.” Plus, they did finish the set with “Jumper,” because they basically had to. What better way to leave people before an encore? And for that encore, they brought it home with “Something In You,” the everlasting “Semi-Charmed Life” and a simple chant of “Bonfire,” off 2009’s Ursa Major.

While Jenkins’ stage presence was as animated as ever and the band sounded virtually flawless, some of the banter in between songs didn’t feel completely authentic. As someone that attends a lot of concerts – most of them being with newer bands – it’s easy to catch when a band is pandering to an audience, which is kind of what it felt like Third Eye Blind was doing.

However, the show sold out a month in advance for a reason. The crowd was feeling all kinds of happy teenage feels and left Marymoor park feeling warm and fuzzy. It’s the same feeling one gets when they eat a whole box of Kraft mac ‘n cheese – happy and wistful and sentimental for a simpler time. And that’s nostalgia at its finest.

How’s It Going to Be

Rites of Passage (Portions of U2’s With or Without You)

Abby Williamson is a photographer, writer, and video blogger with a passion for live music – especially the local scene. She recently moved to Seattle after commuting from Gig Harbor for shows an average of once a week for five years, so she’s happy to not have to drive as much and photograph even more concerts! When she’s not elbowing her way up to the front row at a show or sorting through thousands of photos of those shows, Abby also does freelance wedding photography, all the while cultivating a decent-sized following on YouTube. Abby has contributed to several music blogs over the last five years (and she’s really excited to join the SMI team!), and has been published in at least one album booklet for the band, Someone Still Loves You Boris Yeltsin. She would like people to know that while music photography and writing is a huge passion in her life – she is a fan first, photographer second.
Related ItemsAbby WilliamsonAlex Crickdashboard confessionalFeatureMarymoor ParkThird eye blind
← Previous Story Parachute Strips it Down on Their Summer Acoustic Tour
Next Story → Capitol Hill Block Party Day 1 Recap