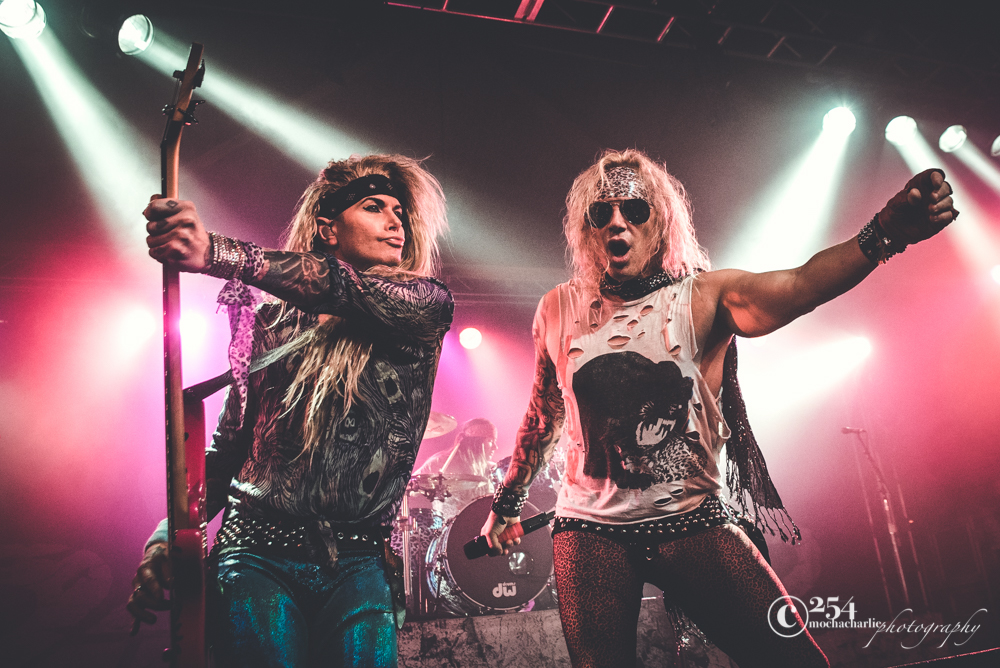 Steel Panther once again drew crowds of fans, who took the opportunity to pull out their ’80’s attire and head on down to Showbox SoDo for an evening last week. The band members are still not shy about gracing the stage in tight spandex, sequin scarves, big hair, and belting out racy lyrics set to ’80s glam metal tones. And fans love it! With hands of horns held high, fans sang and whipped their hair throughout the set.

Steel Panther’s music style has been described as raw power, instilled with what the ’80’s generation referred to as “classic heavy metal.”  They continue to make fun of themselves and that generation, the one to which they are using as their muse, by singing parody-type lyrics that blend nicely with that music style. Fans dig it. They come dressed up, and ready to party.

As for the band, they poke fun of each other, and those in the crowd, but it’s all in good fun. For this “The Well Hung Over Tour,” they’ve invited Skelator to open the show. Lead singer, Jason Conde-Houston, wields a gigantic sword on stage, and at times whips his immense mane around so much that from certain vantage points looks as if his head is completely shrouded and even looks as if it’s engulfed his leather jacket. Their music style is similar to Panther, poking fun at popular iconic elements from the ’80s as well as singing about what may be more traditional themes from that genre such as death, blood, and metal.

The Steel Panther guys have busted out some brand new spandex for the occasion. You’ll still see bassist, Lexxi Foxx stop mid song to gather his wits and apply multiple layers of hairspray and lip gloss at the vanity mirror side stage. You’ll still see guitarist Satchel rockin his guitar riffs while keeping his wig in place perfectly, bound by one of his many headbands. And, although he’s hidden behind the kit, amid stage fog and dimmed lights, drummer Stix Zadinia will be keeping the beat throughout the evening. As for lead singer Michael Starr, he’ll be shaking his . . . sequined scarves around while interacting with the rest of the guys on stage, and those super-fans that grip onto the barricade in the front of the crowd.

If you think that ’80’s music is going the way of the dinosaur, the fact that the band have tour stops already booked through next summer may be an indication that at least for Steel Panther, they’re not moving into extinction any time soon.

Mocha Charlie is an amazing photographer who has a real passion for music. She covers and shoots several shows per month in and around the region. She a brilliant photo journalist but most importantly, she is also a mother who does her best to balance out her life and live it to the fullest. Mocha Charlie uses her passion and talent to support the community, her friends and family any way that she can.
Related ItemsFeatureMocha CharlieShowbox SodoSkelatorSteel Panther
← Previous Story GWAR Takes on Internet Dating
Next Story → Marina and the Diamonds Sparkle at the Paramount