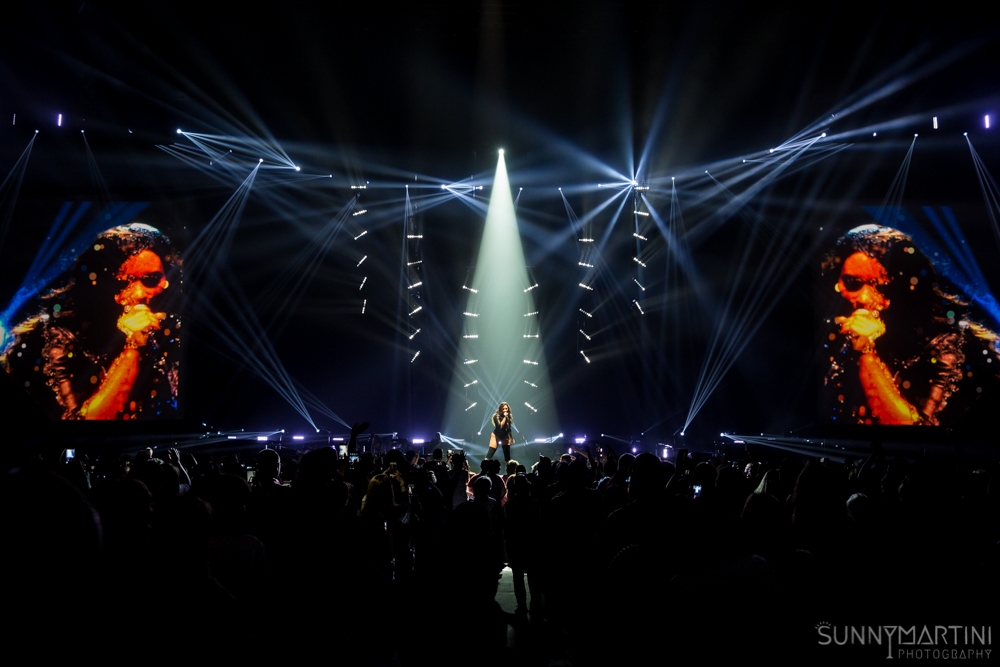 Is the future less flashy? Judging by the low-key production of the Demi Lovato and Nick Jonas “Future Now” tour, it just might be. That doesn’t mean the Seattle stop of the 2016 Honda Civic Tour at KeyArena was anything less than a perfect pop pairing. Now in its 15th year, the annual summer concert series has brought a wide range of popular performers to the masses, and this double hit of radio regulars definitely brought those masses out in droves.

There were plenty of youth in the house, and plenty of parental chaperones. Teen girls bounced about in baseball caps and track jackets emblazoned with “confident,” Lovato’s 2015 album title, while applying lipstick via the selfie cams on their phones. With no props, no cadre of backup dancers, no pyrotechnics in tow, and the band sunken halfway into the back of the stage, the focus stayed on the performances. And the performances paid off.

The night kicked off with opener Chord Overstreet – likely most known for his central role as Sam Evans on hit television series Glee – for an acoustic set to get the crowd going. Blonde locks loose around his shoulders, and accompanied by a second guitarist, Overstreet’s effortless guitar-pop generated plenty of attention. “This is one of my favorite songs, I’m gonna play it for y’all,” he noted, just the second track in, and delivered a cover of Bonnie Raitt’s classic “I Can’t Make You Love Me,” with everyone singing along. A cover of Shawn Mendes’ “Stitches” really got the crowd going, the screaming reaching fresh heights. Overstreet ended his set with his new single, “Homeland,” set for release August 26th, and had everyone light the arena with their phones for a beautiful exit.

On a stage outfitted with only a video screen, Nick Jonas was up next. In heavily zippered denim and dark sunglasses, he opened with “Levels,” bathed in white light and strutting down the thrust of the stage, getting up close and personal with the fans. While Jonas didn’t really dance, and there were no props other than the mic stand, he moved well, delivering a set balanced between his two latest albums.

Jonas made killer use of his notable falsetto, letting out major notes on tracks like “Champagne Problems” and letting the crowd sing parts for him on multiple tracks. Midway through his set, he grabbed a guitar and went partially-solo (until the band broke in halfway through) both “Who I Am” and “Santa Barbara.” Then thanked the crowd and said, “Now let’s bring this party back up.” And up we went, notably with “Bacon,” a semi-absurd track accompanied by a too-literal video of greasy bacon sizzling in a pan. With lyrics like “One thing I love more than being with you/And that’s no ties, no drama in my life/Yeah I, I woke up like this/Feelin’ like, aw shit, throw some bacon on it,” it made for plenty of cheer.

After a short break, not even really a break, just a darkening of the stage, Demi Lovato appeared on a podium, long tresses blazing, a black leotard that was basically a thong in the back, and over-the-knee boots. For opening track “Confident” she came out blazing, all big notes and power, to lots of screaming from the crowd. For a lack of flash, Lovato sure didn’t seem to need it, letting loose on powerful tracks like “Heart Attack” and the sexy new “Body Say.” She, too, slowed it down for a bit, pulling up a stool at the front of the stage for older tracks “Fix A Heart,” and “Nightingale.” She was then joined on stage by Bea Miller, a former contestant on The X Factor and old friend, for Miller’s “Yes Girl,” which saw them trading belted lyrical turns.

Jonas reappeared with a white grand piano to accompany Lovato on “Stone Cold” and then the two traded multi-song encores, again teaming up for “Close,” Jonas’ latest collaboration with Tove Lo, Lovato now clad in a white version of her previous outfit, complete with floor-length cape. It was, overall, an admirable performance on both their parts.