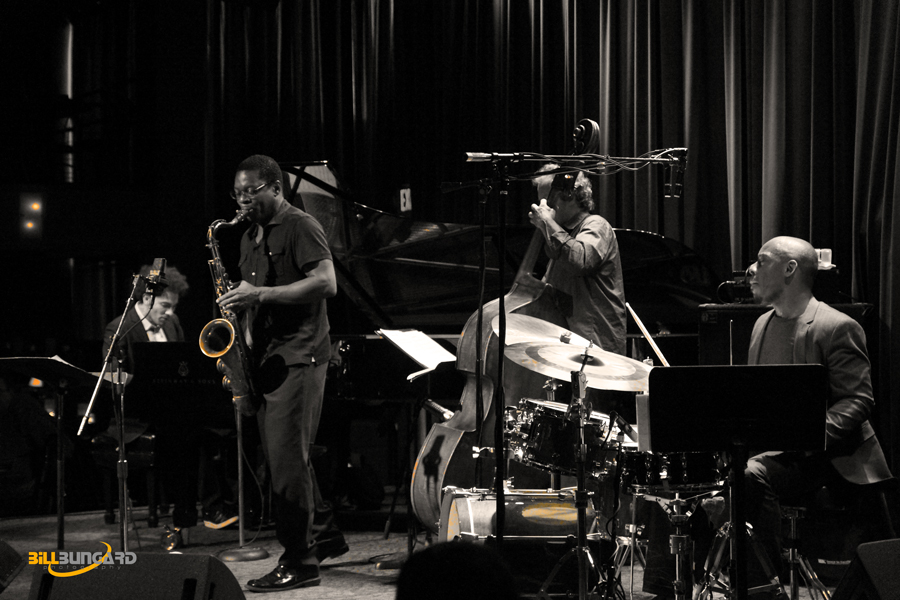 Most well-known popular artists of today find it difficult to avoid having their names engraved into mainstream consciousness, and often at the expense of addressing their public behind a product that delivers only a fraction of what took place at a time when the art itself was created. Upon entering Dimitriou’s Jazz Alley last Wednesday evening there was an immediate sense that Ravi Coltrane and his new quartet would pierce the veil, arriving to a Seattle audience that was truly prepared for anything.  A fragrance of welcome permeated the air, and set up the perfect transition from a day of beautiful sun into what became a captivating evening of music.

Following announcement of the band, EJ Strickland took the lead on drums and established the mood, creating a secondary platform for Ravi, who looked on with his tenor saxophone until he found the perfect moment to approach the stage and announce the first song, entitled “In Three For Thee”, a track from his debut as a leader, Moving Pictures (RCA). A fitting introduction for this ensemble, the new interpretation succeeded in availing each member of the group with stunning clarity while retaining elements of some of jazz’s classic quartets.  The first solo came from Ravi, and foreshadowed how the evening would evolve, foraying between improvisation and melody, and gracefully sculpting every moment with strict attention so that each piece was allowed to rise like pastry dough. Dave Virelles’ initial commentary on piano nodded to players such as McCoy Tyner and Don Pullen, stacking each motif upon new harmonies as if he was building a staircase, and then suddenly abandoning harmony altogether in order to conjure the full range and body of his instrument. EJ’s groove continued to deepen behind every solo, expanding and ascending to an altitude that infused the air with intensity, and with equal amounts of texture, color and space. While his vocabulary in rhythm proves to be immense, an endless string of drummers throughout history became apparitions within the space of a single tune, and it was Roy Haynes that continued to surface repeatedly in spirit.  If for no other reason, this historical reference illuminates EJ’s mastery and affection for dynamics – how countless shades can be relevant in expressing the intention behind the present moment, and dedicated to servicing the whims of each of his fellow constituents with astonishing precision.

Ravi greeted Seattle as if he could be in his hometown, and with a gentle demeanor that humbly mirrored a distinctly quiet and powerful wisdom on his instrument. What came next was “Who Wants Ice Cream”, the first statement from his new album Spirit Fiction (Blue Note), penned by his close friend and collaborator Ralph Alessi, who also happens to be one of the finest trumpet players on the scene. The studio recording features a band reunion that Ravi assembled for his second album From The Round Box (RCA), which along with Ralph included Geri Allen on piano, James Genus on bass, and drummer Eric Harland.  It was thrilling to hear this particular piece live because the interplay presented itself as being stripped down to virtual silence, sketching a form which grants a point of departure, but then for the band acts as a springboard for the ultimate opportunity in defining its true identity.  The bass work of Hans Glawichnig shines here, as he at first remains faithful to the structure, behaving almost as if he were another drum kit – like a shoe walking in stride with the bass drum, simulating a singular and uniquely organic sound!  Symmetry could be found within every movement and punctuation, laying out a widened canvas for the piano to solo upon, which beautifully contrasted the rhythm section and came over as very harp-like in nature.

For his first solo of the evening, Hans came to the fore with a myriad of expressions in just about every register, bringing out the wood in the bass and dropping in surprisingly dizzying, bumble-bee like figures that resonated with European luminaries such as Dave Holland (from his early days at ECM), Miroslav Vitous and Palle Danielson.  At the conclusion we see Ravi slip back in with a melodic refrain, removing an invisible cloak as night turns back towards day, while the piano and bass double one another, drifting back into an accompanying role that lavishly illustrates the harmony.  The pleasure of becoming acquainted with Han’s craft and approach was perhaps best exemplified by his ability to catch melodies as if they were leaves falling from a tree, and consistently deferring to the direction and spirit of the drums in a manner that very much personified what it might be like to dress for the weather. And while leaves may spiral downward, Ravi made us feel as if we could be falling upward, carving the air with a resplendency of tone and depth, often found with the piano swirling around his horn like a centrifuge.  When considering the body of John Coltrane’s work, Ravi affirms a sacred connection with his father, however by no means did we see this happen on a conceptual level.  Rather it was the ritual alone – the physical act of playing, and our being afforded a glimpse at various points of the individual that resides underneath each and every key, the sum total of which opens doors to a magical chamber containing Ravi’s voice.  The range of both his tenor and soprano were so effortlessly conveyed, and with the purest joy and conviction.

The band continued with additional tracks from Spirit Fiction, and then unearthed another gem “Coincide”, taken from In Flux (Savoy). After giving thanks to a thoroughly satiated crowd, Ravi took command of the room one more time, positioning everyone on the edge of their seats with an encore that lasted more than twenty minutes.  We were treated to the John Coltrane classic, “Giant Steps”. The band literally redefined this epic piece, racing down a path that at first predictably suggested an infinite number of winding turns amidst intense harmonic development.  The note choices surrounding the theme emerged like fire flies assigned to a role of ubiquity, exposing new pathways that none of us could have before imagined traversing. From our seats we could hear a perfect acoustic balance between the on stage sound and the magnificent system at Jazz Alley, such that one could hear the ride cymbal hitting the surrounding walls gently, like sheets of rain streaking across pavement.  Ravi did his father’s masterpiece proud, and took plenty of time to stretch out with EJ right behind him, solid as ever at every turn. The final moments of the set were every bit as mesmerizing as the first, as a coda of cascading grooves layered and coalesced as a kind of musical baklava, actually quite reminiscent of an early rendition of Joe Henderson’s “Inner Urge”, which would once again briefly deliver us back to the inaugural Moving Pictures album.

Like his mother and father before him, Ravi Coltrane’s musical path gazes into the past and future simultaneously, with engaging albums that are meticulously constructed to mark a moment in time. While we can relive those moments, it’s the living work itself which possesses a unique and special vitality, producing a sound both ancient and modern, and bringing together people from all walks of life. For those who are attuned to the sound today, and for those who have yet to discover it, the real hope is to know what transpires will be music making at its best, and for many generations to come.

Not only is he a multi-media journalist, he is also an accomplished musician. He is the founder of SMI and drives the creative look, feel and branding for the publication. His years of writing, arranging, and performing live music in a variety of genres inform his ability to communicate the message and the mechanics of music. Roth’s work on SMI reflects his philosophy that music is the universal language, and builds community. He believes it has the power to unite people of every race, religion, gender, and persuasion.
Related ItemsDimitrious Jazz AlleyJazzJonathan SindelmanRavi ColtraneSeattle Live MusicSeattle Music Happenings
← Previous Story Seattle Living Room Show: The Good Hurt & Levi Weaver (Photo Slideshow)
Next Story → Seattle Living Room Show: Blake Noble, Impossible Bird & Luc and the Lovingtons (Photo Slide Show)