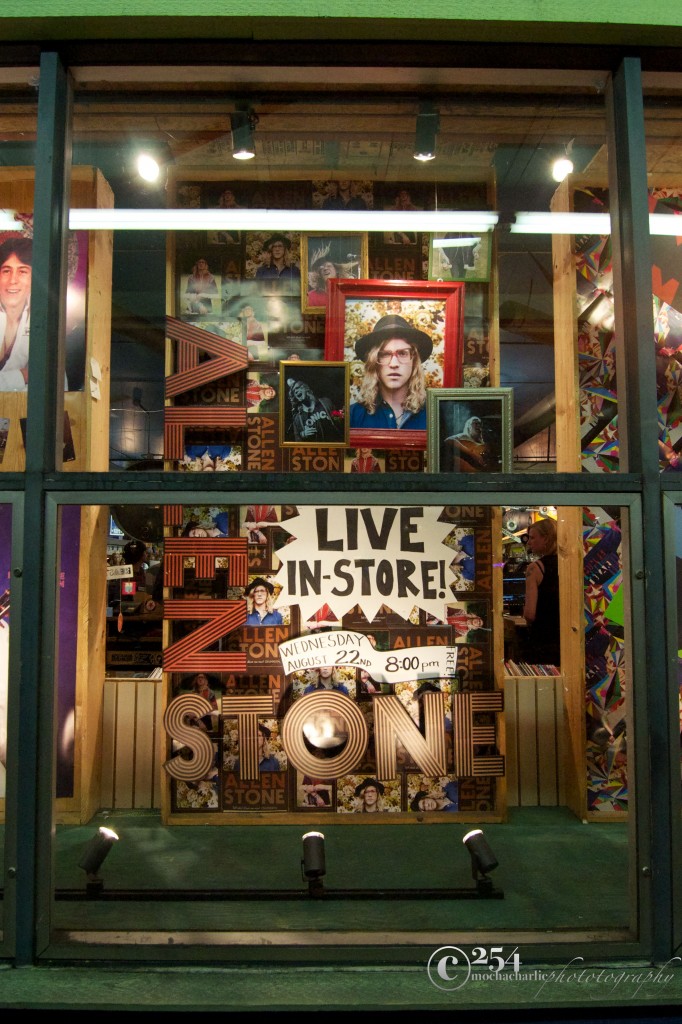 We ain’t gonna deny it, we here at SMI love us some Allen Stone. We dig authentic soul music, thoughtful lyrics, a tight groove, and catchy numbers that hit below the waist, only to go straight up to the heart. This, plus the fact that he’s one of the nicest cats in the business makes an Allen Stone show a must-see proposition.

Wednesday night in the heart of Queen Anne, fans lined up around the block outside Easy Street Records to welcome back a brilliant artist who’s making the Seattle music community very proud. A true road warrior, he’s barnstorming across the globe bringing his brand of blue-eyed soul to the masses. He was recently in town to play Capitol Hill Block Party (see link below) only to be on a plane to Delaware early the next morning. Immediately after that, it was up to the Big Apple to perform on Late Night With David Letterman.

Those who caught the (free!) concert were treated to heaping serving of songs from Stone and his dazzling backing band. Jet City Stream’s Marco Collins served as MC. Seattle Supersonic icon Shawn Kemp was also there and took time to pose for photos with fans. After the solid set, Stone stayed for autographs, and didn’t leave until every record was signed.

Stone’s next PNW performance will be a three-night stand at The Gorge, Labor Day weekend, opening for Dave Matthews Band. After that, Stone will head out to Charlotte, North Carolina, to do a show at the Democratic National Convention. (Yet another reason for digging Allen Stone!)

Earlier the same day, Stone appeared at an in-studio session with Shawn Stewart, which you can listen to here.

Not only is he a multi-media journalist, he is also an accomplished musician. He is the founder of SMI and drives the creative look, feel and branding for the publication. His years of writing, arranging, and performing live music in a variety of genres inform his ability to communicate the message and the mechanics of music. Roth’s work on SMI reflects his philosophy that music is the universal language, and builds community. He believes it has the power to unite people of every race, religion, gender, and persuasion.
Related ItemsAllen StoneEasy Street RecordsJet City StreamMocha CharlieNewsSeattle Music HappeningsShawn Stewart
← Previous Story Kristen Ward drops new single from forthcoming LP (Free Download)
Next Story → Festival Recap: People With Instruments makes dynamic debut (Photo Slideshow)