By Alicia Kamenick on October 4, 2012@corianderstem 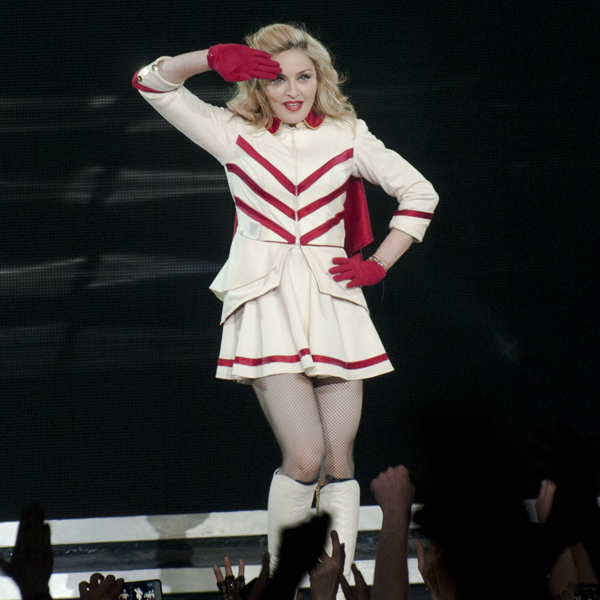 I spent a good chunk of yesterday trying to decide how I felt about Tuesday night’s Madonna concert at Key Arena.  It finally dawned on me that if I had to think about it that hard, I must have been a little disappointed.

In all fairness, it had little to do with the show itself, which was as big a spectacle and as good a performance as I’d expected. I mostly blame my ridiculously high expectations.  Having never seen her, before but absolutely loving the concert DVDs from her last two tours, I was ready to love this experience in person.  Maybe it was due to our seats being so high up in the arena. Or maybe it was because I’m not crazy about her new album, MDNA. And it sure didn’t help that I was increasingly tired throughout the show.

After a fun set from French DJ/producer Martin Solveig (who produced three tracks on MDNA), Madonna finally emerged at 10:30. Maybe I’m just old and crabby, but what kind of arena show starts that late?  Was she trying to add to the night’s dance club feel? I’m all for trying to create intimacy in an arena or stadium show, but if that’s what she was going for, we needed coffee vendors walking through the seating sections.  At least I’d known about the start time ahead of time, so I didn’t begin the night thinking she was pulling some Axl Rose-level diva act.

All right, personal whining over – on to the show!

The concert had about everything you’d expect from a Madonna show: religion, eroticism, stellar back-up dancers, a bit of shock value.  An exposed pair of butt cheeks (with an Obama shout-out written above them) wasn’t even the shocking bit.  That honor went to the violence of the opening few songs.

Madonna took the role of cat-suited criminal in the opening trio of songs (Girl Gone Wild, Revolver, Gang Bang), strutting around with a gun, gleefully offing her dancers as graphic, arty blood spatters exploded on the screen behind her.  They were startling scenes, and even though the next songs took her character down the road of repentance and redemption, it was hard to shake the impact of that jarring opening.

On a stage full of moving cubes, trap doors, and video walls, Madonna and her crew went on to give the expected eye-popping extravaganza throughout the show. Each set of songs was separated by a video interlude – from a collage of Madonna’s numerous incarnations flashing under snippets from her oodles of hits, to a striking array of scenes of unrest beneath Nobody Knows Me (from 2003’s underrated American Life album).

The set was heavy on the new songs, and while the fans on the floor went crazy for all of them, there were many in the nosebleeds who only really perked up for the hits. (Maybe they were all tired, too.)

The second grouping of songs was a welcome change from the heavy start, an upbeat string of songs.  Give Me All Your Luvin’ was a highlight, with Madonna and dancers in cheerleader outfits and a drumline suspended in midair.  Open Your Heart was given an impressive update, performed with a group of Basque musicians and featuring her 12-year-old son, Rocco, as a dancer.

Express Yourself was an early crowd favorite, especially as Madonna threw in a chorus of Lady Gaga’s Born This Way.  It was a perfect little wink and a nod to the “controversy” over the songs’ similarities, as the songs blended together seamlessly.  Unfortunately, that cheekiness turned to petulance when she started chanting “She’s not me!”  We know she’s not you, Madonna.  Don’t feel so threatened – you’re friggin’ Madonna, for Pete’s sake!

I was fully prepared to smirk and roll my eyes at the blatant “buy my movie!” promotion on the screens during Masterpiece, her Golden Globe-winning song from the movie W.E. (which she directed, and hey, it’s on sale on Blu-Ray and DVD at the merch stands!) But I didn’t, because the song was really quite lovely.

The final set included the aforementioned butt-cheek Obama shout-out – “When Obama gets his second term, I’ll take my pants all the way off!”  From there she sang a stripped-down (pun not quite intended – her pants were now back in place) version of Like a Virgin, slowed down to a cry of desperate need and accompanied by piano.

After a final string of new songs, she had the entire arena on their feet for an exuberant Like a Prayer, complete with gospel choir.  It was all-hands-on-deck for the dance party light show closer of Celebration, so at least she got our blood pumping for the 12:30 a.m. slog home.

It was a thrill to finally have seen this pop / rock icon, having been a fan from the start. I just wish I’d left feeling better about it. I suppose I can only blame myself for being an old fart who should have gone in better caffeinated.  Maybe when the inevitable concert DVD comes out, I’ll watch it and come to belatedly love it.  In the meantime, I think I’ll go watch the Confessions Tour DVD and have a Madonna disco bliss-out.

The Prayer Overture: Act of Contrition
Girl Gone Wild
Revolver
Gang Bang
Papa Don’t Preach
Hung Up
I Don’t Give A
Prophecy
Best Friend
Interlude
Express Yourself
Give Me All Your Luvin’
Turning Up the Hits
Turn Up the Radio
Open Your Heart
Masterpiece
Masculine/Feminine
Justify My Love
Interlude

Alicia is a Midwest transplant who loves Seattle but misses thunderstorms. Her musical obsessions began when her coolest aunt gave her a copy of K-Tel’s Rock 80 album for Christmas when she was 7. She spent many years studying piano and voice, but the force of rock and roll won, so while she still sings in a local chorale, her true musical passions lie more with The Beatles than with Beethoven. When she’s not working at her job in HR, she can be found singing bad pop songs at the top of her lungs … although sometimes she does that
Related ItemsKey ArenaMadonnaMichael ProfittSeattle Live MusicSeattle Music Happenings
← Previous Story SMI Radio Ep. 68 On Demand: Impossible Bird and Eclectic Approach
Next Story → Live Review: Glen Hansard takes it to the streets of Seattle