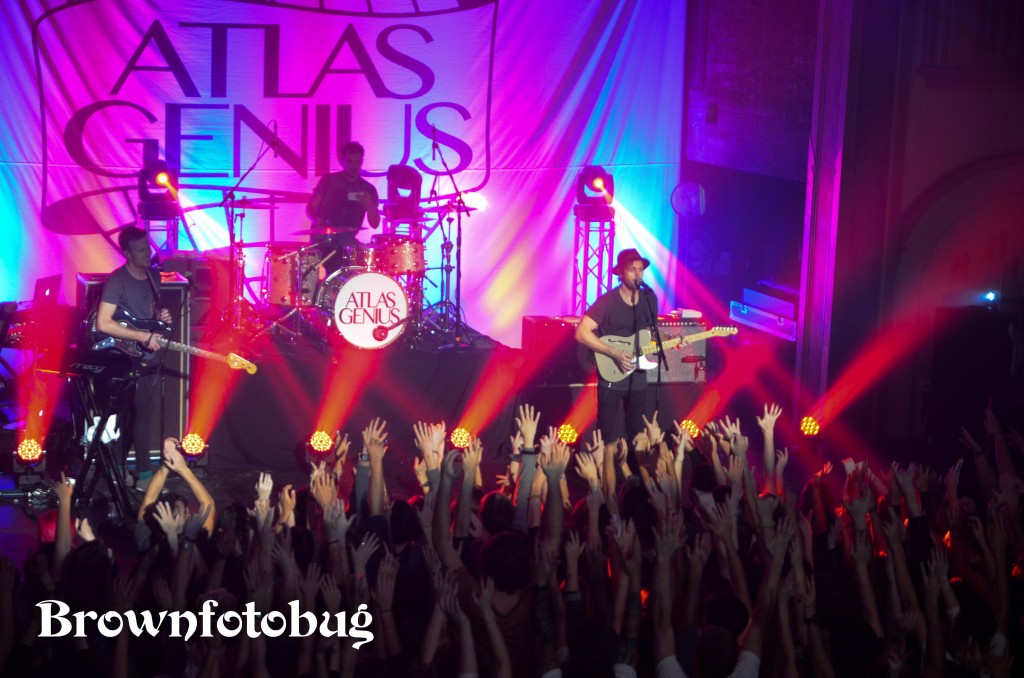 Atlas Genius at The Neptune (Photo by Arlene Brown)

I once ordered a triple shot espresso from a coffee stand.  Normally, I go decaf.  But I thought “wouldn’t it be neat to see what happens?”  Let me tell ya, I was so hyped up, I couldn’t sleep for two days.  That’s how I felt after rockin’ out at The Neptune on Monday Nov 11th to the “Ones To Watch” tour including Dale Earnhardt Jr Jr, Family of the Year, and Atlas Genius. They left everyone jazzed, hyped, blown away and wanting more.

Lucky for us, opening band and Detroit natives, Dale Earnhardt Jr Jr, announced that they will be back in Seattle in March as part of their first ever headlining tour!  Their short, six song set was spot on.  They included their current release “If You Didn’t See Me (Then You Weren’t On The Dancefloor)” from their new album “The Speed of Things” and an older single “We Almost Lost Detroit.”   Daniel Zott and Joshua Epstein definitely had fun on and OFF the stage.  They were dancing, jumping, and grooving in the crowd.  Yes, I said IN the crowd.  We couldn’t get enough of these guys.  I can not wait to see them again very soon!!

Family of the Year.  These LA based cats keep getting better and better every single time I see them.  And who wouldn’t want to go see these guys again and again?  They’re fresh, fun, and hey…they’re family!  Well, not all of them are family, but drummer, Sebastian Keefe and front man, Joe Keefe, are brothers.   Joining them on stage were the beautiful Christina Schroeter singing and playing keyboard, James Buckey on guitar.

Oh, and did I mention that not only did they play the most beautiful mostly acoustic and part accapella (with the help of the crowd) rendition of “Hero,” they were joined on stage by Dale Earnhardt Jr Jr for a no holds bar jam session.  Truly “you HAD to be there” moments.  Much love and respect was shared by both bands for each other and their adoring fans as they have finished touring together for the last couple of months.  FOTY is off on a European tour and will briefly join up again with Atlas Genius.  Check out their current album Loma Vista.

And speaking of Atlas Genius, when the lights came up for the headliner of the night, the crowd was literally in a frenzy of excitement!  The light show was definitely enhanced by the music.  Or was the music enhanced by the lights?  Either way, it was spectacular!!  “If So” has never sounded better.  Keith Jeffrey, Michael Jeffrey, Steven Jeffrey (yes, all brothers,) and Darren Sell have never looked better.

Ending the “Ones To Watch” tour here in Seattle was definitely fitting as all three bands saved their best for last.  Granted, Atlas Genius is off to Europe to tour with Imagine Dragons.  Family of the Year is also doing a quick European tour.  And Dale Earnhardt Jr Jr is gearing up for their own headlining tour.  I’ll definitely keep my eyes and ears on these three bands.  I’ll keep to my decaf coffee, but will remember that mixing these three bands will keep me up for days!

Not only is he a multi-media journalist, he is also an accomplished musician. He is the founder of SMI and drives the creative look, feel and branding for the publication. His years of writing, arranging, and performing live music in a variety of genres inform his ability to communicate the message and the mechanics of music. Roth’s work on SMI reflects his philosophy that music is the universal language, and builds community. He believes it has the power to unite people of every race, religion, gender, and persuasion.
Related ItemsArlene BrownAtlas GeniusDale Earnhardt Jr.Family of the YearSeattle Music HappeningsThe Neptune
← Previous Story Live Music Preview: Atlas Genius, Family of the Year, & Dale Earnhardt Jr. @ The Neptune 11/11/2013
Next Story → Surfs Up! Switchfoot Makes a Huge Splash At Yakima’s Capitol Theatre (PHOTOS)