The Fall of Troy Resurrected at Showbox (Photo Slideshow) 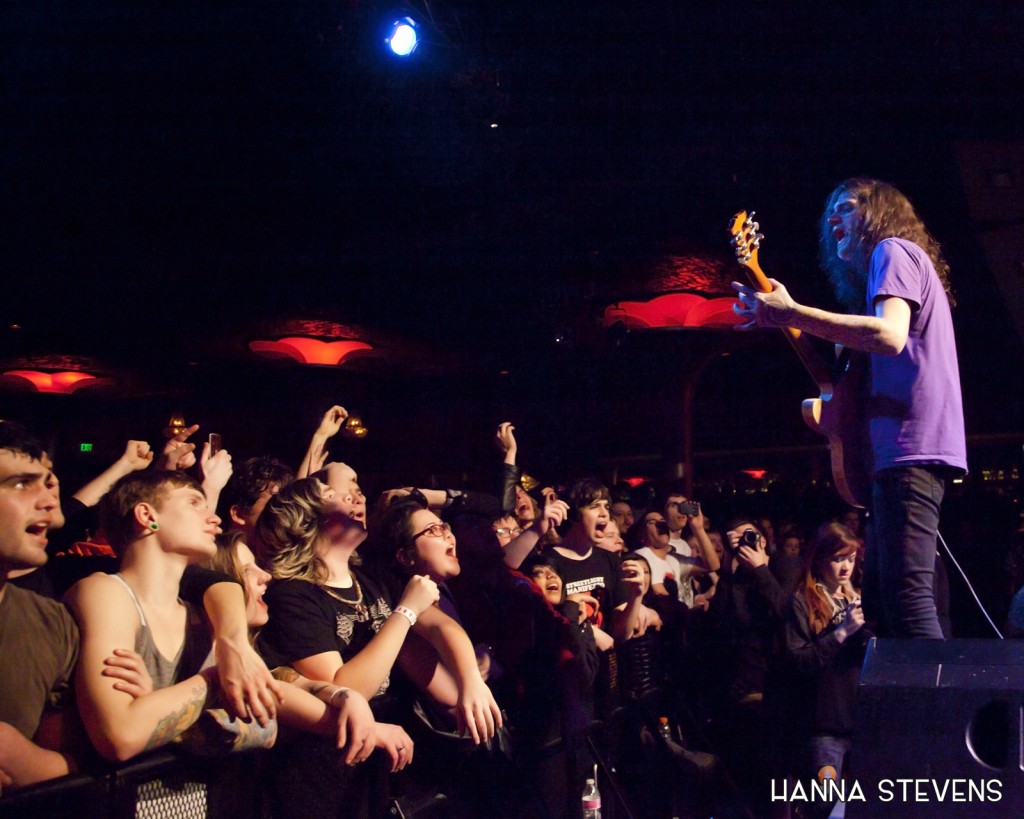 After a three year hiatus, Seattle post-“mathcore” band  The Fall of Troy stood back up and played nearly two hours to a packed house at the Showbox Market last Saturday. The Fall of Troy is known for their unconventional bar structure, technical lines and rhythms, intricate finger tapping, and two-man vocal screams and singing.

Seattle pride infiltrated the evening, from drummer Andrew Forsman’s Seahawks #12 jersey, to guitar and lead vocalist Thomas Erak’s introduction to “Seattlantis,” their song about Seattle sinking into the sea.

“We’ll never forget this night as long as we live,” Erak said.

The crowd probably won’t, either. Fans sang and screamed, chanted for the song FCPREMIX, and crowd surfed, frequently being dumped onto the security staff in front of the stage barrier.

Before the show, fans could be overheard discussing how long they had been fans of the band, adding to the significance of the band’s reunion. Erak began playing with Forsman and bassist Tim Ward in their early high school years. While Frank Ene played bass from 2007 until the band’s breakup in 2010, Ward is now back, completing the original lineup.

The Fall of Troy played three reunion shows in Austin, Texas last December, each show featuring a different album from their discography. The trio will release a new album this year. Now, fully independent, they are working with fans for art, booking, and promotions. They are staying true to the foundations of their sound, too.

And that’s all they need. The Fall of Troy’s performance was explosive. Or “Xxplosive,” as Thomas Erak quoted the guitar riff from the iconic Dr. Dre song, the same song came on with the house lights at the end of the show. West coast shit indeed.

Four-piece rock band Sailor Mouth from Ballard opened the show. They will release their second record and tour the west coast this spring. They brought out the hometown spirit, questioning with awe:  “the Seahawks and The Fall of Troy?”

Metal duo Tacos! followed, filling the stage with big sound and big hair, their performance somehow both nonchalant and energetic. That night the Showbox Market struck a balance between fun and ferocity, leaving fans in anticipation of new records and more shows from all three bands.

Hanna Stevens is a musician and photographer from Indianola, WA who now lives, works, and plays in Seattle. Music and photography create the framework for Hanna’s life. Her intention is to create community through music and art, and she is thankful for the chance to do so for SMI.
Related ItemsHanna StevensSeattle Music HappeningsShowbox at the MarketThe Fall of Troy
← Previous Story Two Nights of The Head and The Heart at The Paramount (Photo Slideshow)
Next Story → Throwing Muses: Together Again At The Triple Door (Photo Slideshow)