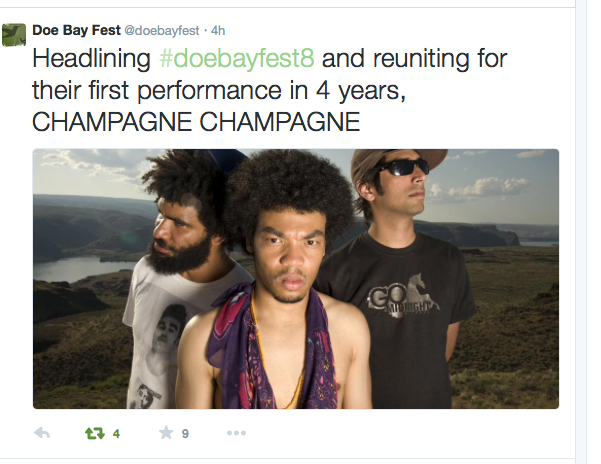 The good folks at Artist Home announced the complete line up for Doe Bay Fest last night in a most unconventional fashion. They didn’t do it via a press release or launch party. They chose to take to Facebook and Twitter.

Starting at 6:00pm PST, Doe Bay Fest took to Twitter to announce each artist participating in the Festival’s eighth year starting off with the announcement of Issac Pierce and then tweeting each artist announcement throughout the evening. The lineup announcement culminated several hours later with the pleasantly surprising reveal of the reunion of the critically acclaimed indie, hip hop / rock outfit, Champagne Champagne, who will return after a four year absence.

The “tweetfest” also provided some other great announcements, like Lee Fields and the Expressions headlining Friday night along with some other brilliant acts like Artist Home mainstays, Hobosexual, who played the first annual Timber! Outdoor Music Festival in 2013. In addition, Doe Bay Fest 2015 will bring you, Bryan John Appleby, Daniel Blue, Bi Bhiman, Motopony, Kris Orlowski, The Local Stangers, Thunder Pussy, Polyrhythmics and a lot more.

For ticket information and the complete lineup, please visit http://www.doebayfest.com

Not only is he a multi-media journalist, he is also an accomplished musician. He is the founder of SMI and drives the creative look, feel and branding for the publication. His years of writing, arranging, and performing live music in a variety of genres inform his ability to communicate the message and the mechanics of music. Roth’s work on SMI reflects his philosophy that music is the universal language, and builds community. He believes it has the power to unite people of every race, religion, gender, and persuasion.
Related ItemsArtist HomeBiBhimanBryan John ApplebyChampagne ChampagneDaniel BlueDoe Bay FestFeatureFestivalsGreg RothHobosexualIssac PierceKris OrlowskiLee Fields and The ExpressionsMotoponyNewsPolyrhythmicsThe Local StrangersThunder PussyTimber! Outdoor Music Festval
← Previous Story SMI Radio Ep. 109 On Demand: Chinook Fest Special with Cody Beebe & Austin Jenckes
Next Story → It Was a Wilde Night at Barboza!