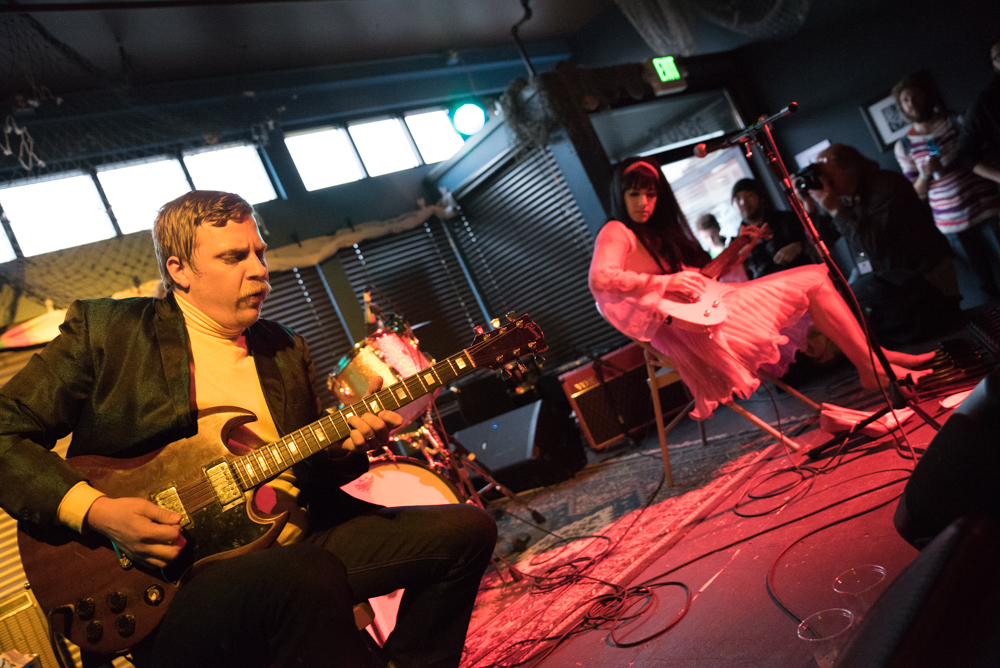 To the uninitiated masses who drove the half hour north from Seattle to attend the Fisherman’s Village Music Festival, Everett seemed like a sort of wonderland. Throughout the weekend, people repeatedly marveled at the ample, free street parking, wide, clean sidewalks decorated with a sculpture on every corner, and the various types of music venues. From the gorgeous Historic Everett Theater to The Cannery, Everett’s newest live music space, the town has much to offer on many levels, and Fisherman’s Village (put on by the Everett Music Initiative) was the perfect way to showcase the area’s burgeoning scene.

The festival started off with a Friday night of dueling venues, with bands performing at both The Cannery and local dive bar Tony V’s just around the corner. Rising stars The Mama Rags’ seventies-tinged, Marshall stacks-worthy songs permeated the walls of The Cannery for the second time in a month, while Portland’s Tango Alpha Tango brought searing guitar solos and on-stage acrobatics to the table. Over at Tony V’s, The Pro-Nouns augmented their more straight-ahead rock songs with a hard-edged reggae attack on racial police violence. Lucky Boys had a punk sound; although it appeared that the band members have been raging against the machine for quite some time, that didn’t stop the lead singer from getting up onto the bar and screaming her lungs out.

Saturday saw the heaviest attendance at the festival, and it was easy to see why: festival planners Steven Graham and Ryan Crowther had curated a lineup that spanned several genres (it was bandied on social media that FVMF had the best lineup of any local festival of the summer), pairing up with Seattle Living Room Shows for a series of mainstage showcases that were truly amazing – from up and coming Seattle bands Ruler (a favorite of festival emcee Marco Collins) and Maiah Manser, to local favorites such as Ravenna Woods, Cataldo, SISTERS, and Deep Sea Diver. Meanwhile, various other stages spanned the folkier gamut (Planes On Paper topping this list) to retro (Prom Queen) and hip hop. Everett-based bands were well represented on the smaller stages and impressed festival goers from down south. John Paul and The Apostles was a great example of this. They bulled through a blistering set of grunge-tastic tunes late Saturday night at Tony V’s, surrounded by friends from other Everett bands and various festival attendees. Everett’s own Fauna Shade closed out the night at The Cannery, starting their set at 12:30 a.m. and rocking the entire downtown area. It’s normally a pretty quiet place.

The mood on Sunday was more relaxed, even though there were nearly as many performances as Saturday. Things started off with Born of Ghosts at The Cannery, and they didn’t seem to care that their set started at noon, as they put on an energetic performance for those still groggy from the night before. Shark The Herald was next, and as people filtered in they were noticeably favorably surprised. Everett’s secrets are out – there is a lot of talent in this town. Jherek Bischoff’s off-kilter classical set was a mid-day highlight and a relaxing rest stop during the warm, sunny day, and Brent Coles (formerly of You, Me, and Apollo) stunned everyone in the Historic Everett Theater with his incredible, intense voice and guitar. Meanwhile, The Cannery was getting gritty with Gibraltar and later, My Goodness, which drew a packed crowd that definitely preferred the loud to the delicate. Back over at the Theater, the night closed with local darling Jason Webley and his reconstituted-after-five-years band. Webley amassed a crowd of his own with his over the top stage antics and theatrical storytelling songs. But the true ending to Fisherman’s Village Music Festival belonged to Johnny Hoffman and The Residents, affectionately nicknamed the “black sheep” of the Everett music community by loving friends. Shark The Herald frontman Kirk Rutherford came on stage for one song and traded between dancing like a madman and bellowing unintelligibly into the microphone, and it fit in perfectly. Hoffman ended the set bent over completely backwards on the floor with his shoes practically in his armpits. Everett is unto its own.

Who knows what next year will bring? As one musician from an Everett-based band said, “next year we want to get on that main stage.” With the way things are going, it just might happen.

Christine Mitchell has been poring over album liner notes pretty much since she acquired the skill of reading, and figured out the basic structure of rock songs at an early age. Whether it’s the needle popping into the first groove of the record, the beeps that signal the beginning (or end) of a cassette tape, or digital numbers ticking off the seconds from zero, music brings Christine happiness, ponderous thought, opportunities for almost scientific study, and sometimes a few tears. When she started attending live shows two decades ago, a whole new piece of the puzzle clicked in and she has been hooked ever since.
Related ItemsBorn Of Ghostsbrent colesCataldoChristine MitchellDeep Sea DiverEverett Music InitiativeFauna ShadeFeatureFestivalFestivalsFisherman's Village Music FestivalGibraltarhistoric everett theaterjason webleyjherek bischoffJohn Paul and The ApostlesJohnny Hoffman and The ResidentsKirk Rutherfordlucky boysMaiah ManserMarco CollinsMy GoodnessPlanes on PaperProm QueenRavenna WoodsRulerRyan CrowtherSeattle Living Room ShowsShark The HeraldSISTERSstephen grahamTango Alpha TangoThe CanneryThe Mama RagsThe Pro-Nounstony v'sYou Me & Apollo
← Previous Story Wild times at The Sunset with Bob Log III
Next Story → BIG BLDG BASH: on the right side of the tracks