By Robin Fairbanks on October 29, 2015@robinfairbanks 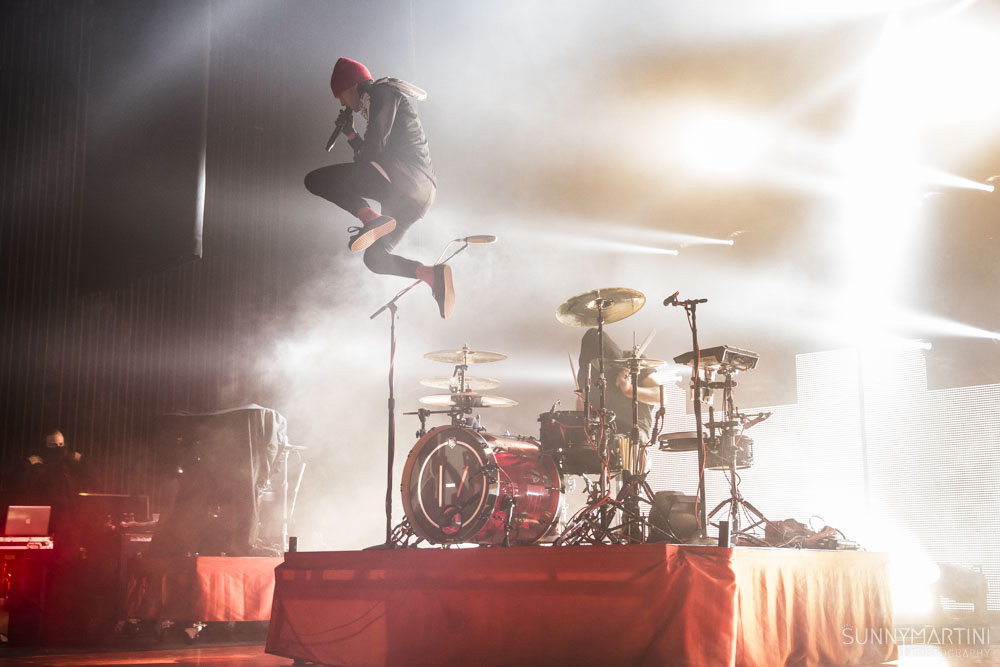 Ohio-based twenty one pilots‘ performance at the 2014 MTV Video Awards catapulted the band to national attention. Fast forward to a year later, and the duo’s Blurryface Tour has been selling out across the country.

The band rolled into Seattle’s Paramount Theatre on October 22, delivering a well-crafted show that could rival any seasoned national act. Full of short vignettes, the show’s movement was a well-oiled machine. Singer/multi-instrumentalist Tyler Joseph, and drummer Josh Dun, appeared in masked faces to the frenetic “Heavy Dirty Soul.” Joseph’s lyrics are thought-provoking and dark, and speak of pain, fear, choice, and consequence. Joseph plays the part of poet and tortured genius well. He exposes his innermost fears, pain, and humanity, and it’s resonating globally. Teenagers have flocked to this band, identifying with its less than comfortable topics and feelings.

During the fan-favorite piano song “Goner,” the room was silent, with all eyes and ears on Joseph. Flying birds filled the screen behind him, enhancing the song’s message of hope and death, although the latter isn’t explicitly stated. Joseph pleaded (repeating each line twice), “I’m a goner somebody catch my breath. I want to be known by you. I’ve got two faces, Blurry is the one I’m not. I need your help to take him out . . . Don’t let me be gone,” then launched into a final scream. Blurryface is a character manifested from Joseph’s insecurities, fears, and stress of growing up and wishing he could go back to being a child. Joseph has stated that the black coloring he rubs on his neck and hands represent a feeling of suffocation (neck) and insecurities about what he creates with his hands, and that wearing the paint helps him get into the character. When he does, he ramps up to a psychotic frenzy. But all is not dark and brooding with twenty one pilots. Like yin and yang, the duo jumped from “Goner,” to the pop anthem “Tear In My Heart,” with their live performance three days later on the MTV EMA’s, bringing worldwide accolades and predictions that Blurryface will be one of the top selling albums of 2015.

A sweet moment took place when Joseph broke out his ukulele to play Elvis Presley’s “Can’t Help Falling In Love,” and the whole room happily sang along. Little vignettes like that helped to shift things from heavy subject matter to lighthearted drum-off battles. Equal time was given to drummer Dun during the battles and his solos, and showcased those mighty guns that provide the heavy hits. His drumming style was hard hitting, but he drummed with such joy that when not wearing his Blurryface mask, he rarely quit smiling.

The band will launch their Emotional Roadshow Summer World Tour on May 31 in Cincinnati, Ohio. Luckily for Seattle, they’ll be playing 107.7 The End’s Deck the Hall Ball on December 8 at KeyArena. It’s a safe bet that twenty one pilots will be the belle of the Ball.

Echosmith provided poppy support, having had quite a year of their own, this being their biggest tour to date. There’s nothing like harmonies that are genetically engineered, and singer Sydney Sierota and siblings Jamie, Noah, and Graham have seen recent success with pop anthems such as “Cool Kids” and “Bright,” which filled up the room with “Ooooh la la laas” from loyal fans. Their songs are radio-friendly hits; this foursome will continue to take off as bigger tours come calling. Watch their new video: Let’s Love.

Bay Area opener Finish Ticket is no stranger to Seattle, although this is the biggest venue they’ve played here to date. They opened strong with a passionate performance, gaining new fans with soaring vocals by lead singer Brendan Hoye and arena-worthy guitar by Alex DiDonato. Although a young act, the two sets of brothers have been working hard since 2008. They’ve headlined their own sold out shows at The Great American Music Hall, The Fillmore, and Slim’s, which got the attention of major labels (they inked a deal with Atlantic in 2013). Their new five-song EP, When Night Becomes Day, is out and available on iTunes, with more touring to come in the next year.

Robin Fairbanks has spent 30+ years in the Music Industry in many capacities. Working in the Seattle music scene since 2006 as a Manager/Booker, she’s known for her ethics and artist development skills. Robin has guided the careers of many, but most notable as the former Manager of Seattle Garage/Blues band Fox and The Law for 3.5 years. Robin has spent the last 2 yrs consulting with Artists who seek her help as a Music Consultant and Publicist with Setlist Music Solutions LLC. She also gives of her time as an advisor to Seattle Wave Radio, an Internet music station where she helped shape its sound as the ROCK Channel Music Director for 2+ yrs upon its launch in 2010 and where you’ll find her music blog, “Bird On A Wire“. In 2014, Robin also worked as a Contributing Music Writer for Guerrilla Candy.
Related ItemsEchosmithFeatureFinish TicketParamount TheatreRobin FairbanksSunita MartiniTwenty One Pilots
← Previous Story Lianne La Havas Wows at The Neptune
Next Story → Joan Armatrading Says Farewell