Home / Artist Spotlight / Fox and the Law Tags Out; Acid Tongue Keeps On

Fox and the Law Tags Out; Acid Tongue Keeps On

By Christine Mitchell on March 14, 2016@Housetornado37 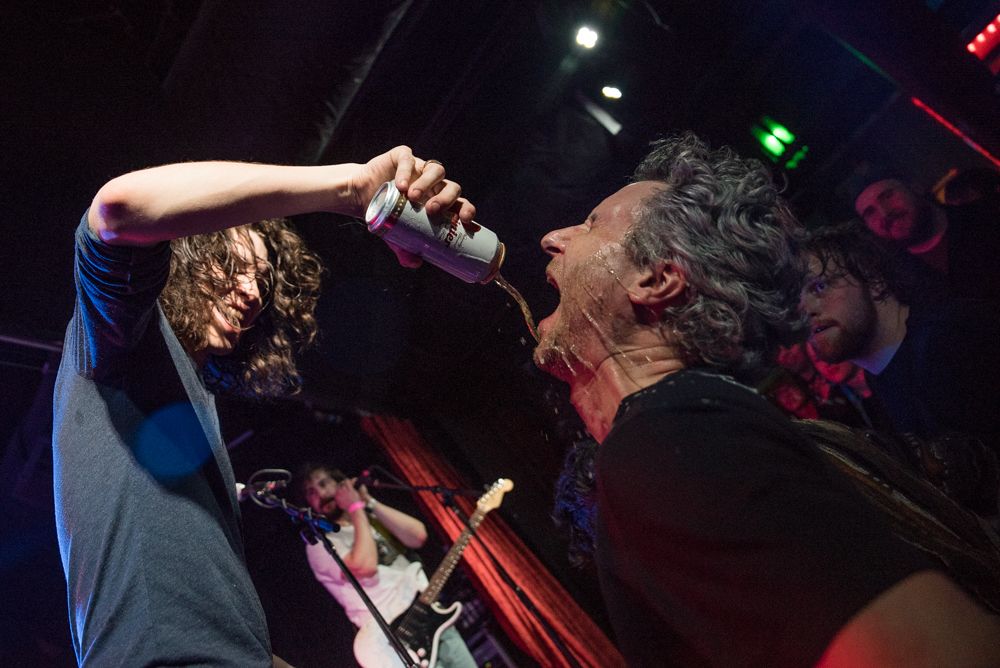 Fox and the Law at Chop Suey (Photo: Christine Mitchell)

Fox and the Law ended their band in the best way possible: rocking out explosively amidst showers of beer at Chop Suey. The quartet’s final set was the culmination of two shows held on Fridays a week apart, titled the Lover’s/Hater’s Ball and presented by Freakout Records. Lead singer Guy Keltner’s newer, trippier outfit Acid Tongue had played the Friday before at Lover’s Ball, highlighting the transition from the old to the new (Photos from Lover’s Ball can be viewed below). According to the fans present, there was nothing wrong with the old dog at all, and their performance only served to reinforce the chest-slamming power of Fox and the Law.

The setlist was career-spanning and filled with feedback from the get-go. Their most recent tracks shined; “Dirty Hands” and “Bad Motivator” (off of 2015’s The Trouble With People) were angular, fuzzed-out, and seemed to drive the band members into a frenzy. Drummer Daniel O’Neil was comparatively the most chill as he bashed and crashed in the background, while bassist Patrick Dougherty notched a bit higher on the thrashing scale, his hair fluffed and flying around him like a stormy sea. Keltner jumped and squatted and stood on tiptoe as he alternated between hurling lyrics at the crowd and becoming lost in crunching guitar licks with his bandmates. But lead guitarist Peter Williams simply took the cake, tongue hanging out of his mouth or not, his face scrunching and stretching as he summoned solos…and then suddenly taking on the face of a sweet child as he interacted with fans and called out his mother (it was her birthday).

It must be pointed out that there was an incredible amount of shenanigans going on with alcohol during Fox and the Law’s set. It was the least dry wake ever. A bottle of Jameson’s whiskey (who sponsored the event) was placed front and center on the stage, along with six packs of Rainier and various other drinks. Partway through the show, Keltner’s Acid Tongue bandmate and Freakout Records cohort Ian Cunningham and another friend came onstage to pour beer over the band members and shake the dregs out over the crowd. The stage was completely doused and became very slippery. Williams slipped in his boots and fell on his ass. Keltner sloppily poured more beer into fans’ mouths. Shoes and socks came off onstage, and the band rocked on, playing a sludgey cover of The Cars’ “Let The Good Times Roll.” By the end of the night, Fox and the Law had played for nearly two hours. It seemed that they were perhaps not ready to quit, either. But so it goes.

Fox and the Law was supported by three very good bands, starting off with Kevin Nichols, formerly of California-based Your Ugly Sister and now working under the name Chief Deceiver. Nichols started things off right, wearing no pants but sporting a khaki jacket that lasted about half of the set. After that it was strictly shoes, socks and boxer briefs topped with a head of hair that went everywhere. And the music? It was rocking and great. It’s nice to have Nichols back in town.

A Townsmen Echo was well received by the crowd, but brought the general tempo of the night down a couple of notches with their dreamy, psychedelic tunes. Hand of the Hills corrected this like defibrillator pads to the chest – their pounding, swampish music filled with slide guitar pumped at high volume. All three bands served to amp the crowd up for Fox and the Law’s inevitable yet incredible swan song. It’s hard to believe it was the last time.

Christine Mitchell has been poring over album liner notes pretty much since she acquired the skill of reading, and figured out the basic structure of rock songs at an early age. Whether it’s the needle popping into the first groove of the record, the beeps that signal the beginning (or end) of a cassette tape, or digital numbers ticking off the seconds from zero, music brings Christine happiness, ponderous thought, opportunities for almost scientific study, and sometimes a few tears. When she started attending live shows two decades ago, a whole new piece of the puzzle clicked in and she has been hooked ever since.
Related ItemsA Townsmen EchoAcid TongueAlex CrickBread and ButterChristine MitchellFeatureFox and The LawFreakout RecordsGuantanamo BaywatchHand of The HillsJake HansonKevin NicholsStallionYour Ugly Sister
← Previous Story SMI Radio XTRA: Adrian Belew talks about working with David Bowie
Next Story → Cafe Nordo – one the hottest tickets in town. (part 1)