Cafe Nordo – one the hottest tickets in town. (part 1) 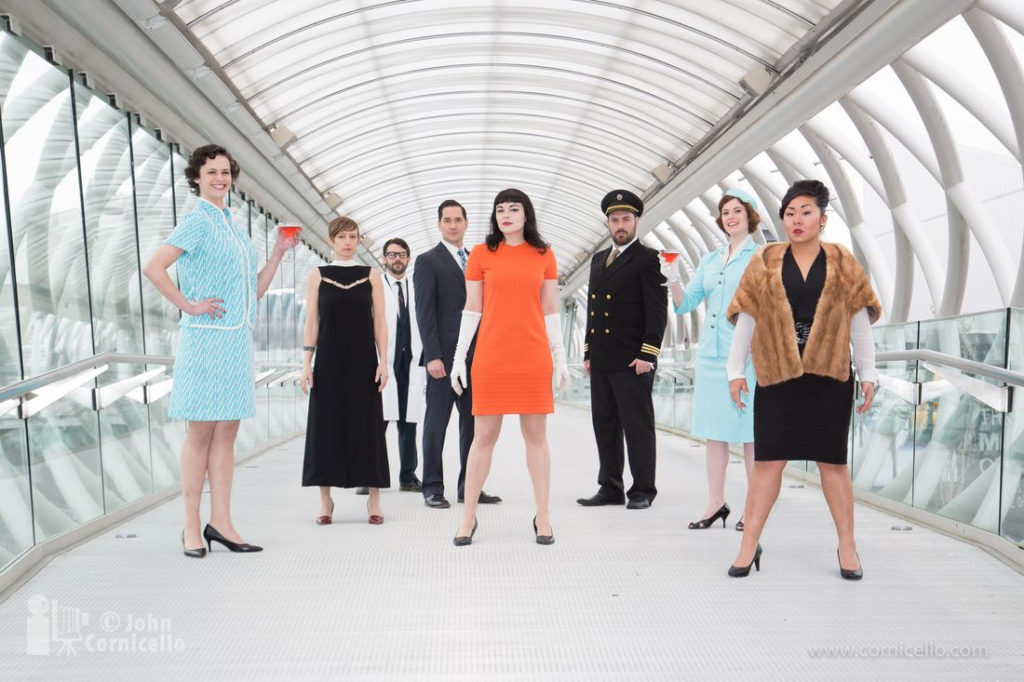 If it’s one thing the crowds at a Cafe Nordo production can expect it’s sore sides from laughter. Their latest production, To Savor Tomorrow, is a hysterical romp: equal parts dinner theater, comedy ensemble and 60’s spy shlock-inspired musical.

To Savor Tomorrow is set aboard a jet liner during the Cold War. German Dr. Peter Proudhurst is harboring secret plans of his latest invention, genetically-modified fast food, which the United States is trying to keep out of Russia and China’s hands. The only problem is that the American spy assigned to protect the inventor, Bob Trippe, is a bumbling moron-who-might-also-be-a-savant-but-still-is-a-moron. A moron with luck on his side. He needs all the help he can muster against two communists spies, femme-fatale Russian Svetlana Romanova and the deadly operative Jiang Ping. An assortment of allies and foes – rookie spies and airline staff – make up the zany supporting cast.

The results make for one of most madcap spectacles Seattle locals will see this year. The humor is sharp, racy and as it is era-specific, unconcerned with current norms of political correctness. Irreverent and culturally-charged jokes are fired between the cast members to great effect, often erupting howls of laughter from the audience. The production is also immersive as each actor/actress also double as the waitstaff, serving theater-goers a coursed chef-prepared meal during the intermissions. The cocktail lounge-era jazz, expertly composed by Annastasia Workman, is the perfect backdrop for this sort of heavily stylized farce, groovy and sensual.

The admission price ($90 with cocktail flight) is also more than fair considering patrons are the ‘airline passengers’ receiving a four course meal, four specially-paired cocktails plus a show where they co-mingle with the actors, all included in one ticket. Where else can one get a coursed dinner, a cocktail flight, with comedic theater plus mingle with the cast for less than a hundred dollars?

This is not lazy diner-fare either; the Painted Hills sirloin tip was cooked to order quite nicely – tender and flavorful. The Chinese black tea noodle dish with crab and pork consomme exploded with flavors that meshed well together. Yet the highlight of the night was the ‘Helluva Town’ cocktail. Not all bourbon-based cocktails are created equal; it can be a tricky spirit to mix and easily atrocious when mixed by novice hands. Not so with the ‘Helluva’; it’s an herbaceous yet mildly sweet elixir, igniting the pleasure centers in my brain, firing off warm swaths of serotonin throughout my synapses.

The show is currently running at the historic Pioneer Square neighborhood through June 11th. Tickets tend to sell out each week so order fast.

You can purchase tickets to this fantastic show here.

Carradin Michel is a Seattle native who spent his youth constantly stealing his older brother's Maxell cassettes, all dubbed with rap music from LA and New York. Those early tapes, along with a weekly soundtrack provided by Nasty Ness's Rap Attack radio show, caused him to fall hard for Hip Hop music and it's culture. He believes the Pacific Northwest has one of the freshest hiphop scenes in the world and wants to shine a brighter spotlight on it by documenting it's rich talent.
Related Itemsannastasia workmancafe nordoCarradin MichelFeaturepart onept 1SeattleSeattle Music InsiderSMIto savor tomorrow
← Previous Story Another Hot Dance Party With Mayer Hawthorne
Next Story → Be Still Your Broken Emo Hearts: Blaqk Audio At The Crocodile