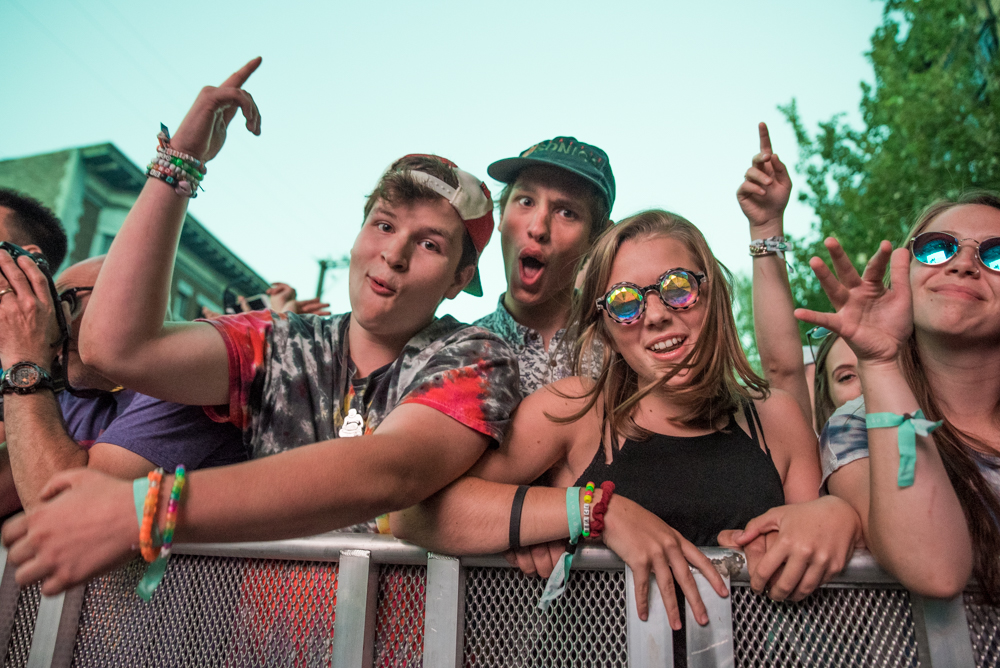 Capitol Hill Block Party hit its stride on Saturday. The humidity of the previous day burned off, making for a gorgeous summer afternoon and evening. People were ready to party.

It was easy to pinpoint the moment when the festival truly got going: Down North’s explosive set at Neumos early in the afternoon. Their incredibly well-executed blend of rock and soul was powerful and nothing short of amazing. Add the stage presence and voice of one Anthony “RenaGade” Briscoe, and there it was: one of the best performances of CHBP this year. Briscoe danced with his microphone stand, he danced all over the stage, and he danced off the stage, all through the crowd. Perfection.

Thunderpussy took the rock and blues baton from there with a set performed to a crowd that stretched as far as the eye could see. It felt like every person who was in town and had heard the band’s name uttered was present, and it warmed the heart to see the following that has amassed due to simple word of mouth. The band trotted out a couple of new songs that satisfyingly deepen the breadth of their catalog: Molly Sides, Whitney Petty, Leah Julius, and Ruby Dunphy are busy creating tunes with staying power. Oh, and don’t worry. The performance side was meaty as well, featuring Whitney staring at Molly’s crotch for far longer than decency and decorum permit, and there was a high kicking chorus line. Also: fuck math. And: debut album in the works this fall (you can help!).

Saturday was full of emphatic performances, with Duke Evers’ being no exception. Joshua Starkel oozes the cute from all of his pores, and when you add a fluffy fur coat and sunglasses, it just compounds. That pouty Elvis lip, those wagging hips: OH COME ON. But just wait until he starts melting off your face via his guitar and passionate vocals. New-ish bassist Dune Butler had some hair-thrashing moves that paired well with his stripey bellbottoms and paisley shirt. Meanwhile, Kyle Veazey holds the title for World’s Most Happy-Smiley Drummer. Also: a debut album in the fall. Seattle will soon be basking in great new music.

The fans of Big Wild seemed bigger than Big Wild himself, but off to the side of the main stage in Neumos, hardcore fans of The Grizzled Mighty crammed the venue, head-banging as Ryan Granger’s gritty blues held them in thrall. Faustine Hudson held her own on the drums; the duo’s synergy surging every time their eyes met.

The evening was anchored with a packed performance by locals-gone-national EDM faves ODESZA (see our in-depth article here). CatacombKid and BeachesBeaches played emphatically to a crowd more than willing to receive them. It was a party-worthy end to a gorgeous Seattle summer day, and Capitol Hill Block Party was the best place to spend it.

Christine Mitchell has been poring over album liner notes pretty much since she acquired the skill of reading, and figured out the basic structure of rock songs at an early age. Whether it’s the needle popping into the first groove of the record, the beeps that signal the beginning (or end) of a cassette tape, or digital numbers ticking off the seconds from zero, music brings Christine happiness, ponderous thought, opportunities for almost scientific study, and sometimes a few tears. When she started attending live shows two decades ago, a whole new piece of the puzzle clicked in and she has been hooked ever since.
Related ItemsBig WildCapitol Hill Block PartyCar Seat HeadrestCHBPChristine MitchellDown NorthDuke EversFeatureGreat Good Fine OKIsrael NashJake HansonOdeszaPorter RayPrism TatsPure Bathing CultureTangerineThe Grizzled MightyThunderpussy
← Previous Story ODESZA at Capitol Hill Block Party
Next Story → Otep Brings “Equal Rights, Equal Lefts” Tour to Studio 7