By Christine Mitchell on September 21, 2016@Housetornado37 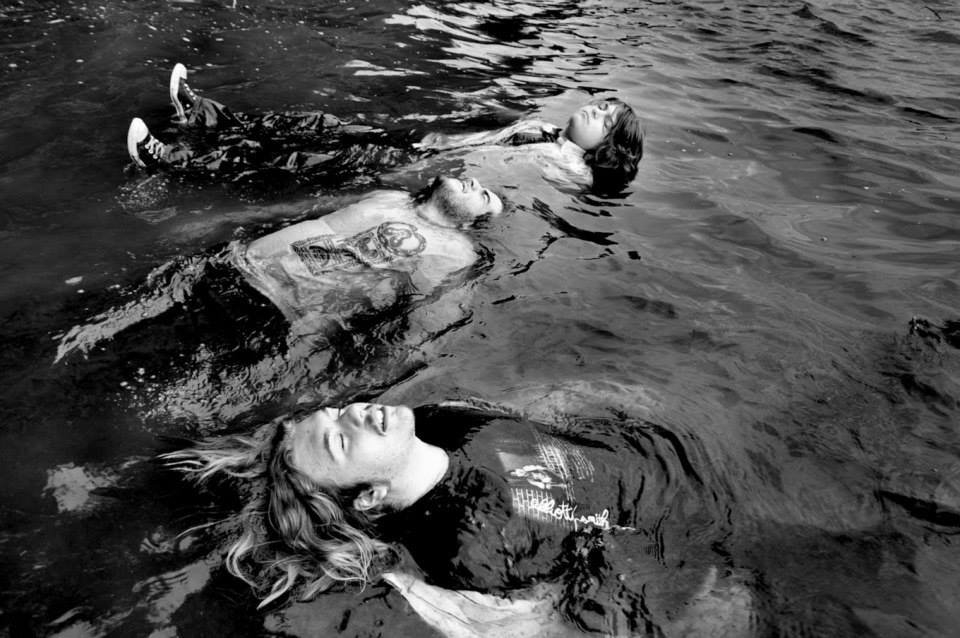 Asterhouse’s debut video for “Sweet Fragile World,” which is one of two tracks the band contributed to the split LP Four Corners, features delicate dancing paired with imagery of decay and rock ‘n’ roll. The Kenmore-based trio treads paths both maudlin and head-banging on this mid-tempo burner, which combines just the right amount of pop sheen to its hard rocking core.

Lead guitarist Russ Thornburg (unsuccessfully and dementedly) chows down on roses before getting down to business on a shredding, metal solo mid-song. Meanwhile, singer and drummer John Thornburg finger-paints his face white while wearing a black suit, pleading to the camera. Bassist Julio Posada lurks in the shadows under the cover of a large knit hat a la Slash, if Slash wore galoshes.

Interspersed throughout are the graceful moves of Amanda White, ostensibly embodying the “sweet” and “fragile.” Yet the scene is a room draped with curtains, with nary a window to be seen. Branches with wilting leaves and piles of broken roses are scattered about from the floor to the drums along with yards upon yards of cables. The band and White all get down and dirty with this detritus, each in their own way. Director Tenschi Haiku’s camera work flits between the characters, highlighting the intricate nature of both humanity and the physical world.

All in all, this is a good introduction to Asterhouse. “Sweet Fragile World” is a passionately rocking, yet very listenable song. If you like what you hear and see here, Asterhouse is set to play the High Dive on Friday, October 21st, supporting Monsterwatch and Gibraltar. You can find tickets here.

Christine Mitchell has been poring over album liner notes pretty much since she acquired the skill of reading, and figured out the basic structure of rock songs at an early age. Whether it’s the needle popping into the first groove of the record, the beeps that signal the beginning (or end) of a cassette tape, or digital numbers ticking off the seconds from zero, music brings Christine happiness, ponderous thought, opportunities for almost scientific study, and sometimes a few tears. When she started attending live shows two decades ago, a whole new piece of the puzzle clicked in and she has been hooked ever since.
Related ItemsAsterhouseChristine MitchellFeatureFour CornersReview
← Previous Story Hatebreed To Perform at Studio 7
Next Story → Despite release their latest album, Synergi