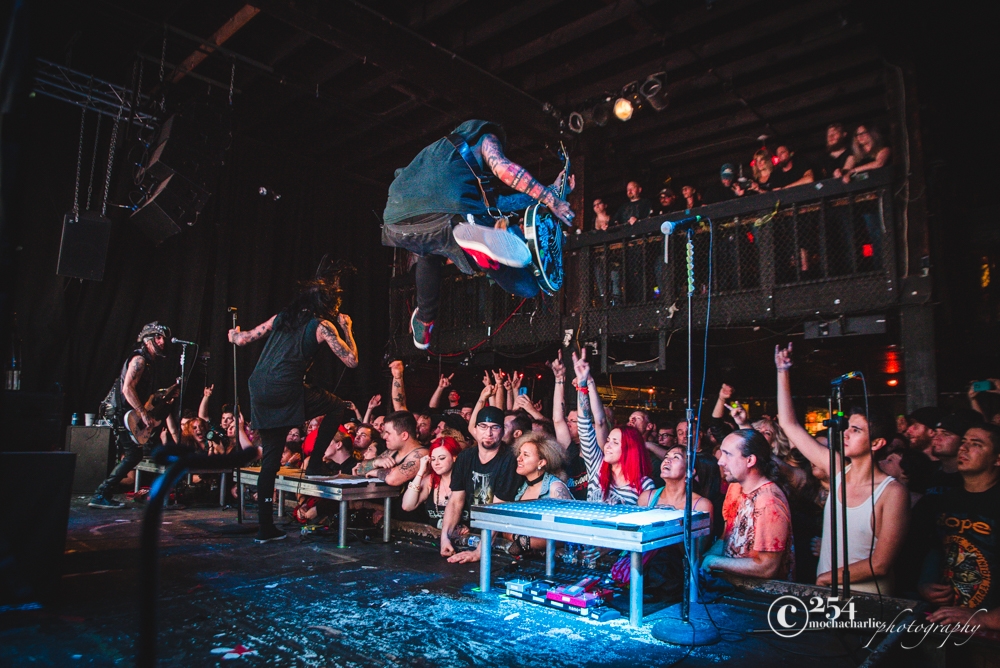 Dope is back! After 19 years of writing and performing, frontman and founder, Edsel Dope, has reunited with its original members for their current tour. Past members Virus, Racci Shay, and Acey Slade have been brought back to rock the stage in front of fans as they are out on the road promoting Dope‘s sixth studio album, Blood Money (Oct 28 ’16). Their current tour, aptly named, “Die MF Die Reunion Tour Campaign,” started in Russia in 2015 and has now migrated through the US. For the tour, they’re playing a wide selection from their entire discography, spanning back to their first single off their first album, Pig Society, to 2009’s No Regrets which includes “Rebel Yell,” a Billy Idol cover.

The tour also features both Motograter, from California, and Flaw, from Kentucky. Flaw unfortunately had to miss a few dates including the Seattle stop due to transportation issues. In their absence, last weekend’s show at Studio 7 in SODO featured sets from five local metal/rock bands, Arisen From Nothing, Massacre At The Opera, Mechanism and Bleed The Stone.

Mocha Charlie is an amazing photographer who has a real passion for music. She covers and shoots several shows per month in and around the region. She a brilliant photo journalist but most importantly, she is also a mother who does her best to balance out her life and live it to the fullest. Mocha Charlie uses her passion and talent to support the community, her friends and family any way that she can.
Related ItemsArisen from NothingBleed The StoneDopeFeatureFlawMassacre at The OperaMechanismMocha CharlieMotograter
← Previous Story DNCE Get Funky At The Fair
Next Story → Tears For Fears Shouts It Out In Woodinville